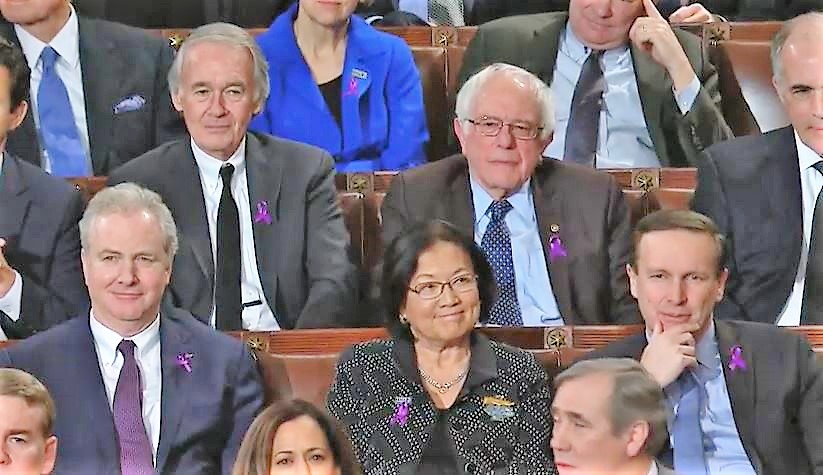 It’s highly likely that the Democrats had prepared a unified strategy in advance for reacting to the SOTU. It probably went something like this:

Show unity. Don’t stand. Clap only for the things you must clap for, and do so tepidly. Make it clear you don’t agree with this racist, stupid, senile presidential pretender. Resist the very notion of his standing there and giving this speech as though he deserves to do so.

Trump surprised them and gave a speech for which they had not prepared, a speech they hadn’t expected: a unity speech, loaded with things they should actually have favored and applauded. Here’s one of the most blatant examples of what I mean, where we have the odd spectacle of a bunch of Republicans cheering a historic reduction in black unemployment and a bunch of Democrats sitting on their hands and refusing to be glad. Note some of them looking at each other for cues as to what they should do:

Worse still, Rep. Luis Gutierrez (D-IL) took a back-handed swipe, complimenting Trump’s delivery, then saying, “whoever translated it for him from Russian did a good job.”

This Luis Gutierrez statement on Trump's speech is something pic.twitter.com/J02zqZ9wnE

In his SOTU speech, Trump caught them flat-footed by emphasizing his Happy Warrior side. Every time the cameras panned on their unhappy faces, they looked sunk in gloom and bile.

It’s a grave danger to underestimate your opponents. The Democrats have gotten used to underestimating Republicans, and it’s not a mystery why. Republicans have often played into their hands. Trump confounds them for many many reasons, but one of them is that he doesn’t play into their hands and yet they perceive that he does. They keep thinking that he has cooked his own goose (or that they are helping him to cook his own goose) and they seem surprised and puzzled every time the situation manages to boomerang back at them.

It’s highly likely that the Democrats’ base loved that the party hung tough against Trump and his populist celebration of America and its people. But the great middle—what did they think? I can’t help but believe that they felt even more estranged from the Democrats than in November of 2016, when that gulf was responsible for the stunning election of Trump the underdog.

A lot—a lot—can happen between now and November 2018. But I don’t see that the Congressional Democrats helped their own cause last night. They were unable to improvise a response that made more sense to most people. Clapping enthusiastically would have seemed like they were approving of Trump, and they didn’t want to do that. But looking grumpy made them seem like they were disapproving not just of Trump, but of America and the success of ordinary Americans.

I don’t see any love of country on their faces.

notamemberofanyorganizedpolicital in reply to Whitewall. | January 31, 2018 at 6:18 pm

But everyone can see their elitist, royal King George, the Third purple posies……

Who were those old racist white crackers over there not showing any love for the success of the black man?

I read on the Babylon Bee that Pence put superglue on the Democrats’ seats. Wouldn’t surprise me if he did. Those Republicans are so sneaky and conniving.

The CBC is probably the most corrupt most indicted caucus in Congress. Maybe most of those guys had hand cuffs and zip ties around their ankles?

This is the very reason why these fantasy narratives are so dangerous for Democrats to indulge in.

Sure, it’s easier to believe your opponents are all racist sexist homophobic knuckle-dragging Nazis who colluded with the Russians to steal the election because they don’t have an argument worth listening to.

Here’s what I don’t get- I’ve been there, I’ve gotten cocky and complacent, and underestimated my opponent and got whooped by an underdog.

But I studied him like a freaking hawk after that. He never surprised me again, and any mistakes I made were conservative ones, ie a prevent defense.

But these Dems… how many more times does Trump have to play them before they realize he’s not really the Nazi Buffoon they made him out to be?

notamemberofanyorganizedpolicital in reply to Fen. | January 31, 2018 at 6:21 pm

….cause Democrats believe Learning is Racist!!!!!!

Like Trump or not but we really dodged a bullet when Hillary and this group lost. Imagine Hillary with the almost unlimited power of the Presidency and this gang of power hungry bunch.

notamemberofanyorganizedpolicital in reply to CrustyB. | January 31, 2018 at 6:22 pm

The lines are being drawn more clearly every day: Who wants the taxpayers, small businesses and multinationals to succeed and grow, thus Making America Great Again? It’s the conservatives.

Who wants minorities and illegals to suffer and fail? Who sits silent and disapproving as good news is announced regarding those whom the lefty, anti-Americans tout as their “peeps?”

It’s only shocking if you’re rags. (no sarc)

Ragspierre is not “shocked”.

The image of the scowling and fulminating members of the Congressional Black Caucus reacting to the Presidents discussion of historically low black unemployment will be indelibly etched in the minds of open minded Americans.

Open minded Americans????? They are not open minded and they are not Americans. There are two kinds of people in this country… Americans and democrats.

notamemberofanyorganizedpolicital in reply to Anchovy. | January 31, 2018 at 7:05 pm

Being mighty generous there, assuming Democrats have any mind left after forcefully giving everyone pieces of it over and over again………

Over on the Democrat side of the hall, it looked like a funeral. And it’s pretty clear whose it was.

That whole thing with noise about “reading the memo” was great “battleground prep”.

The Dems behavior that night was disgraceful and on open display. That they did not stand and applaud during those times when it would have been entirely appropriate and nobody decent and sane would have faulted them for it, that hurt them badly with the voting public! At least I hope it did, for this year and 2020!

Blacks were already warming up to Trump. Watching the Dems pout that the economy is screwing up welfare dependency may cause a significant number bolt from the Democrat Plantatiion.

The Funny thing is that after ridiculing Trump as the new Hitler,for a year they can’t compromise without being pilloried by their inflamed far left base. It sucks for them and deservedly so

Hey Neo,
I don’t know if you remember me, but I commented on your personal blog. I said this many years ago “I’m of the Boomer Generation” and we need to move off the stage (die naturally) for the good of this country.” I still believe this.

Many years ago? What kind of comment is this? No disrespect intended, but what the [email protected]

I had to come here to drop this gem of a response from Elizabeth Warren, with rebuttal.

I wonder if Nancy has gotten that sesame seed out of her dentures yet.

It was a poppy seed.

“Even though I disagreed with almost everything he said…”

And one would expect anything different from the Commiecrat party.