The state needs new lines for the 2018 midterms. 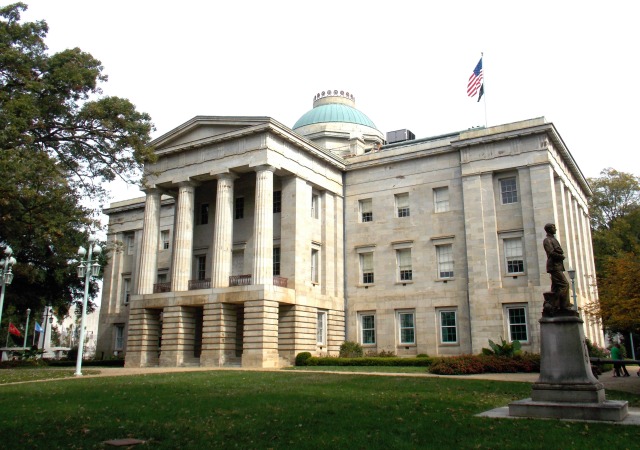 The U.S. District Court for the Middle District of North Carolina has told the state officials must redraw the congressional lines by next week after officials asked for a delay.

Judges James Wynn, William Osteen, and W. Earl Britt explained in their ruling that officials “have failed to meet their ‘heavy burden’ in seeking extraordinary relief’ of staying this Court’s order.”

In the ruling, the judges explained the four factors the officials must have met, outlined in Hilton v. Braumskill:

(1) whether the stay applicant has made a strong showing that he is likely to succeed on the merits; (2) whether the applicant will be irreparably injured absent a stay; (3) whether issuance of the stay will substantially injure the other parties interested in the proceeding; and (4) where the public interest lies.’”

The judges concluded that the motion filed by the state “does not specifically address the four factors set forth in Hilton” and they even think that if the officials did, “they could not satisfy their ‘heavy burden’ to obtain the ‘extraordinary relief’ of a stay of this Court’s Order.”

The Republican lawmakers have appealed to the Supreme Court. Their attorneys tried to use two political gerrymandering cases the Supreme Court is currently considering (one in Wisconsin, another in Maryland) as a reason to delay. From Citizen Times:

But the lower court’s judges — U.S. Circuit Judge Jim Wynn and District Judges William Osteen and Earl Britt — said the cases in the other states are different enough legally that their decision could stand no matter how the justices rule. For example, the Wisconsin matter involves legislative districts.

“Any decision the Supreme Court renders in those cases is highly unlikely to undermine all of the factual and legal bases upon which this court found the 2016 plan violated the Constitution and enjoined further use of that plan,” the judges wrote.

If the state does not meet the requirements, the court will appoint a “special master” to help draw a new map.

The Hill reported earlier this month:

“Having concluded that the 2016 Plan violates the Equal Protection Clause, the First Amendment, and Article I of the Constitution, we now must determine the appropriate remedy,” the court wrote in its opinion.

The court ordered the state to ensure that no further elections are conducted under the 2016 map and to redraw the map before the 2018 midterm elections.

May I remind all LI readers that these voting districts were originally approved by the Obama Justice Department.

notamemberofanyorganizedpolicital in reply to Redneck Law. | January 17, 2018 at 4:50 pm

Then re-drawing is a very good thing!

Gerrymandering is only permissible for the leftists in government.

notamemberofanyorganizedpolicital in reply to Halcyon Daze. | January 17, 2018 at 4:51 pm

Simple solution: Get all Leftists of every party out of governments…….

Sorry, but this is a sanctuary state for the Gerrymander Monster. Pound sand, Uncle Sam. (That’s how it works now, right?)

It’s fascinating how anyone, especially the educated legal class within courts, could expect any other motivation beyond gerrymandering when drawing up districts. The courts only seem to act/react whenever the result is too “obvious”. Whenever the partisan impact is “mild” it seems to be acceptable to the courts.

The progressive concept of “diversity” is racist, sexist, and congruent (“=”).

The court does not recognize individual dignity, but organizes people in color blocs (“diversity”).

While progress is monotonic, it is also unqualified. One step forward, two steps backward. In contemporary use, following voices from the twilight fringe (a.k.a. “penumbra”).

Small quibble on Osteen. He’s William L.Osteen, Jr., appointed by W. Bush. His late father, William Osteen, Sr. was appointed to the NC Middle District by HW Bush.
How is determined to create a combined panel of the Court of Appeals and District court judges?

In order to be absolutely objective in drawing representative districts, the district has to be determined solely on the basis of population while making the shape of the district as regular as possible. This was the problem with the original Gerrymander districts. They were irregularly shaped districts which were designed to benefit a specific political party, race [at that time white voters] or group. The courts ruled that such practices were unconstitutional. However, in the 1990s, this all changed. Suddenly it was ruled that gerrymandering had to be used to ensure that there were districts from which black legislators were sure to get elected. This was done by creating majority minority gerrymandered districts. The reasoning as to why it was acceptable to create voting districts which benefited a both a racial group [Blacks] AND a political party {Democrats] was a little short of logic but long on feelings. But, none-the-less, we are now saddled with legal gerrymandering which always benefits Democrats.

Just another failing of the court system of this great nation.

The NC Democrats soon discovered after their 1991 race-based redistricting that MANY more districts were now winnable by NC Republicans.

When I taught high school math in the 1980’s I required students in my pre-calculus class (during our statistics unit) to re-draw the NC congressional districts (11 at the time) using the 1980 county census data. The districts were to be as compact (‘regular’ blobs) as possible, no county was to be divided between districts, and for an A, districts had to be between 95% and 105% of the congressional district mean.
I apologize for rambling.

You remember when the courts stepped in to throw out the D’s gerrymandering, right?

Welcome to current-day NC politics. The GOP captured control of the General Assembly running in Democrat-gerrymandered districts during the midterms of 2010. The GOP reformed the tax code and the Old North State’s economy ranks as one of the country’s fastest growing so far this decade.

We haven’t been as fortunate in other areas. The 4th US Circuit, not that long ago the most conservative in the country, now is split 50-50 between GOP and Clinton/Obama appointees. Chief Judge Roger Gregory is a Clinton recess appointment from the 2000 interregnum. The state’s three district courts are still GOP-majority controlled, but the Dems have been able to judge-shop in some cases.

While Dems celebrate now, it is far from a slam-dunk reversal of fortune at the ballot box. While our cities have grown more leftist, I live in one of them, the countryside, except in black-majority counties, stills bleeds deep red. We’ll see who turns out in November.

PS–One thing I cannot determine yet. Was the decision on the districts unanimous? Did it have to be unanimous?

PPS–Just registered for the site and might have inadvertently downvoted a couple of comments while I was attempting to reply. I downvote nothing I’ve read so far in this comment thread.

If gerrymandering in NC is illegal, that’s fine, but I want the same rule applied to my home state, Illinois, where Democrats have a hammer-lock on the map-drawing.

The problem is, as others have noted, that Republican gerrymandering is rejected by the court, but Democrat gerrymandering was fine. The Fourth Circuit has repeatedly and, I believe, deliberately, presumed that partisan lines were drawn for racial reasons. Black citizens vote heavily D.

The rejected district lines are less outrageous than some of the D-gerrymandered districts of the past.

Try breaking up a “Minority-Majority” District in ANY State that has one and watch the D’s sue and win in Federal Court.

NC R’s have no choice but to pack minorities, specifically by race, into the existing “Minority-Majority” Districts. They aren’t doing anything that the D’s didn’t already do before them when they created these districts.

“excessively partisan lines” – LOL!! That’s precisely what D’s do whenever they are in a position to redraw districts. Just look at Illinois. They ever get their plans blocked in Court?

“race and not politics” – Black people vote >95% D. There’s really no difference between race vs political lines in a State like NC.

““special master” to help…” – draw the lines the way the Democrat Party wants them drawn, despite the fact that R’s had a Constitutional Right and Duty to redraw them in NC after the last Census. No such thing as a “non-partisan” or “neutral” anything.

Check this ’93 – ’98 congressional district map of NC for an example of Democrat gerrymandering the courts had no issue with. Look at that skinny purple district that’s a million miles long by a couple miles wide, mostly along I85. Well, except where it pulls in some urban centers along the way.

Then guess the race of the representative.