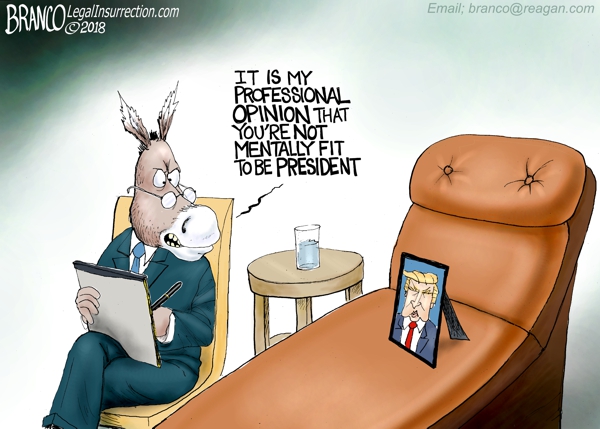 TY, I needed a good chuckle this morning.

The school bully tells everyone you are crazy. What to do? Declare that you aren’t? Pretty lame. Declare that it’s the bully that is crazy. Of course merely interacting with the bully leads to the claim that you have engaged in childish behavior. Well, when dealing with children, the media, you have no choice. Your goal is to make your label stick. Seems to me President Trump is succeeding.

Going on one year and Obamacare is still the law of the land.

McConnell and Ryan are failing.

notamemberofanyorganizedpolicital in reply to Firewatch. | January 8, 2018 at 4:55 pm

“Failed” – past tense, as in Ryan and McConnell are RINO history already.

Yes, but at least the mandate has been repealed and the president is turning to regulation reform to unravel more of it (because the GOP failed at full repeal).

And Hillary is still walking around footloose and fancy free unlocked up, and Trump disbanded his voter fraud commission.

To remove the president by impeachment, you need the following:
(1) a simple majority in the House
(2) two thirds of the senate

The 25th amendment is good for two situations: (1) When the president does not object to his removal but is unable to resign (e.g. because he’s in a coma); (2) When a much-loved and respected president must unfortunately be removed, but nobody wants to humiliate him by impeachment. Obviously neither of these situations are applicable to the effort to remove Trump.