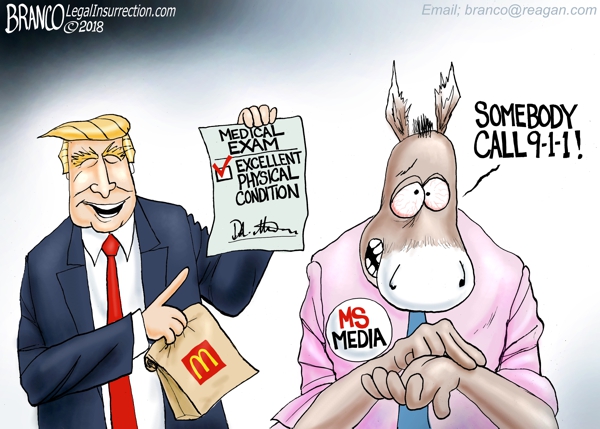 I would like every one of those journalists to walk around in a bullet proof vest whenever they appear in public. Then complain how President Trump looks heavy. Ejits.

Trump has provided more cynical entertainment to the US than at any time when his TV show was on. As examples:

The hits keep coming. Personally, I think Trump is an egotistical jerk, but I think Maureen O’Hara said it best in Big Jake:

notamemberofanyorganizedpolicital in reply to georgfelis. | January 18, 2018 at 3:35 pm

“Throughout scripture we see God using imperfect people for the sake of his mission.

Here are some examples of people that were used…
•Abraham -Was old.
•Elijah – Was suicidal.
•Joseph – Was abused.
•Job – Went bankrupt.
•Moses – Had a speech problem.
•Gideon – Was afraid.
•Samson – Was a womanizer.
•Rahab – Was a prostitute.
•Samaritan Woman – Divorced.
•Noah – Was a Drunk.
•Jeremiah – Was young.
•Jacob – Was a cheater.
•David – Was a murderer.
•Jonah – Ran from God.
•Naomi – Was a widow.
•Peter – Denied Christ three times
•Martha – Worried about everything.
•Zacchaeus – Was small and money hungry.
•The Disciples – Fell asleep while praying.
•Paul – A Pharisee who persecuted Christians before becoming one.

“And we know that in all things God works for the good of those who love him, who have been called according to his purpose.” -Romans 8:28

The opium dealers and their opium seeking customers with the shakes desperately seeking something to quell the pain of their collapsing world view narrative.

I hope it gets plastered all over everywhere.
Leftists need triggering everyday or they can’t move out of bed. LOL

I’m thinking that all members of Congress should be required to take the Montreal Cognitive Assessment and have their scores made public.