Branco Cartoon – Do You Hear It?

Branco Cartoon – Do You Hear It? 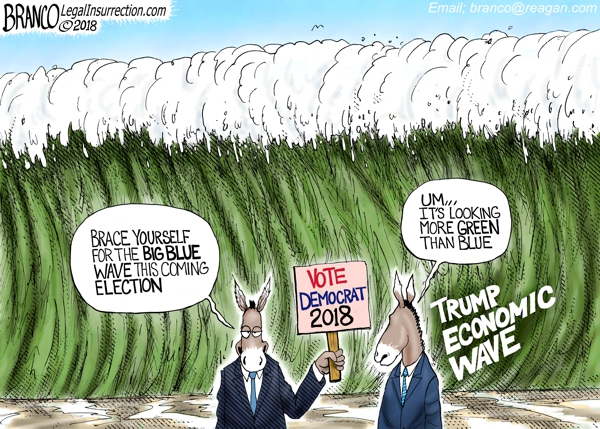 Too many bubbles, something is going to pop.

If they kill Obamacare, I think we’ll see another meteoric rise as households start to go back to paying about what they used to for health insurance.

The guy remodeling my house has to pay 1850/month for him and his wife for the privilege of having a 10k/year deductible. He’s had at least one plan cancelled on him. This used to be about 1k/month. Tell me what he’s going to do with the 850 when it goes back into his household budget.

Trump-anomics works, we’ve seen it before.

I’m all for letting people keep more of their own money and spend it how they see fit.

I’d like to see some serious spending cuts to go along with the tax cuts.

“On what basis?” Just the facts. Housing prices are essentially back where they were prior to 2008. Credit quality is crap… this was pumped to the bursting point by Obama’s QE series.

We have a bubble in student loans with huge delinquencies and millions of borrowers who can’t afford to pay off their six-figure loans with their underwater-social-justice-basket-weaving degrees. Do you think the pols will let these people go bankrupt, or do you think they’ll bail them out?

The auto lending market is also a sub-prime mess. Equity valuations are higher than they’ve ever been and have been on the longest run in history. The speculation going on in crypto-currencies right now looks like the frothy crap that has precipitated virtually every prior market collapse.

My point is that there are multiple shit-shows ready to commence in this economy and if anything bad happens it will be Trump’s fault. The media covered for Obama blaming everything on Bush for eight fucking years, but ANYTHING bad happening now it will be squarely on Trump.

But more recently I’ve heard.. Well the fundamentals are sound.. we’ve had all this QE and low interest rates. Maybe Edu, HC, housing, and stock markets are signs of inflation. When the labor market tightens and if wages rise it will lead to higher general prices and we’ll finally see inflation. But to me that seems like wages are finally rising to the level of everything most other costs..

Either way the timing may be fantastic for 2018 if unemployment is moving towards 3.5% with wages creeping up and the stock market still way up.

I heard someone on Bloomberg recently say that the consensus is the Federal Reserve will raise the Fed Funds rate 3-4 times this year. He didn’t say by how much. I assume a quarter interest point with each hike. That would be a full 1%.

That shouldn’t cause recession, but it may retard the impact of the fiscal stimulus created by the tax cuts. And it clearly signals a shift in monetary policy away from the loose regime that’s been in place since 2008 toward a tightening policy.

I don’t know what will happen. But people anticipating a re-run of the Reagan economy after he cut taxes may be disappointed. Reagan had lots of tailwinds that Trump does not have. After the ’82 recession, the Federal Reserve began to aggressively loosen monetary policy. As I just noted, the Fed is expected to be pursuing a tightening monetary policy at least over the next year.

The financial system under Reagan was dramatically deregulated with DIDMCA (Depository Institution Deregulation and Monetary Control Act); Mike Milken had just invented the high yield “junk” bond market, creating new financing opportunities to grow businesses that previously could not get credit from commercial banks; and there was lots of new technology requiring massive investment (like cable TV systems and cell phone systems) being built out.

We’ll see how it plays out. Reagan’s tax cuts were like rocket fuel because he had lots of other things working to boost economic growth that the economy in Trump’s era does not appear to have.

The tail wind the Trump economy has is cutting the dead weight of regulation and taxes.

The other thing that has not really gone into effect is the number of people not working because it pays more to sit at home and do nothing.