“Americans are dreamers too”

“Americans are dreamers too” 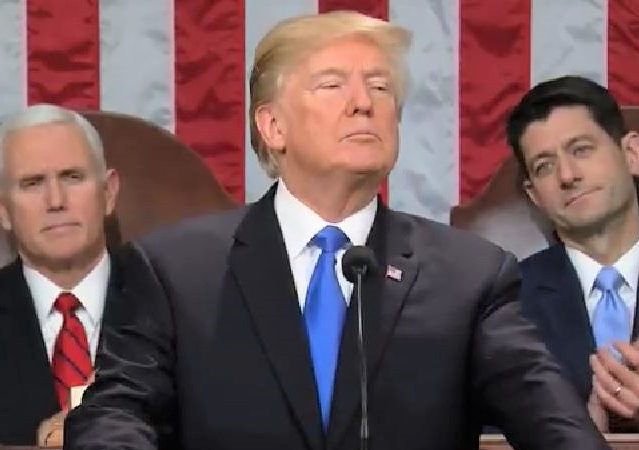 Here’s my quick take on Trump’s State of the Union address. I’m not going to catalog the speech, just my impressions.

It wasn’t a soaring speech. The speech was a catalog of accomplishments and promises of future success. It was very Bill Clintonian in that respect. You could sense Democrats fuming.

I don’t know what the “goal” of the speech was, but if it was to take a positive message directly to the people without the media filter, it succeeded.

There will be a takeaway, a line by which the speech will be remembered. That line was “Americans are dreamers too.”

Here are my tweets in real time:

"The #SOTU is strong" pic.twitter.com/O2RhKutAAk

first time i’ve watched one of these in at least a decade, likely longer.

EPIC is not too strong a word to describe tonight’s performance.

Me too, and I agree, he came across like the very voice of reason.

But as we keep discussing here daily, the state of the union is not strong. Unless you think a slow motion coup constitutes strength.

Please forgive my ignorance, but are those two in that last Tweeted image Congressional Representatives? And they are crying?!

If so, I am sure that Trump surviving a year, that watching their plans and schemes foiled time and again, does bring a tidal wave of tears to their eyes. This speech, with every word and phrase, must be like daggers to their hearts (if they can be found). And the applause and cheers – well, we can see they were holding back the wailing, the wracking sobs.

those are the mother & father of one of the girls the MS-13 animals murdered.

the ones the members of the Black Caucus couldn’t be bothered to stand for.

The congressional Black Caucus is completely FOS. They are the nancy pelosi’s of black cauci.

Thanks – I had no idea who they are.

Now I understand their tears. Grief like that is unimaginable.

Not to crazy pelosi. Watch at her chew her cud:

I have noticed to my sorrow in the last couple of years that you can move on from a loss to the point that everyone, including you, thinks things are back to normal, and then in a second, someone says something and you’re back standing over the coffin like it happened yesterday. It was courageous of them to share their grief with America–to relive that moment in the hope that another parent might be spared.

It never gets back to normal, you just live with it. And it only takes the slightest reminder to put you back in the hopeless place of sorrow.

Those folks had the courage to sit at the SOU address knowing what it would do to them.

i was intrigued by the comment about him appointing someone to SCOTUS this year… i wonder who?

Ruth Baden-Meinhoff Ginsberg wasn’t there, and Kennedy has been mumbling about pulling the plug, and then there’s the Unwise Latina who’s likely diabetic…

anyone got a Ouija board?

RB Ginsberg sleeps through the SOTU speech no matter who gives it. This year she slept at home instead in front of the POTUS.

Maybe over of ‘international law’ and fake oath-taker ginsberg will take a trip to the North Korea and try and steal a poster.

“Justice Ruth Bader Ginsburg of the Supreme Court embraced the practice of consulting foreign legal decisions on Friday, rejecting the argument from conservatives that United States law should not take international thinking into account.”
http://www.nytimes.com/2005/04/02/politics/justice-ginsburg-backs-value-of-foreign-law.html

RBG should not be sitting on SCOTUS because she neither believes in our system of laws nor in our Constitution. At this point, she’s no different than having a foreigner as a justice.

And not any foreigner: a leftist freak.

Good one and fits the name fairly well. The Red Army Faction, AKA Baader-Meinhof Gang.

I don’t think that he mentioned being pro life,but the police officer and his wife who adopted the child was a strong message about life,even when the situation is hard. Powerful!

“Does this 3td house make me look fat?” said the shameless socialist.

A socialist in name only. A criminal in name.

Bernie and Jane Sanders, under FBI investigation for bank fraud:

I was driving from the SF Bay Area to Tucson so I only heard the speech, no visuals (thank you to Sirius Radio.) My take-always:

Best line – “Americans can be dreamers too.” Brilliant! I want my children and grandchildren to be “American Dreamers!”

The stories – I liked how Trump deftly wove in personal stories of real people to illustrate his points. Well done, and it makes his positions easier to remember.

Most touching story – the terrible loss of the parents of the two teenage girls. I cried listening to it. Unimaginable pain. How especially touching when Pres. Trump said 350 million people grieved with them tonight. He put faces to the usually faceless families of victims.

Tenderest story – the family who adopted the baby of an addict. I appreciated Pres. Trump including the line that God told this young man to care for the baby. I like that Trump is comfortable talking about and using the name of God. It is refreshing.

I didn’t see it, but in the (hours of) commentary that followed the speech many said the most riviting visual was the Korean man who held up his crutches. That, and Pelosi’s face. Boy, did I hear about Pelosi’s face! I look forward to watching both of those.

Some woman on NPR is claiming that “Americans are dreamers too” is offensive and cruel, because it means DREAMers aren’t American. Which of course is the whole point of their predicament. They’re not American, and are asking the American people, out of the goodness of our hearts, to give them the right to stay here.

I’m as sympathetic to their cause as the next person, but if it were up to me I’d require, as part of any deal, that in order to get legal status they must read aloud and sign an acknowledgment that they are not Americans, that they don’t have the natural right to remain here and are therefore grateful for the free gift they’re being given, that they pledge to respect and uphold the law, and accordingly that they condemn as criminals those who brought them here illegally.

I’m not as sympathetic. Sorry. Because 1) you can go back. I’m not buying the crap they were all hauled across the border as babes in arms. So 1) I’m going to need proof. A lot of them came over as 16 y.o.s

And 2) I’m going to need proof. My dad didn’t start elementary school until he was six. What, all of a sudden you’re an English poet when you cross the border?

My dad didn’t start speaking English until he was six. He later became a USCG Radioman. Start with the bull**** people.

By definition, DACA people were under 16 when they came here.

I damn near cried when he talked about illegals killing Americans. And in case you might have missed it next to my paisan Manilla John I’d choose this guy for my sidekick.

Damned straight and they are citizens not Illegal Aliens !

Trump put on a really good show, but the substance was mixed. Much of it was good, or tolerable, but the $1.5 trillion infrastructure program is nothing but a political boondoggle that we can’t afford — like the last one, the money will be pissed away for the benefit of the state and local political entities who end up with the money, and there will be little to show for it in the end. Legalizing millions of illegal aliens will be a disaster, and whatever supposed limits there are will disappear if it happens. Family leave isn’t something that government has any business being involved in, and certainly not ordering employers to pay for it when many can’t afford to. Unfortunately, these bad things are the most likely to make it through Congress, and in an even worse form than Trump proposes. Good speech, but too many bad proposals — hopefully Congress will fight over the details and do nothing.

The Americans are Dreamers too line killed the Dems for 2018. Either they agree or disagree, no middle road.

They were playing on the Iphones while in the chamber.

The DNC is broke. People are happy with their paychecks and jobs. Trump is stabilizing (this week at least, and the HUGE corruption of the FBI/DOJ by Obama-HRC will come to light.

If they are not careful, they will be swept up in a wave and all thrown out of office. Then the will have plenty of time to play games.