What does the GOP tax overhaul mean for you?

What does the GOP tax overhaul mean for you?

Plug in your numbers to find out 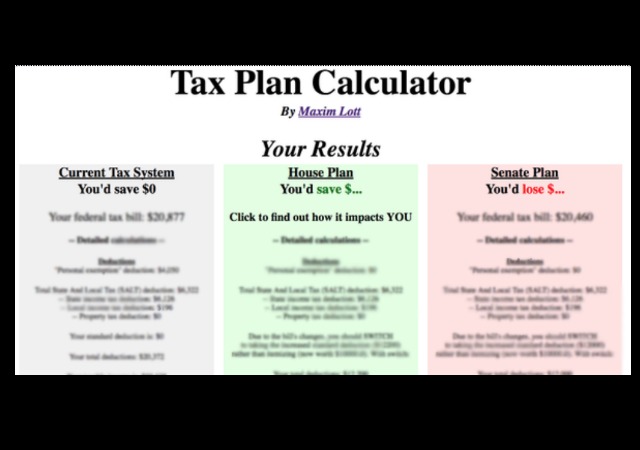 The Republican plan to overhaul the tax system was met with inordinate amounts of drama and opposition. But was it necessary?

A Senior Producer for Reason, Maxim Lott, created a tax calculator he claims shows the impact of the GOP tax plan.

By completing 8 fields, users are able to see how their taxes are impacted by the current system, by the Senate version of the bill, and by the House rendition.

Will tax bill help or hurt you? https://t.co/B2tTJQPA7N will tell you!

Based on his calculator, it appears as though households making $130K per year or less will benefit most.

So far, users are claiming the calculator has helped to demystify a contentious bill and the nasty rhetoric surrounding it.

One important thing I glean from @maximlott's tax calculator is that large numbers of people will be freed from burdensome calculation of deductions. https://t.co/BdnHm77zQF

Don't let #Dems spread #fakenews about #TaxBill, it's not #TaxBillScam! Plug your numbers into @maximlott's Tax Plan Calculator below to learn the #Truth.
Thank you @HouseGOP @SenateGOP, my Army soldier son will save $1500 in 2018! https://t.co/5kNXTRiTbv

If that calculator is correct, then I see all the MSM and blog sites pushing the “no real change” talking point is a big lie.

Those aren’t small potatoes for most of the U.S. middle class!

snopercod in reply to notamemberofanyorganizedpolicital. | December 4, 2017 at 3:57 pm

I ran my numbers through that calculator and the “existing” tax due was off by over 100%. I think the problem is “what qualifies as income?”. How is Social Security treated? Dividends? Capital Gains? You can’t just lump all of those into “income”.

SS is income. 85 percent, or some mysterious percentage derived from a worksheet.

The best part of the new law is simplification. It will be much harder to bullshit people if they can’t pretend it’s too hard to calculate.

This could be yuuuge.

We need a calculator to see how soon our Republic will fall every year we fail to destroy the GOPe.

That guy needs to add some way of calculating how many people your tax savings will kill. According to MSNBC its about 10,000 a day.

Please elaborate how these people will be killed. You are fear mongering here.

Technically, you’re not saving money as the government is running a deficit. Rather, U.S. citizens are collectively borrowing money against the future, with interest.

As a CA resident it just hurts either way. Although, I am principally for either.

I did a couple of different projections of income/expenses and came out either neutral or saving about $1,500. But,I have flexibility concerning recognition of income & expenses.

I am wondering about people who may have had a Good Till Canceled (GTC) order on taxable portfolios. I have alerts, not orders, so I was not impacted. I set alerts to let me know when the stock goes within a range so I can re-evaluate the stock. But, for those who had orders traded based on a temporary dip may be looking for at their stocks to sell to avoid a capital gains impact at year end. But, either action may not have been the best action for their overall portfolio.

My results said my savings is going to kill 82 people.

I hope everyone realizes how many poor people you are killing by just USING this calculator!!

I allowed for that by not using the real numbers.

I should have thought of that!

So the calculator is like Soilent Green? Every time I press enter, one of the 47% get’s off’ed?

I’m dubious of the accuracy, but I could pay for a kitchen remodel with the difference.

I look to be in the 2k range hypothetically but don’t think it will actually happen that way.

Also, if they make these cuts without spending cuts then our debt is going to rise even faster than the GDP can increase.

I’m expecting $0-100 in savings. I’m single, and nearly all the savings in these plans are directed at parents or couples. Since couples generally do not have twice the house and twice the income, the huge increase in the standard deduction is much more valuable to them than to singles.

Calculator says..[drum roll].. save 1500 – 2000.
That’s married and living in California. It recommends the $24K standard deduction as it exceeds itemized deductions.

With reconciliation looming, this is still a moving target, but now its hemmed in a bit. Its infuriating that for months we have been bombarded via the media (and some bloggers) that there would be no benefit for the middle guys and that this whole tax thing benefited the rich,etc, etc. The left’s propaganda machine is working overtime to keep the narrative alive.

@ Randian: Don’t go getting married just for the increased deduction. There may be hidden costs…

I’ve seen blaring headlines all over the place about the tax bill doing away with medical deductions and now I am hearing that it does not cover cancer treatment for seniors and others. Is this true? could someone address this in depth? Thank you.