Or as some call it, America’s first Christmas 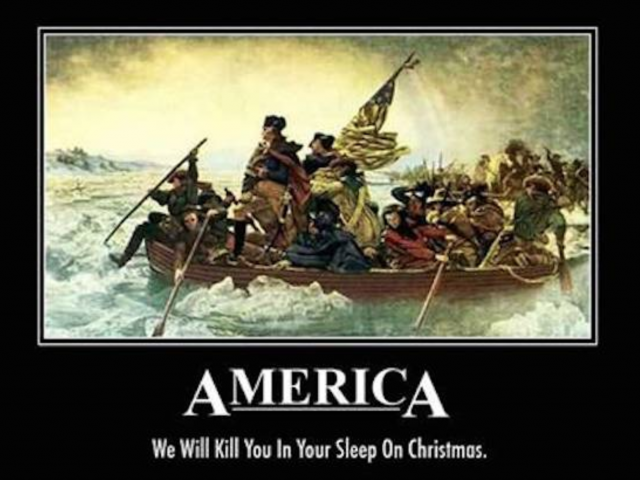 Before America was free of the chains of unrepresented, overtaxed tyranny, we had to best the greatest army in the world.

In a make or break moment for the Revolutionary War, General George Washington concocted a plan to cross the Delaware River and lead a surprise attack on the Hessians camped around Trenton, New Jersey. A victory in Trenton would boost morale, Washington reasoned.

A rash of “false alarms” and the arrival of a nasty winter storm put the Hessians, who’d been warned of the possibility of an attack, at ease. And off to sleep, they went. Many for the last time.

Washington’s Trenton attack was a success and the rest, they say, is history.

Interesting fact, also pictured in the iconic 1851 Emanuel Leutze painting, Washington Crossing the Delaware, James Monroe (he’s holding the flag). Though no historical records have put him in the boat with Washington, he was with Washington when the plan to attack Trenton was devised.

David McCullough’s “1776” offers a concise summary of the Battle of Trenton – truly a Christmas miracle!

hillary klinton being booted aside by voters after 8 years of a traitor occupying the White House is miracle enough. But the incredibly unique man who won the election in instead of klinton, is miracle in of itself.

The creation of a man like Donald Trump, and his being in the White House at this point in our history, could just be two divine interventions.

It’s not without precedent:

” The exhausted Washington, presenting his military resignation before Congress at the end of the war, brought the chamber to tears as the insisted that only “a confidence in the rectitude of our cause, the support of the supreme power of the union, and the patronage of heaven” sustained him and the army through the hellish war. His voice breaking with emotion, he commended “our dearest country to the protection of Almighty God.”
https://www.thegospelcoalition.org/blogs/evangelical-history/the-faith-of-george-washington/

Compare, to the dope-smoking, cocaine-snorting, selfish, corrupt America-hating weasel who was president for past 8 years. Or to the socipath bill clinton before him. Or to the pathetic, talentless, dangerously corrupt hillary klinton who attempted a coup. Or to the establishment hack that is Jeb! Bush, who has greater allegiance to a corrupt political party than he does to his country.

I also recommend “Washington’s Crossing” by David Hackett Fischer for the full story including what preceded and what followed the attack on Trenton.

Future President Monroe was, in fact, the fellow who attacked the Hessian pickets in the outlying farmhouse, killing them before they could send a signal back to Colonel Rall, their commander back in Trenton.

A fairly recent movie changed that to Alexander Hamilton, oddly enough. Hamilton was at the battle, but didn’t attack any farmhouses.

An officer named Washington, thought to be a cousin of George’s, accompanied Monroe. I believe he later led the cavalry during Dan Morgan’s defeat of the notorious Banastre Tarlton’s dragoons at the Battle of the Cowpens.

Can you imagine obama being part of that?

The only question would be: which direction would he run away in?

Oh, it got even better. So that gunfire wouldn’t alert the Hessians in town, Monroe and his companion had to dispatch the sentries with their sabers.

Trenton would not have happened if it had not been for Abraham Woodhull, the chief spy of the Culper ring. He gave Washington the intell to make it happen.

I’m fond of this version that I ran across this year.

Imagine if obama was around back then? — We’d have never heard of benedict arnold!

That is why George Washington and his troops were unbeatable, even though they lost lost battles!