“In terms of politics, I think I’ve got a lock on the free pony thing.” 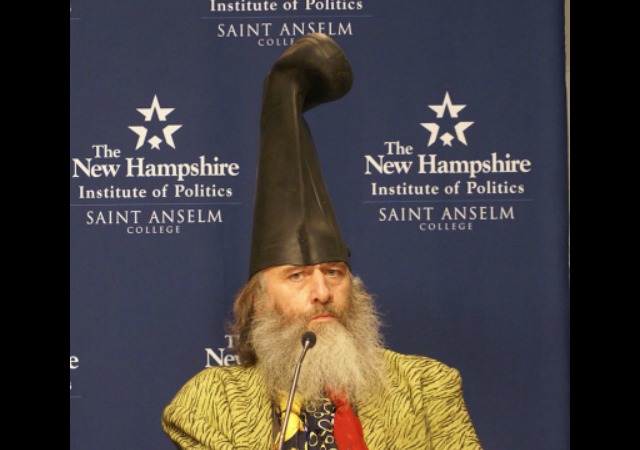 Vermin Supreme, the guy who wears a boot on his head and ran for president as a Democrat in New Hampshire in 2016, has reached a settlement to bring his ponies to protest a book signing by failed Democrat presidential candidate Hillary Clinton. From The Associated Press:

Vermin Supreme, who ran as a Democrat in 2016, wears a rubber boot on his head and once threw glitter at another lesser-known candidate during a debate. He asked a federal judge Friday to compel Concord to issue him a permit allowing him to bring the ponies to Clinton’s event, scheduled for Tuesday at a bookstore in the city.

The licensing officer who denied the permit request citied police coordination with the Secret Service for Clinton’s event, the lawsuit says. Supreme had claimed that refusing to issue him a permit violated the First Amendment.

But on Monday, city attorney Jim Kennedy said the two sides had reached a settlement allowing Supreme to bring his ponies to the event. He will be given a parking spot across from the bookstore.

Supreme said Clinton’s book, “What Happened,” attacks his political platform to provide everyone in the country a pony. The book makes references to a satirical Facebook post about the main candidates seeking the Democratic presidential nomination, Clinton and U.S. Sen. Bernie Sanders, and their positions on giving people ponies. The post inferred that Clinton was against it.

“In terms of politics, I think I’ve got a lock on the free pony thing,” he said. “I firmly believe and claim that it is a slam at my policies.”

Supreme has run in New Hampshire’s presidential primaries going back at least to 2004. In 2016, he was banned from a traditional debate for lesser-known presidential candidates at the New Hampshire Institute of Politics because four years earlier, he threw glitter at another candidate in the middle of the forum.

There seems to be little news other than rumor yet regarding counter protests against the environmentally reckless glitter dumping and animal exploiting Vermin Supreme event.

This is hilarious. And the best part is that this Vermin Supreme makes more sense than Bernie – Vermin is promising ponies which he actually has; Bernie promised freebies which were never, ever going to happen. The Democrat Party and its favorite socialist-hanger-on are a joke.