This includes allies Russia and China. 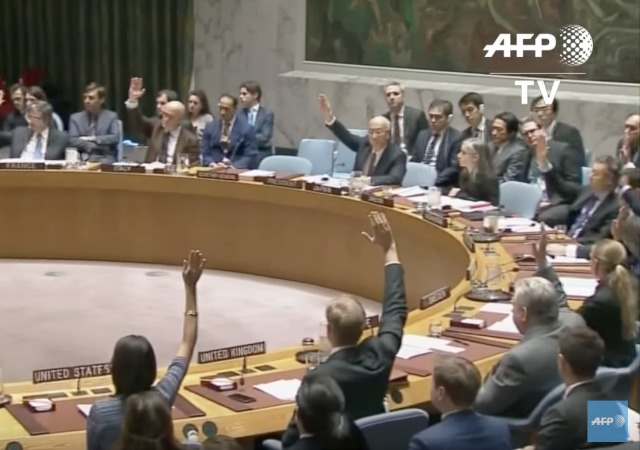 The resolution leaves out a few tidbits according to The New York Times:

But the resolution does not permit countries to hail and board North Korean ships in international waters, which the Trump administration proposed earlier this year. That would be the most draconian measure, because it would enable the United States Navy and its Pacific allies to create a cordon around the country, though Pentagon officials say it would also carry a high risk of triggering a firefight between North Korea and foreign navies.

The move comes less than a month after the hermit kingdom launched another missile test. From The Washington Post:

“With this system, we can load the heaviest warhead and strike anywhere in the mainland United States,” North Korea’s most famous newsreader, Ri Chun Hee, said in a special live broadcast on state television. “This missile is far more technologically advanced than July’s Hwasong-14. This signifies that our rocket development process has been completed.”

Kim Jong Un, the North Korean leader, had personally authorized the launch, Ri said, a photo of Kim at his desk and the handwritten order appearing on the screen.

The missile reached “a height of 2,796 miles and traveled 596 miles, demonstrating the potential to reach a range of 8,100 miles.” Physicist David wright said that the missile “would put any part of the U.S. comfortably within reach of a North Korean missile strike.”

Unlike the last two tests, North Korea didn’t shoot this one over Japan. Instead, it landed in the waters between North Korea and Japan “after flying on a lofted trajectory that took it deep into space before reentering the earth’s atmosphere.”

After the launch, China criticized North Korea, but asked other countries “to refrain from measures that would exacerbate tensions.” Foreign Ministry spokesman Geng Shuang didn’t really respond to a question about more sanctions, but promised that the country will “uphold the principles of stability and peace on the Korean Peninsula.”

But how much more can they do? White House Homeland Security adviser Thomas Bossert said America is “running out of sanctions options.”

what may happen if the NORK missile would
unexpectidly blow up during ascent ?
after all ‘accidenta; do happen.

Not to worry. Most of us read typo.

I keep reading about the “stunning rebuke” Trump received at the UN yesterday (in a completely meaningless, non-binding resolution) and today this. Now, crickets.

Our news is stupid. Fortunately, neither our populace nor our allies are stupid when it’s important. Israel is not dangerous. NKorea is.

Especially when the “stunning rebuke” was essentially the UN members saying “We hate Israel, and we’re outraged that you don’t hate Israel as much as Obama did!”

There are some disturbing similarities between the current situation and the run-up to Japan’s entry into WW2.

In both cases, a myopic, belligerent political/military class refused to back down to economic sanctions. In Japan, they went so far as to refuse to heed the advice of Admiral Yamamoto, who, I believe, warned the leadership about pissing off Americans.

The Japanese didn’t bother to actually threaten us. They simply attacked, not realizing how REALLY pissed off we could get.

Kim of Korea has mistaken General Mattis (a MARINE) and President Trump for the sissy-mary obama.

Kim may well give in to pride and foolishly escalate this to the point of violence, but has neglected to play it close to vest against an adversary who can vaporize his country.

Kim can not back down. If he does, he will be deposed. If he continues, it is almost certain that North Korea will end up in direct military conflict with the US and her allies and will be deposed. Essentially, he has no useful options now. He can’t stay and fight and he can’t run, or he will be hunted down by whoever takes his place and killed.

Actions are apparently taking place in N. Korea which might allow Kim to remain in power longer. such as potential rivals disappearing. But, sooner or later the wheels are going to come off and something is going to happen. What it will be is all a matter for debate, at this time.

Should this not have been done 20 Years Ago?

North Korea and IRAN should be given a simple order:

CEASE all nuclear activity or be destroyed. Why are we so stupid?

I think it’s genetic. I recall throwing up our hands back in the late 90s as the Iraqis were shooting at us and the MEDIA WAS WONDERING IF WE WOULD BREAK THE CEASEFIRE. They do the same thing to Israel. Hamas can fire all the rockets at Israel they want. And they turn their focus on Israel. Will Israel make things violent, they wonder.

I do have to agree with the critics on one thing. We shouldn’t have stayed for the nation building. We just should have done the nation breaking and left.