This Woman Really Wants a Baby With a Ghost

This Woman Really Wants a Baby With a Ghost

You get some, Casper! 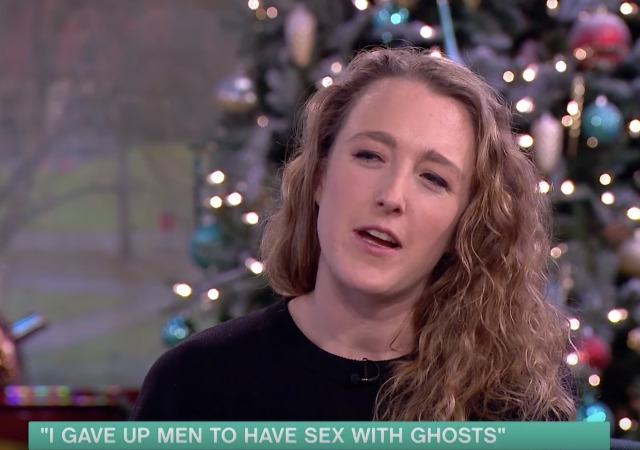 You know, I spend a lot of time on Twitter to find news stories. But sometimes you find something so unbelievably WEIRD. Like this woman who has sex with ghosts and really wants a baby from one. From International Business Times:

Amethyst Realm, who is a 27-year-old spiritual guidance counselor, appeared on “ITV This Morning” Thursday to detail her active sex life with ghosts. Realm claims that her first sexual encounter occurred 12 years ago after she moved into a new home with her then-fiancé. She soon felt the “energy” of a supernatural presence.

“It started as an energy, then became physical,” Realm told the show’s hosts. “There was pressure on my thighs and breath on my neck. I just always felt safe. I had sex with the ghost. You can feel it. It’s difficult to explain.”

“There was a weight and a weightlessness, a physical breath and stroking, and the energy as well,” Realm added.

Her love affair with one ghost, in particular, apparently lasted for three years. The relationship fizzled out after she was busted by her husband. He had come home early from work one day to allegedly see a shadowy figure of a man by the window. She then claimed to have engaged in several sexual encounters with numerous other ghostly presences, however.

While the show’s hosts attempted to argue that Realm could potentially be experiencing symptoms of sleep paralysis, she begged to differ. Realm has conducted research into the possibility of becoming pregnant by a spirit because of her interest in finding one to settle down with in the future.

“I’ve done a bit of research into phantom pregnancies,” Realm said. “There’s a possibility that it is a ghost in you, but people don’t know how to carry it to full term.”

So how’s she going to hit him up for child support?

Somebody dodged a raging dumpster fire. She should be required to warn any future living men she can attract much like a sex offender needs to notify his neighbors.

The next step: “She” will claim to be a man, and attempt to impregnate female ghosts.

Then she’ll demand a right to enlist in the U.S. Army! And perhaps sue when she discovers that her taxpayer-funded transition does not enable her to impregnate ghosts. Or even living women!