“The author of this column has jeopardized the atmosphere of inclusivity” 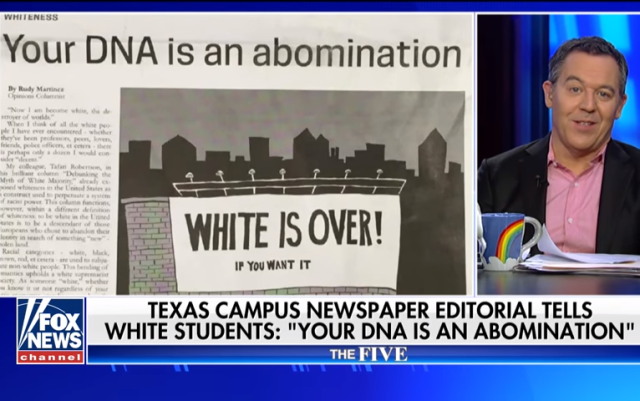 The backlash from this student’s column must have been awful for them to let him go.

The University Star, the student newspaper at Texas State University, has fired the author of a controversial opinion piece that proclaimed “white death will mean liberation for all” amid calls from a growing chorus of students that the paper should be defunded.

“The author of this column has jeopardized the atmosphere of inclusivity at this university and will no longer be published in The University Star,” stated an editors’ note atop an apology note to readers from the Editorial Board which stated “we screwed up.”

The board pledged to install a more rigorous column vetting process, noting “we fully acknowledge the repercussions of our actions in allowing for such an incendiary and divisive column to make it into print. We were unequivocally wrong in printing it. It was neither constructive nor appropriate.”

The apology came two days after the Nov. 28 op-ed “Your DNA is an abomination” made national headlines due to its aggressive language celebrating “white death.” This caused anger and angst among many Texas State students who perceived the article to be blatantly racist.

I’m glad to see they banned the little racist piglet from further publication in the student paper. We crackers have no monopoly on racism… the Latino variety can be especially nasty and virulent. I expect this kid has been brought up in the “reconquista” brand of ethnic cleansing fantasies.

The truth of the matter is that Texas State (or Southwest Texas State as I remember it) is well above average in it’s diversity and little community agitating “intersectionality” grievance mongers like this punk need to go away.

Apparently diversity isn’t all it’s cracked up to be.

I don’t understand. Was it wrong that this guy wrote the article, or that the newspaper published it? So, this guy is probably a bigot, but there are bigots everywhere. But the newspaper management broadcast the bigot’s message with the full force of its business and capital resources, and by this action implicitly endorsed it (at least temporarily). So, who should be fired?

Exactly … one idiot pens the article and other idiots review it before publication and then publish it. They all should be fired.

The kid who wrote the article needs some de-fragging of his “hard drive” (i.e. brain) because of this indoctrination, this brainwashed ideology he regurgitated – in a very well-written manner, as Gutfeld points out – in the heinous, racist article.