“This weekend I’m stocking up on portable phone chargers, warm clothes, & gear needed for when we take the streets” 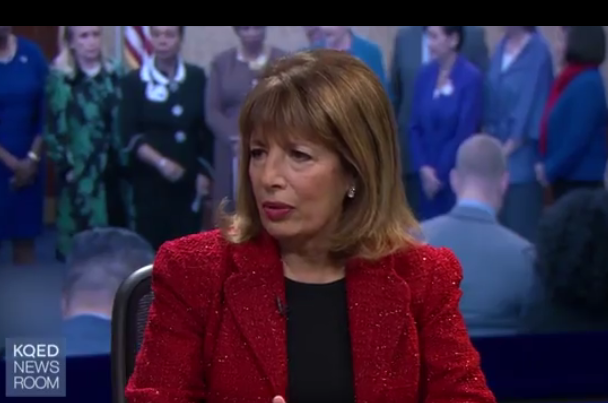 Apparently, some obscure Representative no one has ever heard of mused about whether or not President Trump will fire Special Counsel Robert Mueller next week, and the entire #Resistance freaked out.  They are hastily organizing spontaneous protests should Trump indeed fire Mueller, and Twitter is abuzz with their frenzied outrage . . . and a good bit of well-deserved mockery.

The Hill reported yesterday that Representative Jackie Speier (D-CA) appeared on some local PBS channel and shared that there’s a “rumor” that President Trump is giving a major speech next week and that he intends to fire Mueller on December 22nd.

Congresswoman Jackie Speier (D-San Mateo) told KQED Newsroom on Friday that she believes Republicans are trying to shut down the House Intelligence Committee’s probe into alleged Russian interference in the 2016 elections.

Speier also said, “The rumor on the Hill when I left yesterday was that the president was going to make a significant speech at the end of next week. And on Dec. 22nd, when we are out of D.C., he was going to fire Robert Mueller.”

If this were to happen, Speier said, it would cause a constitutional crisis.  “That is Saturday massacre 2.0,” she said. “Without a doubt there would be an impeachment effort.”

He also tweeted the following:

Rank-and-file “resisters” are very fired up.

10th street Sacramento for me. I will be the loud one!! pic.twitter.com/AJWIptGLTD

We should be in the streets right now, demanding that Congress protect the Mueller investigation. I'm writing and calling like mad, but I feel we need to do more.

The fear-mongering and alarm doesn’t stop there; they’ve got some sort of “rapid response team” thing going to organize protests across the country.

Find #MuellerRapidResponse teams in your area. We need huge numbers on the streets at any attempt to fire #Mueller. https://t.co/amt9jTIbMh pic.twitter.com/jCemWYMGUo

Not everyone is quite so gullible or drowning in Trump Derangement Syndrome, however.

It’s truly sad that you believe the other half of the country is your enemy. You have been deceived.

Do you realize how moonbatty you sound?

Yep, that sounds about right for the Dim outrage machine

Heh, I debated scare quotes and decided they weren’t needed because it’s all so ridiculous (and typical).

How to respond to an ignorant brat:

If the persist, read the directions:

Whether or not Mueller gets fired, it sounds like Walter Shaub should be. His unethical fear mongering is enough grounds for it.

Um, fired from what? He works for a private organization which obviously shares his views, so why would they fire him?

The private organization should fire him.

He works for the Campaign Legal Center (CLC), as Senior Director, Ethics. (How that for irony?) —

Everything stated there is the code that hides a hard-left progressive organization. Go to any of their websites and you’ll see the same lofty language. It’s not what they post on their websites that matter, it’s what they do behind the scenes…

They’re ‘hard left,’ and they have no idea why.

Consider the idea that Trump expands the probe to cover the FBI (Strzok, et al) for which Mueller is obviously conflicted.

Haha, the President could fire Mueller before that date, and catch The Resistance flatfooted before it’s had time to stock up on Granola Bars and Evian Water.

But he won’t fire anybody; Team Mueller is too useful imploding all on its own.

Sooner or later the far Left will learn a really hard,sobering truth: They are a small minority, and most of them are personally yellow and don’t know one end of the gun from the other.
Bring it,turds.

notamemberofanyorganizedpolicital in reply to frankiefrank. | December 16, 2017 at 5:44 pm

“Sooner or later the far Left will learn a really hard,sobering truth: They are a small minority…”

Our biggest challenge is not in the left knowing this (they already do), but in getting enough people on our side to understand this.

First part of the solution is boycotts of the advertisers of msnbc, cnn, nbc, abc, etc.

Second part of the solution is to take back our schools.

Third part of the solution is to replace the leadership of PBS, NPR.

Fourth part of the solution is to replace or Swamp Sessions with Rudy Guiliani.

Fine, you wrote: “Third part of the solution is to replace the leadership of PBS, NPR.”

Here’s an idea, defund and cut them loose. They can survive on donations, go commercial (I’d rather watch some guy try to drive his Ford Explorer up Mount Everest than listen to a long list of donors being thanked), and stop using our tax dollars to spread leftist BS. Or rightest BS. The government should not be involved in the free press beyond Armed Forces Radio, NASA’s live links, and etc.

If you remember, that waste of life john bohener had a chance to do just that. Of course, he sold us out.

Isn’t the world going to end because of the end of net neutrality first?

Well yeah! Look at the absolute disaster the internet was in all those decades before Obama saved it! We can’t go back to that! It’ll be the end of the world, or something.

Remember, that treasonous weirdo weasel obama gave away US control of the Internet to the fascists of the world:

Disn’t Nancy say it was the tax cuts

And Instapundit weighs in: https://pjmedia.com/instapundit/283545/

Get out the popcorn – this is gonna be fun!

Heh, Insty snarks about Rob Reiner taking to the streets. I don’t think anyone should get their hopes up about seeing Shaub and his “take the streets gear” out on the streets, either.

Now I remember Shaub – this is the guy who a year ago was shrieking that Trump should be impeached the day he took office because his ownership of hotels was “violating” the emoluments clause – even though nobody else in the real legal world defines “emoluments” the way Shaub tried to do.

Yeah, Jackie Speier will be roughing it at the Crystal Springs Shopping Center #resist protest while drinking chablis out of a recycled paper cup and eating cold, imported prosciutto on marbled rye bread – from a retro Sharper Image cardtable buffet (while the fog rolls in)

Mueller is the best thing that has happened to Trump. He has eaten the poisoned fruit. He will not even be able to prosecute Manafort.

notamemberofanyorganizedpolicital in reply to Petrushka. | December 16, 2017 at 5:42 pm

Do you know how much the Lie-Stream Media the Uni-Party Enablers would be screeching and about what if Trump had come in and changed everything overnight?

This way, it all becomes oh so clear what EVIL has Occupied DC and the Uni-Party – pop culture as well.

Reminds me of a cut on the Radio Dinner album with a Joan Baez cover.

This is the same man who was supposed to be the ethics watchdog for the administration. Instead of advising on issues that came up, he went public and tried to shame the Trump administration. This is the same thing Comey did. Instead of telling Trump what was acceptable under the law, Comey wrote in his diary how Trump might have broken the law. This is the same resistance scum that is in every office building in DC and we have to have an accounting of their positions. Our government cannot function with anti-administration hijackers in every office. If this toad wants to “Take it to the streets” then by God lets go!

Mueller and his team look increasingly crooked, and this is an implicit threat that Trump shouldn’t do anything about it. This is a standard tactic of Dems, and it only works on cowards.

Trump should fire him immediately just for that.

But a wiser course would probably be to discredit and prosecute him first, then fire him.

Re the hillary klinton quote above:

Yes, manipulating the average democrat voter is the easy part. What klinton left out was: “I don’t know how to do the hard part.”

Mueller would probably welcome being fired before New Year’s Day. Look, we now have the Clinton laundry basket [Clinton Foundation, Servergate, Uranium One, etc] being dragged out and possibly opened up. Mueller’s dirty laundry is in the same basket, right along with the Clintons’. So, he is between a rock and a hard place, at the moment.

The powers behind the Mueller Investigation [the Establishment] wants it to continue for two reasons. The first is because it gives the Dems a way, though a very weak one, to discredit the Trump Administration. And the second is to allow Mueller to continue to amass material which can be used to bring pressure to bear to forestall investigations into Obama Era wrongdoing by administration officials. So, the lemmings are being pointed toward the cliff and told to follow a low intelligence Quisling over the edge. This will distract the rest of the public from the revelations being produced, which are destroying the Mueller investigation and the Collusion meme.

Is that an old Chubby Checker song: “Let’s Resist Again”?