And don’t accidentally shoot any invisible swordsmen either 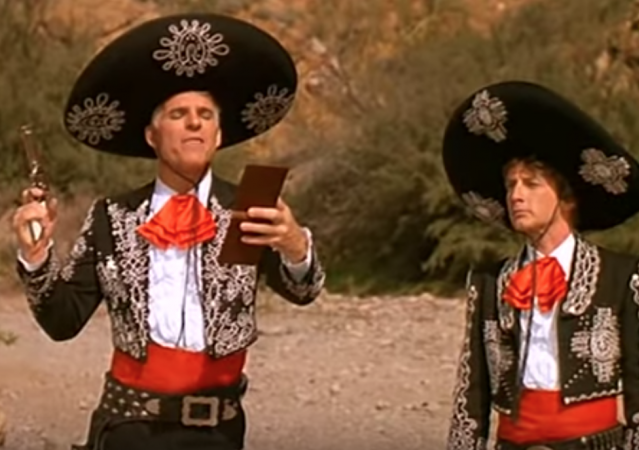 I fully recognize that every year, someone dies a senseless death from a bullet falling back to the ground.

That said, every time I hear a warning about firing guns into the air, I think first of ¡Three Amigos! and Chevy Chase’s character, Dusty Bottoms, accidentally shooting the Invisible Swordsman in an attempt to fire into the air.

But anyway, the Associated Press has the unfortunately necessary annual warning:

Police around the country have urged residents against the dangerous practice of shooting off guns to celebrate the New Year and warned of criminal charges against those who do.

…The issue especially resonates in Kansas City, where an 11-year-old girl died after being struck by a stray bullet on July 4, 2011.

“We’re trying to educate our children for a safer world, and as adults we’re cranking rounds up in the air — unacceptable,” Ramirez said at a Thursday news conference .

The girl killed in Kansas City is far from the only victim of such celebrations. In 2015, a man watching New Year’s fireworks from his driveway in southeastern Houston was killed by a stray bullet from celebratory gunfire nearby. Later that year, a 16-year-old girl was struck and killed by a stray bullet as she sat on a couch inside her home in College Park, southwest of Atlanta, on July 4.

In all seriousness, hold your fire until you get to the range or ranch. Practice gun safety. Be smart. It could save a life. And have a Happy New Year!

Stray bullets certainly are irresponsible. That is why I use buckshot every New Year’s!

They come down too…

That’s why Prometheus gave humans the gift of bird shot.

So are these messages being aimed at and publicized in the communities where celebratory gunfire is practiced, or are the proper authorities afraid of being accused of profiling?

This is a public service message that should probably be broadcast in Español.

The one guy I know who actually did that is white. He was a deputy sheriff, no less. When I explained the physics and math governing the force of a bullet fired into the air (something I learned in high school) to the person who told me about it, that idiot told me I was wrong.

That was another white man, college grad.

So yes, the warnings are necessary, and they should be in the pertinent local languages, including english.

It’s like telling people not to set off fireworks in grassland during a drought, or not to dive into shallow water head-first.

You use the term “college grad” as if it implies actual intelligence.

I just recently saw an episode of Mythbusters where they did a decent job of trying to quantify this, as to energy and penetration at the end of the downward leg…. Not precise, but sufficient to establish the hazards involved.

Wouldn’t shooting into the air be an improvement in Chicago at Baltimore?

Probably not, they’ve tried just about everything else and nothing has worked. Some things just should not exist and Baltimore is one of them.

Firearm safety is serious business, but comrade, a more egregious infraction is hurt feelings due to blatant cultural appropriation that’s played for laughs because white privilege.

You are condemned to re-eductation camp for sensitivity training.

actually – at midnight on New Years Eve, if you go near the northeast quadrant of my town (just about all Mexican now) you will hear sounds that make the “shock and awe” start to the gulf war sound like popguns. You will swear that WW3 has broken out, and based on what I hear, i would hazard a guess that my little town in Texas can outgun many 3rd world countries. It’s easy to count the 7 shot clips and the 9 shot clips, but what really scares me is when I hear a series and say “oh hell that was a full auto!”

And then there’s always somebody up there who’s got what has to be a .50 caliber. I mean, day-am!!!

Clearly this discriminates against Muslims.
https://www.youtube.com/watch?v=GkxVL7lB9bQ

Thank gawd wgat u would do wuffiyt der perfessub=als. Why I might misgender.