Pennsylvania: Family Ordered To Remove “Jesus” Sign From Their Property

Pennsylvania: Family Ordered To Remove “Jesus” Sign From Their Property 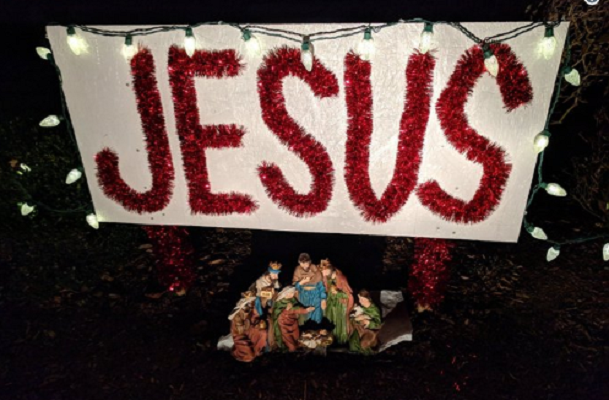 The PC, perpetually-offended crowd has struck again. This time in Pennsylvania where a homeowners’ association ordered a family to remove a “Jesus” sign from their own property because someone claimed to be “offended” by its presence.

A Pennsylvania family was ordered by their homeowner’s association to take down their Jesus Christmas display after one of the neighbors reported it as offensive.

“As part of our Christmas decoration, we would display the name Jesus to point out to everyone that we in this family believe that the reason for the season is to celebrate the birth of Jesus,” said Mark Wivell told FOX43.

But the homeowner’s association wasn’t having it.

On Sunday, the association told the family to take down the sign after a neighbor complained it was offensive. The homeowner’s association also claimed the display was a sign, not a decoration – which is a violation of the rules, USA Today reported.

“After taking a look at it, it isn’t in accordance with normal Christmas decorations,” Bud Vance, the Courtyards president, wrote in a statement to the Gettysburg Times.

The Wivells insist they are following the rules.

. . . .  The family said they have no plans to take down the sign until January 15, when the association requires all displays to be taken down. Family members said they are unsure which neighbor was offended.

“People get offended by different things, but just because something offends you, doesn’t mean the whole world has to change to accommodate you, so I would say please be more tolerant,” Mark Wivell said.

Offensive? A couple was told by a Links at Gettysburg HOA that they had to take their sign down after a complaint. Thoughts? @CBS21NEWS pic.twitter.com/jOg6njpKd2

#pencilsmatter…. Why is it all about PENnS-ylvania… Im offended! Take the name down at every entry to the commonwealth….

one of the keys to living a happy live is to NEVER live anywhere that has an HOA.

You are absolutely right about HOA’s.

My neighborhood has an HOA. It has no officers, no meetings, no dues and provides absolutely nothing to the neighborhood. The only reason we have one on paper is to stop anyone from moving in and starting one up.

I don’t know how many crèches I’ve seen … including the ones I set up myself … but it’s a lot. Some have been pretty big, bright, and borderline gaudy, but they were still obviously nativity scenes.

But I’ve never before seen one that someone tried so hard to make look like a self-service gas station. Were I a more religious type, I think I’d consider that a stray into the category of blasphemy. Pray Here and Get Gas! No, thank you.

The FOX News photo makes the sign look much bigger and more gas-station-like than it is. Look here for a better perspective:
https://www.usatoday.com/story/news/nation-now/2017/12/22/hoa-asks-pennsylvania-family-remove-jesus-christmas-display/977627001/

Typical news hype for ratings/clicks. Thanks for the true story picture!

The picture might not show the full story. It seems a little gaudy for a residential area but your religious rights supersede HOA rules. Neighbors who are offended need to look the other way for a couple of weeks.

Just tell the HOA that Jesus is their undocumented immigrant gardener and ask why they’re being racist.