Next Week in Jerusalem?

Next Week in Jerusalem?

Reports that Trump will recognize Jerusalem as Israel’s capital, but delay moving the Embassy from Tel Aviv.

During the campaign and transition, Donald Trump was clear in his promise to move the U.S. Embassy to Jerusalem, Israel’s capital.

As with prior administrations, there was walk-back in reality, and the Embassy still is in Tel Aviv.

In the past week there has been much speculation that an announcement about moving the Embassy was near, but that speculation was denied by the administration.

Today, there is widespread reporting that next Wednesday Trump will announce — well, it’s not really clear what. It could be a move of the Embassy, or it could be a recognition of Jerusalem as Israel’s capital without moving the Embassy. 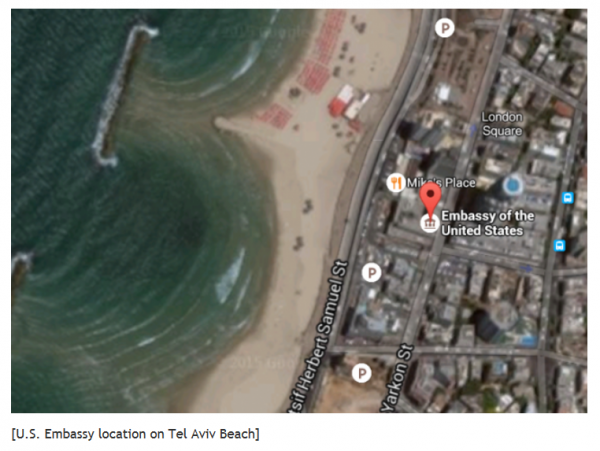 U.S. President Donald Trump is likely to deliver a speech on Wednesday recognizing Jerusalem as Israel’s capital, a senior U.S. official said on Friday, a move that could upend decades of American policy and further inflame tensions in the Middle East.

Two administration officials said on Thursday that even as Trump was considering the controversial declaration, he was expected to again delay his campaign promise to move the U.S. embassy there from Tel Aviv….

A U.S. stance deviating from that of previous presidents, who have insisted that the matter must be decided in peace negotiations, would anger Palestinians, who want the city’s eastern sector as the capital of their future state, and the broader Arab world.

If that report is true, it represents half a loaf. Particularly if the boundaries of “Jerusalem” are left uncertain and Jerusalem is not recognized as the undivided capital of Israel. It would be mostly an empty word statement, but one which doubtlessly will be met with fury from the Palestinians.

The announcement, whatever it is, is expected next Wednesday, Politico reports:

President Donald Trump and his senior aides are preparing for a Wednesday announcement that the United States recognizes Jerusalem as the capital of Israel, according to a senior administration official.

The official said the specifics of the announcement are still in flux, adding that the White House is considering having Trump unveil the plan during a speech at the National Defense University in Washington.

The move, coupled with plans under consideration to eventually move the U.S. Embassy in Israel from Tel Aviv to Jerusalem, could complicate efforts by Trump’s son-in-law and adviser Jared Kushner to restart peace talks between the Israelis and the Palestinians.

Aides have said plans are still in flux and may change. The president had faced a Friday deadline under a 1995 law to issue a waiver allowing the embassy to remain in Tel Aviv, something presidents have routinely done since 1999.

Last week I was invited by an editor of The Washington Post’s Monkey Cage blog to contribute an article focusing on the issues surrounding president-elect Donald Trump’s pledge to move the U.S. embassy from Tel Aviv to Jerusalem.

The article, “Trump’s plan to move the U.S. Embassy to Jerusalem could help the peace process”, was published yesterday….

In it I argue that come this spring, President Trump shouldn’t sign the waiver provision of the 1995 Jerusalem Embassy Act and should instead move to implement the law because it would “bode well for Israeli-Palestinian peace prospects.”

As I highlighted in several prior LI posts (see here and here), both presidents Bill Clinton and George W. Bush made campaign promises to move the embassy, only to renege once they were in office.

But in the op-ed I note that Congress never intended for the waiver to be a “crutch for procrastination”. Further, the reasons that critics of the relocation give for delaying the move yet again—that it’ll unleash a wave of extremism; spark another Palestinian uprising; or drive a wedge between the United States and Arab states or Europe—simply don’t hold up….

The goal of the Monkey Cage blog is to show how political science research can be used in public policy debates and how insights from this scholarship can help us to make sense of controversial topics. So in my op-ed I chose to apply conflict resolution theory to the issue of the U.S. embassy move, and showed how this approach lends support to Trump’s relocation plan:

a careful look at conflict resolution theory suggests that moving the embassy could be a constructive move, pushing Israelis and Palestinians back to negotiations.”

Will “it” happen next week? It depends on what the meaning of “it” is.

How to you eat an elephant?

4th armored div in reply to notamemberofanyorganizedpolicital. | December 1, 2017 at 3:12 pm

bon appetit; enjoy your meal; dig in.
——————–
we can only hope, with everything on POTUS plate.

I’m remembering all the fake outrage on Facebook claiming that Trump was anti-Semitic because he accepted a prayer shawl from a black Minister who had incorporated some Jewish traditions into his hybrid religion.

I remember that there was a bunch of fake outrage over how Trump “inspired” all of those bomb threats against Jewish targets here in the US. And then it turned out they were all being made by some mentally ill teenager in Israel.

How about we move Israel to Utah?
Problem solved.

Um, what? Even if it were possible, why would you want to, and what problem would it solve? Jews are from Judæa, not from the American west. Arabs are from Arabia, let them return there.

a recognition of Jerusalem as Israel’s capital

What does that even mean? There is no such thing as “recognition” of which is a country’s capital city; it’s not a political designation but an objective fact, like which is its tallest mountain, or what are its principal exports. The capital is where the government is, and Israel’s government has always been in Jerusalem. 70 years’ worth of US ambassadors, whenever they wanted to meet a government official, have had to make the trip to Jerusalem, which made no sense at all, especially in the days before modern communications.

Now if Trump will recognize Jerusalem as part of Israel, and order the State Department to issue US citizens born there with passports acknowledging their correct country of birth, that would be at least something. But merely no longer pretending the capital isn’t where it is will not be anything to celebrate.