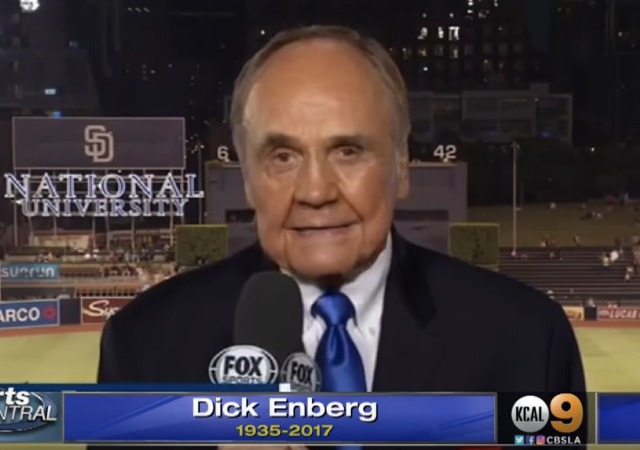 Who did not love Dick Enberg? No one because it was impossible. Unfortunately, we lost the treasured broadcaster on Thursday night. He was 82 years old. From ESPN:

Enberg’s daughter Nicole said the family became concerned when he didn’t arrive on his flight to Boston on Thursday and that he was found dead at his home in La Jolla, a San Diego neighborhood, with his bags packed for a trip to see his third grandchild for the first time. The family said it was awaiting official word on the cause of death but believed he had a heart attack.

The family “is grateful for the kind thoughts and prayers of all of Dick’s countless fans and dear friends,” according to a statement released by Enberg’s attorney, Dennis Coleman. “At this time we are all still processing the significant loss, and we ask for prayers and respectful privacy in the immediate aftermath of such untimely news.”

Enberg was one of America’s most beloved sports broadcasters, with his versatile voice spanning the world on networks such as NBC, CBS and ESPN. In all, he covered 28 Wimbledons, 10 Super Bowls and eight NCAA men’s basketball title games, including the Magic Johnson-Larry Bird showdown in 1979.

His work was celebrated with a host of honors, including the National Baseball Hall of Fame’s Ford C. Frick Award (2015), the Pro Football Hall of Fame’s Rozelle Award (1999) and the Naismith Memorial Basketball Hall of Fame’s Gowdy Award (1995). He won 13 Sports Emmy Awards and a Lifetime Achievement Emmy. He received a star on the Hollywood Walk of Fame, and UCLA named its media center in Pauley Pavilion after Enberg this year.

Most recently, Enberg had served as the primary play-by-play television voice of the San Diego Padres, retiring in 2016 after seven seasons with the team.

We will miss his trademark “Oh, my!” calls. Thoughts and prayers to his family and friends in this difficult time.