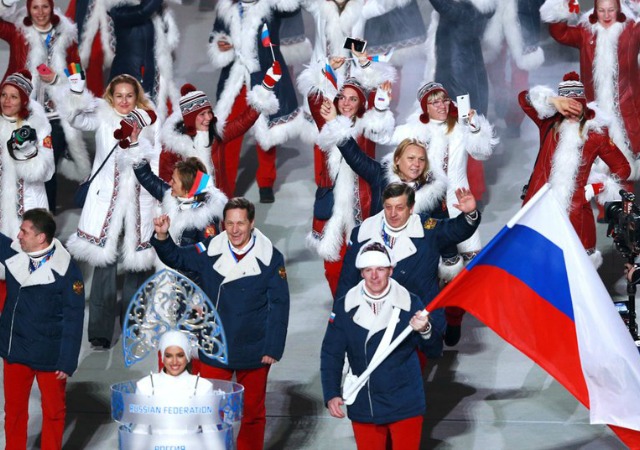 Russia has been banned from the 2018 Winter Olympics take place in Pyeongchang, South Korea scheduled to begin in February. Russia prides itself on its athletics, but a long investigation revealed state-backed doping of numerous athletes during at the 2014 Winter Olympics in Sochi Russia.

The New York Times explained what this means:

The country’s government officials are forbidden to attend, its flag will not be displayed at the opening ceremony and its anthem will not sound. Any athletes from Russia who receive special dispensation to compete will do so as individuals wearing a neutral uniform, and the official record books will forever show that Russia won zero medals.

Those Russian athletes “with histories of rigorous drug testing may petition for permission to compete in neutral uniforms.” The Guardian wrote that the IOC also said the athletes must prove they did not participate in the state-sponsored doping program.

How will Russia respond? Oh, you know, probably mature and adult like. Actually, probably the opposite considering how much Russian President Vladimir Putin loves the limelight. His spokesman Dmitri Peskov stated that the government had no discussions of a boycott. It’s nighttime in Russia right now so I bet we won’t receive a reaction until the morning.

If Putin decides to boycott the Games, then those athletes who are clean and want to attend will not go.

Remember, this wasn’t just a few doped up athletes here and there. The entire doping operation blew away IOC President Thomas Bach:

Thomas Bach, president of I.O.C., has said he was perturbed not only by Russia’s widespread cheating but by how it had been accomplished: by corrupting the Olympic laboratory that handled drug testing at the Games, and on orders from Russia’s own Olympic officials.

In an elaborate overnight operation at the 2014 Sochi Games, a team assembled by Russia’s sports ministry tampered with more than 100 urine samples to conceal evidence of top athletes’ steroid use throughout the course of competition. More than two dozen Russian athletes have been disqualified from the Sochi standings as a result, and Olympic officials are still sorting through the tainted results and rescinding medals.

The lid came off the scheme after two whistleblowers came forward:

Tuesday’s penalty was in line with what had been advocated by two key whistle-blowers whose accounts upended Russia’s standing in global sports over the last several years: Grigory Rodchenkov, the chemist who spent 10 years as Russia’s antidoping lab chief and was key to carrying out the cheating schemes in Sochi; and Vitaly Stepanov, a former employee of Russia’s antidoping agency who married a runner for Russia’s national team and was the first to speak publicly about the nation’s institutionalized cheating.

“The world knows that hundreds of Olympic dreams have been stolen by the doping system in the country where I was born,” Mr. Stepanov wrote in an affidavit submitted to the International Olympic Committee this fall. He had suggested banning Russia’s Olympic Committee for two years, or until the nation’s antidoping operations are recertified by regulators. Russia and its individual athletes are all but certain to miss the 2018 Paralympics given regulators’ refusal to recertify the nation last month.

This is the type of thing Democrats would do and believe they are above the law.

It seems that it should be sufficient to acknowledge the violation, and demonstrate the methods and practices implemented to mitigate its recurrence.

Does than include explaining Big Nancy? Sorry, she is a communist, but not Russian.

I’m pretty sure Meuller is looking into Trump’s culpability with this matter as part of his “Russian! Trump! Russia! Trump!” investigation /sarc off.

How I long for the innocence of my childhood. No, it wasn’t perfect (none are), but it was compared to this day and age of good being called evil and evil being called good.

Icarus: A Doping House of Cards Tumbles Down

In the new Netflix documentary, a filmmaker accidentally captures how one of the biggest scandals in sporting history came to light.

“Any athletes from Russia who receive special dispensation to compete will do so as individuals wearing a neutral uniform, and the official record books will forever show that Russia won zero medals.

Those Russian athletes “with histories of rigorous drug testing may petition for permission to compete in neutral uniforms.” The Guardian wrote that the IOC also said the athletes must prove they did not participate in the state-sponsored doping program.”

That seems like a good ruling. Athletes put everything they have and then some into training for competition at the Olympic level. It is great that the untainted athletes have a chance at competing.

It is my understanding that it came to light due to two whistleblowers. I believe at least one of them was in the lab itself.

Sorry, I meant to say that I read this in another article published on the matter in the EU press–not just recapping what LI reported.

“….In other news, in addition to trying to bolster the fake Trump-Russia narrative, the Olympic Committee has also decided to preemptively award the long jump gold medal to Caitlyn Jenner. They were going to award Jenner the biathalon medal (an event which sounds more appropriate) but they don’t want to do anything they think might promote guns or gun ownership…”