HuffPo Contributor Apologizes to Sen. Scott for His Prop Tweet

HuffPo Contributor Apologizes to Sen. Scott for His Prop Tweet

“Uh probably because I helped write the bill for the past year…..” 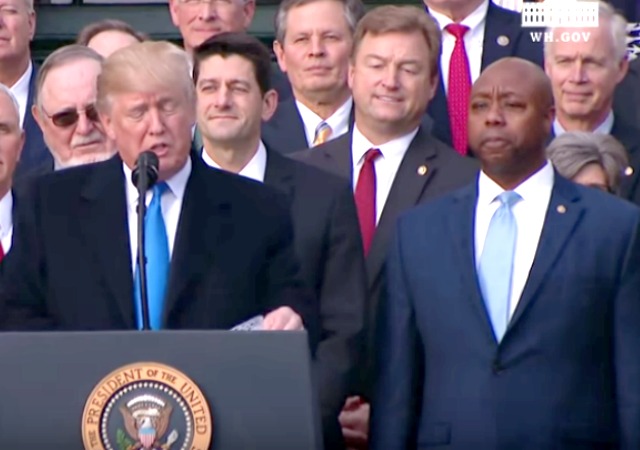 On Wednesday afternoon, President Donald Trump held a news conference on the White House lawn to celebrate the tax bill’s passage through Congress. A group of GOP lawmakers joined him, including Sen. Tim Scott (R-SC).

Scott had a place right next to the president, which led HuffPo contributor Andy Ostroy to call him a prop used by Trump. Scott replied back that he helped write the bill and gather support for the bill. In other words, Scott’s hard work is one reason why it passed. 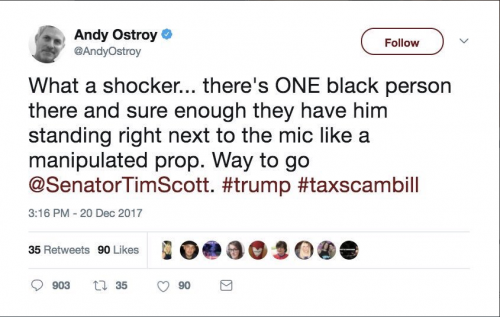 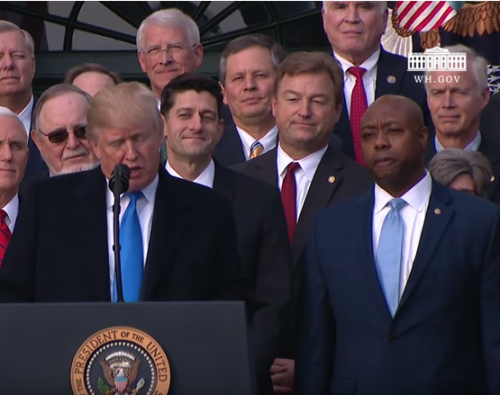 Uh probably because I helped write the bill for the past year, have multiple provisions included, got multiple Senators on board over the last week and have worked on tax reform my entire time in Congress. But if you’d rather just see my skin color, pls feel free. https://t.co/KLLNXqIZ3i

BOOM! Of course people quickly quickly came to Scott’s side to defend the senator.

.@SenatorTimScott, earlier I tweeted something that I now agree was unfair. Senator, I regret that tweet & apologize for it. There were many other ways I should’ve and could’ve made my point.

Interesting though because how else could you get your point across? It doesn’t take a genius to figure out that Ostroy only concentrated on Scott’s skin color. NRO’s Charles Cooke asked Ostroy to make his point a better way than the deleted tweet.

Ostroy still hasn’t made his point in another tweet.

It looks bad from a diversitist’s perspective.

However, from a normal perspective, these are people, men and women, contributors and supporters, where the former have the pole, not prop, position.

Someone tell the Puffing Ho, that is Termination-level evil from their employee.

If they’re all that darn smart, he can go work for
Nancy Pantsuit, or Chuckie Bride of Hillary Schumer……

Is Huff Po Racist too?

Tom Servo in reply to notamemberofanyorganizedpolicital. | December 21, 2017 at 4:04 pm

Actually and literally, Yes. The left is now composed of the most hard core racists in this country; they view EVERYTHING through the lens of Race, and they judge everyone’s worth on the color of their skin alone. That is as racist as you can get.

Actually Tom, you’re judged by which leftist you support. Skin color is only one component, if you were black and conservative you’ll get called racist names without shame by the left.
I think it’s institutional racism of the left, which is why they wanted affirmative action. They don’t believe black people can do anything on their own without the help of a liberal.

Oh, now I see the problem. There are two people who are blocked from the camera’s perspective, and three… no, four cutouts. Yeah, they could have coordinated better. In our family photos, I am either standing behind the group, or kneeling in front, and everyone is in frame.

He should really be apologizing to Trump and every Republican.

The main smear was that Republicans are all racists; the lesser smear was against Sen. Scott for being an “Uncle Tom”.

This apology is incomplete and reeks of insincerity. Imagine that.

Apologies are b.s. when they’re demanded, instead of coming on their own.

In other words, leftist slanders are realize they are dealing with spineless GOPe rats, who will let them off the hook with insincere words.

Ostroy is the harvey weinstein of fake news.

Quite correct. This was a dig at Trump, not a smear of Sen. Scott. He can’t “restate” his comment because Scott defused it by pointing out that in making the comment he’s the one who used a person of color as a “prop.” Not to mind, though. The next time Ostroy perceives an opportunity to frame Republicans (in general) or Trump (in particular) as “racist,” I’m sure he’ll sink to the occasion.

Delete, good. Apology, good. But the very fact this racist contempt was Ostroy’s go-to play for this event speaks volumes about the rot in his soul.

It also, once again, confirms Fenn’s Law: The left doesn’t truly believe in the things they lecture about to the rest of us.

Agreed. In the spirit of the Christmas season, I will say that this is a right proper apology. None of that “I apologize if you were offended” horse pucky. He knows what he did was wrong and he said as much. So… good for him. Hopefully he’ll take this as a teachable moment and behave better in the future.

No, it’s not a proper apology. He only apologized to Scott, not all the Republicans that he smeared with the same old tired “RAYCISS” bullshit they always spew.

That’s not an apology, that’s pure weaseling—a pretense that his offense was some other, lesser offense.

The problem isn’t that his tweet was “unfair”. The problem is that it was deliberately and blatantly racist. The fundamental assumption is that the only proper course for a black man is to oppose whatever-the-hell it is the Republicans think they’re accomplishing with this bill. That is a race-based prejudice … in short, racism.

You can practically hear this guy thinking … So who does this dumb n….r think he is, anyway? Get back in your place, boy. We’ll tell you what that place is. Typical Leftoid, and characteristically disgusting. The liberal mind-rot couldn’t be clearer.

The attempt to pretend that this tweet was something else is an excuse, not an apology.

The left’s beliefs in anything have nothing to do with anything.

Their goal is fascism. Period. They are pure corruption.

Wanna be ruled by corrupt fascists?

Good example of white privilege on Ostroy’s part. No white person needs to expect that the color of his skin dictates his politics. He should check his privilege next time.

Snark is one thing, but “racially snark” is unforgivable.

“There were many other ways I should’ve and could’ve made my point.”

And what point would that be? That Scott’s work on this for over a year is BS?

The point to this idiot is that even a black guy can be part of the major tax law legislation and I bet they did not give a hoot about what color his skin was but if he could get the job done and he did.

It seems the only people who really care about skin color are the ones screaming about it.

Agreed, and I was going to ask this same question. Has anyone leaned on Ostroy to find out what the point was?

Yeah, Ostroy could have called Senator Scott a ‘dumb n-word,’ and expressed his true feelings about Sen. Scott.

Ostroy’s comment was that Republicans are racists – “See, they’re using a black man as a prop.” But in order to do that, he had to presume himself that the black man was, indeed, a prop, exposing the racist root of his comment. So his ability to use the photo as a jumping-off point for “Republicans are racist” is shot. He’ll have to wait for another opportunity to make his comment in one of those “many others ways,” confident, as he is, that Republicans will provide the setting. That may happen the next time Trump or Ryan breathe.

I see a pattern …

The left has even corrupted the Holocaust Museum.

The words ‘obama,’ ‘clinton,’ ‘pelosi,’ and ‘schumber’ will one day enter the vernacular as synonyms for ‘disgusting.’

Then again, right now, we have the term “schumer-bomber:”

Ostroy’s point is the picture does not comply with the requirements of the Cultural Revolution and the narrative that everyone who he disagrees with is racist. He forgot to point out it was also lacking an Asian, the obligatory female majority body count for every photo op and some tranny’s.

There I said it…Sucks to view the world through his lens.

notamemberofanyorganizedpolicital in reply to Andy. | December 21, 2017 at 2:15 pm

But Ostroy doesn’t comply with it either.

Neither does Huffing Po I bet!

Like most liberals all they see is skin color. A barb like Andy threw will not be forgotten nor should it be. It is the tip of the spear of liberal orthodoxy.

Seeing the (deserved) brutal internet flogging that Mr. Ostroy received, I don’t feel it proper to jump on top of the pile. Still, I’m willing to give him a little slack to see if his behavior changes.

Nope, not even a twitch.

That change will occur: a month from never.

Neither apologizing fake news propagandists and opportunistic rino hacks can’t be trusted. Ever.

Yes, but I like to give them the benefit of the doubt (although that does not include letting them watch my children or borrow money).

That’s something that Trump does so well. The bigoted leftists, under normal circumstances, will keep a lid over their bile and quietly feed lies to the public in increasing amounts if not stopped (See George W, press response thereof)

Trump makes these leftist loons so infuriated that they blast out their hate all over while hopping up and down with rage and screaming profanity. Makes it harder for them to hide their true selves. Good.

Yes, Andy Ostroy is a rascist. Huffpo, as a “progressive” journal, should publicly chastise Ostroy and refuse to accept further articles from him.

Racist Liberal automatically assumes the black man is a token. Doesn’t even check to see if the black man did something noteworthy to earn that position. Because that’s how black people are viewed in his liberal bubble.

Bigotry of low expectations. Someone should grill him – do you think blacks are capable of any achievement? Do you believe they are inferior and only have value as either victims or props? When a black person receives an award do you believe it’s because they earned it or because of affirmative action and quotas? And lastly, what do you plan to do in your upcoming retirement?

What a racist douche. Fire him.

It never ends.
>
When a liberal makes a horribly blatant, racist remark, then they say “Oops. sorry about that.” and it is forgotten never to see the light of day ever again.
>
Should a Republican, or worse yet a Trump supporter, get the weather forecast wrong, then the screams of racism occupy the front pages on newspapers across the country for months and the poor Trump supporting weatherman is forever labeled a racist.
>
If it were not for a double standard, then they would have no standards at all.

Not sorry at all, is he.

“many other ways I could have made my point”

Still believes the Senator is just a Token black man for Trump, but can’t seem to find the words to say it that will not reveal what a complete scumbag RACIST he is.

He’s only sorry he got called out on it. Sorry he had to delete his Twitter account, and really really sorry that he now has to pretend to apologize to salvage his career.

For the slander though, no. He still firmly supports that.

My exact thought…I can’t believe his delusional non-apology that he still had some point to make that wasn’t completely eviscerated by the good Senator from SC. When you carry a card for a long time, you don’t know how to drop it and fold and save yourself further embarrassment.

Eff this guy…even the Huffpo should drop his ass.