Guatemala to move Embassy to Jerusalem

Guatemala to move Embassy to Jerusalem

Follows U.S. announcement, as Palestinians lash out at Trump and U.S.

The government of Guatemala is going to follow the U.S. lead, and move its Embassy to Jerusalem, in recognition that Jerusalem is the capital of Israel.

Guatemalan President Jimmy Morales announced in a Facebook post Sunday night his country will be transferring its embassy from Tel Aviv to Jerusalem, following a conversation he had had with Prime Minister Benjamin Netanyahu and in the wake of President Donald Trump’s recognition of the city as Israel’s capital.

“Dear citizens of Guatemala, I have spoken with Israeli Prime Minister Benjamin Netanyahu today. We spoke about the excellent relations our countries have enjoyed since we supported Israel’s creation. One of the important topics broached were transferring the Guatemalan Embassy to Jerusalem, and I hereby announce I have instructed the embassy’s staff to plan such a move. May God bless you,” Morales told his followers….

Jerusalem sources professed their belief more countries will follow Trump’s lead and announce moving their embassies to Jerusalem. Netanyahu echoed the same sentiment in a CNN interview he gave to reporter Oren Liebermann Friday, in which he said Israel was in talks with several countries on the matter but refused to name them until the transfer was underway. 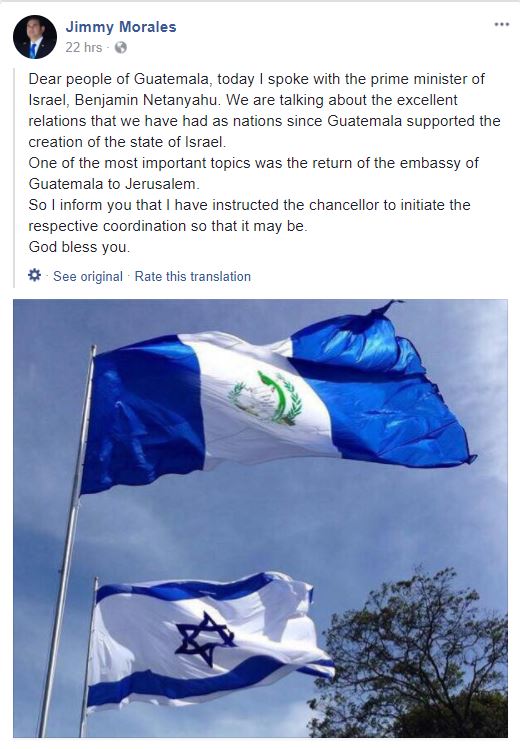 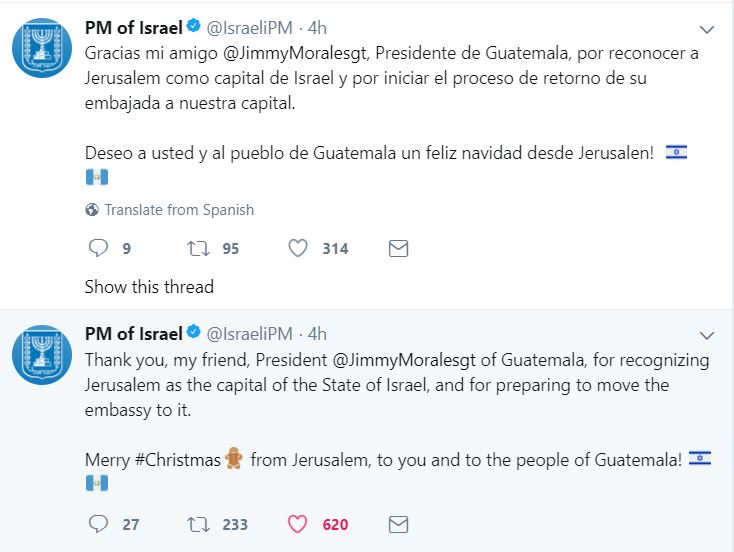 This is a big blow to the Palestinian push back against Trump. And it could mean that several more embassies will move. So far though, the Palestinian Authority response has been somewhat muted:

“This is a disappointing decision that we must fight by the way of political and diplomatic measures,” Majdi al-Khalidi, Palestinian Authority President Mahmoud Abbas’s diplomatic affairs adviser, told The Jerusalem Post.

Khalidi did not specifically state which measures should be taken to push back against the Guatemalan president’s announcement.

By contrast, the Palestinian Authority has vented fury upon Trump:

Palestinian Authority President Mahmoud Abbas dismissed on Friday a year’s worth of work from the White House peace team on proposals for the Israeli-Palestinian conflict, accusing US President Donald Trump of disqualifying himself from any future diplomatic process by recognizing Jerusalem as Israel’s capital….

But three weeks on from Trump’s dramatic proclamation, Abbas has shown no sign of cooling off – instead specifying his concerns with America’s position and personalizing them to the president.

Speaking alongside French President Emmanuel Macron in Paris this week, Abbas said again he would seek to internationalize the conflict by turning to parties that had previously played side roles in direct talks in the past: France, the European Union , Russia and the United Nations.

“The US can no longer be considered an honest broker,” Abbas said. “We will not accept any American plan. The US has disqualified itself as an honest broker by making a decision which contradicts international law.”

He and the rest of the PA refused to meet with Trump’s special representative for international negotiations, Jason Greenblatt, during his visit to the region last week. Greenblatt is leading the administration’s daily work on a peace plan it says will provide detailed US-led proposals to resolve dozens of sticking points in the conflict.

It Abbas thinks Russia (which by the way recognized “West” Jerusalem as Israel’s capital without any fury from the Palestinians), China or France can fill the role of the U.S., he is sorely mistaken.

i am NOT for a two state solution –
But the only w it may happen is hen the Fakestinians see
more embassies established in Yerushelayim.

Prophecy About the Nations of the World on Sukkot

Yes, it’s old fashioned of me to call the rulers of the West Bank the PLO. The leopard can change its name all it wants but it can’t change its spots.

“the Palestinian Authority has vented fury upon Trump…”

imagine how much fury they will have when Taylor Force act get signed.

With eac h of my children, the time would come when they pitched a fit and tol me they were mad. My response was that parenta might occasionally care if they were mad, but the rest of the world did not care.

Jews collectively are a staggering asset to humanity, most of the Middle East could evaporate, and virtually no one will care or notice.

Middle Eastern ingrates have a long histiry of being quarelsom, of negotiating in bad faith. I see no reason to believe that they will ever change, and that means that it is time to launch an all out war on them. It is time to make them really want peace.

My guess is that the Trump proposal in the next few months is going to offer the Squatters 75-80% of what they’ve been asking for, with swap-outs for the remaining 20% of items in terms of aid or cash flow, and then President Trump will DARE them to say no.

Promptly upon them ACTUALLY saying no (because the leadership of Hamas and the Palestinian Authority have painted themselves into a corner where they can’t say yes), I fully expect that President Trump will say “Well, we offered them the best deal that they’re ever going to get. A GREAT deal. They decided to say no, because they can’t get over fighting. We’re not going to enable their conflict any more. I am hereby invoking my powers as President to stop all aid to the Palestinian Authority until such time as it renounces Terror attacks, brings terrorists and mass-murders to justice, ceases all hostilities, and roots out Hamas as leadership of the Gaza Strip. They now control their own destiny. Let them eat the dirt that they stand upon.”

I expect shortly thereafter, Gaza and the West Bank will devolve into a very short, VERY intense civil war, and when the smoke clears, the “old guard” will be dead. Arafat had the loyalty of his subordinates. Abbas, not so much.

This is no surprise. Guatemala was one of the few countries to accept Jewish refugees from Germany in the 1930s!

Thank you, President Trump for this courageous action. It has been l-o-n-g overdue!