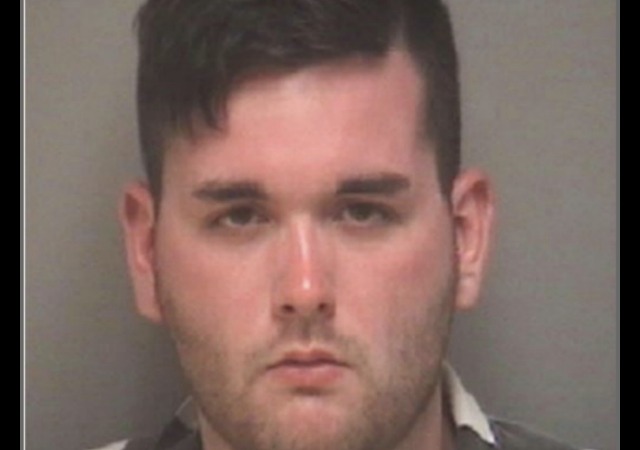 An Ohio man accused of driving into a crowd protesting a white nationalist rally in Charlottesville has been indicted on 10 felony counts, including first-degree murder.

Prosecutors say Fields drove into peaceful counterprotesters the day of the rally that drew hundreds of white nationalists to the Virginia college town. A woman was killed, and authorities say 35 people were injured.

Fields, described by a former teacher as fascinated with Nazism, was initially charged with second-degree murder. The charge was upgraded last week.

Also indicted Monday were three men charged in connection with an attack on a man in a parking garage the day of the rally, and a man charged with firing a gun.

His eyes are too close together.

Wait until discovery. You will hear the other side of the story.

The attack on the man in the parking garage…was that the white guy who was jumped by numerous black men simply for being white?

This guy who took a lesson from the Paleostinians needs to go to prison for a long, long time. I don’t care how strongly you feel about something, you don’t drive a car into a crowd of people.

Wait until you know the facts before you judge. I suggest you research youtube as to the events preceding the acceleration of the car.

If you are surrounded by a mob attacking your car with baseball bats, you most certainly DO drive them over. Reginald Denny and all that.

I’m not saying here that this happened in this case, but I would not be surprised.

A link here would be helpful. Thanks.

No charge of Terrorism for the white guy who used his vehicle in an act of political violence. No surprise.

It would seem you feel whites are somehow immune to the law. Therefore, I must assume you never got past the third grade.

No I don’t feel that whites are somehow immune to the law. I know that white criminals get lenient and preferential treatment on all levels of the American criminal justice system. The Bundy mistrial today along with many many many more examples is proof of this. I knew that white Judeo Christian James Alex Fields wouldn’t be changed with Terrorism. The same way I knew that the only reason white Sayjullo Saipov who did the same thing Fields did would be charged with Terrorism was due to him being a Muslim.