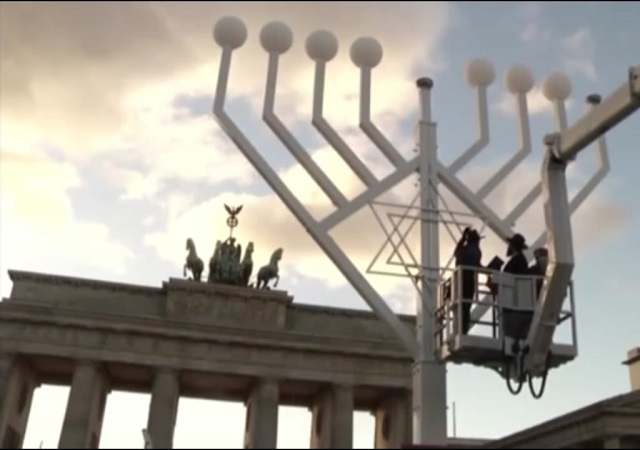 The city of Mülheim in northwestern Germany cancelled its official Hanukkah festivities, citing ‘security concerns,’ German newspaper Bild Zeitung reported. All the outdoor Hanukkah events due to take place in Mülheim and the adjoining region have also been cancelled, the head of the local Jewish community confirmed.

The German state of North-Rhine Westphalia, where Mülheim is located, has seen an upsurge of antisemitic attacks in the recent years. In the nearby city of Bochum, the Jewish community leaders have urged Jews to stop wearing kippah, the traditional Jewish skullcap that identifies them as Jews, in public. Last month, the local broadcaster Radio Bochum reported that Jews “routinely faced with insults on public streets when they are recognized as Jews.” The broadcaster identified the perpetrators as “Muslim youths.”

A study published by the Berlin branch of American Jewish Committee (AJC) today points to “widespread antisemitism among Arab refugees in Germany.”

“Until now, reports that many new arrivals in Germany espouse anti-Semitism have been largely anecdotal,” said AJC Berlin Director Deidre Berger. “But this new scientific analysis shows that the problem is widespread in the refugee communities from Syria and Iraq. Anti-Semitic attitudes, stereotypes, and conspiracy theories are common, as well as a categorical rejection by many of the State of Israel.”

It was meant to be the festival of joy — but Hanukkah has now been cancelled. The Jewish community and the city of Mülheim have cancelled the event planned at the symbolic Synagogenplatz.

The spokesperson for the city, Volker Wiebels did not speak of an imminent threat, but referred to the advice of the Central Council of Jews (the umbrella organisation of German Jewish community).

The city hall, exposed from many sides, could not serve as a protected site. “A secured indoor location could not be found at such short notice.

City’s Mayor, Ulrich Scholten, a 60-year-old Social Democrat said, “It is unbelievable that I have to witness a time — apart from the period between 1933 and 1945 — that a Jewish public gathering cannot take place due to security reasons.

Alexander Drehmann, head of the Jewish communities in Mülheim, Oberhausen and Duisburg, said,”Most of all we feel grief, because Hanukkah is a festival of joy. We have cancelled all outdoor events. We are going to our community hall with secured entrance checkpoint, instead of being at the municipal theater. There were warnings, even from the non-Jewish sources, which I cannot name. It is a bad feeling. Surely one of the lowest points in our post-war history.

Michael Rubinstein, head of the [North Rhine-Westphalia] state association of Jewish communities of Nordrhein region, told us in Düsseldorf, “I use to get blatant hate mails, just as I do today. The difference is: earlier one tried to stay anonymous. People now write their proper names without any inhibitions. Apparently they feel that they speak for the majority. This should makes us do some seriously thinking. [Translation by the author]

The announcement comes just days after the antisemitic weekend demonstrations that took place in Berlin and other German cities. In Berlin, more than three thousand Muslim men were heard chanting Arabic slogans, shouting  “death to the Jews” and “Jews, remember Khaybar, the army of Muhammad is coming again” — alluding to the annihilation of the Jewish population of Khaybar, an oasis in Saudi Arabia, at the hands of Muhammad and his conquering army.

“German city of Mülheim pulls the plug on its Hanukka festival below due to security concerns. My suggestion: make Aliyah (return to Israel),” tweeted Benjamin Weinthal, a noted political commentator on German affairs and Fellow for the Foundation for the Defense of Democracies (FDD).

In early 1930, Mülheim was home to a tiny Jewish population of around 600. According to local historical records, while many fled the country in the wake of Nazi takeover, 263 Jews were murdered by the Nazis during the Holocaust. The whereabouts of 53 Jews, who were deported to the Nazi Concentration Camps, remain unknown to this date. The fact that a Jewish community could reestablish itself in the city, is a miracle in itself. The resurfacing on antisemitism, this time imported from the Middle East, makes the future of this tiny Jewish community highly uncertain.

Video: Demonstrators in Berlin chanting ‘Jews, remember Khaybar, the army of Muhammad is returning’ on Saturday

A real shame to see this. I would say when faced with threats you don’t back down but make the event bigger and bring in extra security. In this case, I’m not one to judge if the injuries and/or death is worth it. Europe’s leaders have once again let down God’s chosen people.

The Sharia bunch is winning. Europe’s leaders face no risk themselves from their actions.. Voted out or fired… big whoop. The segment of the community breeding suicide bombers faces no risk either. The solution is to not only better intimidate that segment, but back it up with reprisals. Tit for tat only works when the tit is much bigger than the original tat.

And, in addition, as the number of Muslims in European countries increases, there inevitably follows an increasing willingness on the part of certain craven and self-serving (non-Muslim) politicians to pander to Muslims’ anti-Israel and anti-Semitic sentiments and to attempt to curry favor with them via rhetoric and policy proposals which are in line with Muslim attitudes. Politicians such as Geert Wilders and Nigel Farage, who have the gumption and the will to attempt to preserve their respective countries’ borders, secular democratic institutions and unique culture are the exception, when, they should ideally be the rule.

Are European Jews going to remain passive in the face of Islamic aggression? Is that what they’re really going to do? Are they going to demand the German state protect them? Really?

Amazing how they capitulate to these savages rather than make the savages obey the law.

Why, it’s almost like they’re importing Jew haters on purpose.

‘almost’ ?????
Mutti is very happy to see this –
she has NO kids, somebody will need to clean the bedpans.

I urge all Jews still living in Eurabia to leave the Jewish burialground and move to our homeland Eretz Yisroel.

At this point, Islam has no need of forceful propagation at the point of a sword (or, a bomb blast), when self-imposed, utterly emasculated dhimmitude in the names of “diversity,” “tolerance” and “multiculturalism” represent the default postures of Europe’s political leaders.

The Germans didn’t finish the job of eliminating Jews from Germany under Hitler so they’ve imported millions of Muslim barbarian mercenaries to finish the job.

search for Haj Amin, WW2.
nothing new here, the Allies did not try him as a war criminal –
the Brits are hardly better.

nor was Ste Roosevelt – if not for HST the UN would not have recognized Israel,
Eisenhower was not a lover of Zion.

Is this the same Germany that started two world wars? Where is the backbone or leadership? First, they import over a million sharia law followers and then they have a rise in anti-semitic activity! WTF did they think was going to happen? Next Octoberfest will not be allowed to have alcoholic beverages or women serving in traditional German maiden garb. The Germans had better learn how to say “Goodbye” in Arabic.

Merkel is succeeding in finishing the job begun by the Reich. Diversity Is Our Strength!

They’ve been trying to do that for a long time.

The New Caliphate is likely just an excuse.

How utterly tragic that Europe (with the notable exception of the four Visegrad nations) has failed to learn to lessons of World War II, and, to take stock of the incredibly steep cost paid by millions of people, in order to confront and to defeat, National Socialism.

National Socialism’s ghost is resurrected in the form of contemporary Islam in Europe, with millions of Muslim jackboots following their supremacist, totalitarian and belligerent ideology of hate now constituting the new brownshirts and SS squads.