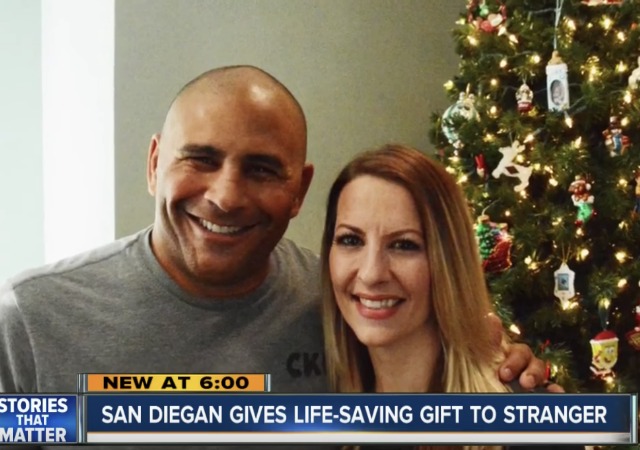 Just a reminder that there is good in this world. Melinda Ray, 35, and a mother of three, has a genetic disease that was destroying her liver. candidates for a transplant kept falling through and she shared her plea for a donor on Facebook. Her husband shared it. Her family shared it. Her friends shared it. Strangers even shared it, which led to one amazing man. From KVUE:

Robin Ihnfeldt heard about Melinda Ray’s condition through her friend, Melinda’s sister over the summer. She told her husband, Jeff, that Ray had been unable to find a match. Without hesitating, Jeff Bramstedt, a 47-year-old former Navy SEAL from San Diego, California, said, “I’d do it.”

“He’s always been an amazing man,” Robin Ihnfeldt said. “He hears bullets and he runs into these situations.”

Bramstedt, now a skydiving instructor and Hollywood stuntman for films like “Iron Man” and “Deepwater Horizon,” turned out to be a match for Ray and agreed to the 10-hour transplant surgery. But doctors at UCHealth University of Colorado Hospital warned him this could be risky.

Chief of transplant surgery Dr. Elizabeth Pomfret said she told Bramstedt, “There’s a lot of things that can go wrong, including the risk of dying.”

“I think I probably considered it for all of half a second before I said, ‘I’m up let’s do this,'” Bramstedt told ABC News.

Three weeks ago, Bramstedt traveled over 1,000 miles from California to UCH in Aurora, Colorado, where the surgical teams successfully transplanted 60 percent of his liver to Ray — unlike other major organs, the liver can regenerate itself.

After going through the surgery, doctors joked with Bramstedt that it would be 10 weeks before he could jump out of an airplane again, but he said he has gained something important through the experience.

“I feel that I have a little sister now. We literally share DNA at this point,” he said of new bond with Ray. “She gets extended years, she gets to raise her kids, to be the mother that she’s always wanted to be and live out life with her husband.”

Bramstedt says he hopes other healthy veterans will consider volunteering to make a transplant for someone who needs it.

“You’re going to change someone’s life,” he said. “It could be the difference between life and death for somebody.”

Kieran, 7, drew a an upside-down, bean-shaped liver with a smiley face, writing, “Your dad is my hero.”

“It gave me really great hope, and humanity, and hope that I could be a mom and a wife, because that’s something I wasn’t sure was going to happen through the year,” Melinda Ray said. “And just the fact that someone would put their life on hold for me and stop their life and save mine, you know, it meant everything to me.”

Bless this wonderful man! He is indeed a hero. So many times we hear about some silly person being called a hero that at times it seems to taint the very word. This man shined it back up for me.