First time in the EU’s 24 years history the “Nuclear Option” has been triggered against a member state. 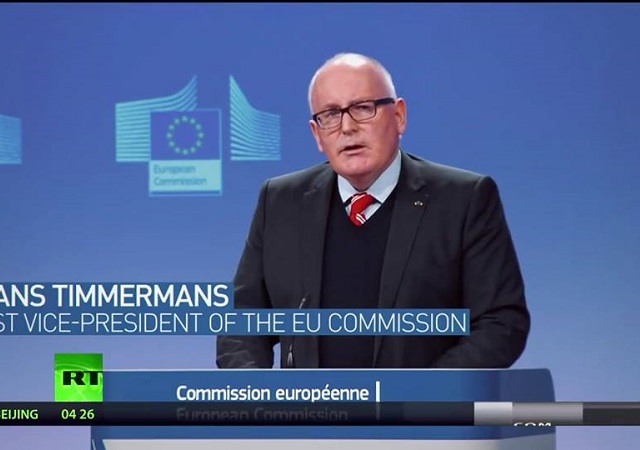 The European Union has launched disciplinary proceedings against Poland, accusing the county of breaching the EU’s “core values” over a series of judicial reforms passed by the Polish parliament.

The European Commission, the EU’s executive body, triggered Article 7, also dubbed as the “Nuclear Option.” The process could lead to economic sanctions and suspension of the country’s voting rights within the EU’s decision making bodies.

This is the first time in the EU’s 24 year history that such an extreme step has been taken against a member state. The announcement came exactly a week after German Chancellor Angela Merkel expressed her support for punitive measures against its eastern European neighbor. “If it comes to a decision, we will back them [the EU],” Merkel’s spokesperson said last Wednesday.

“If a unanimous decision is reached [by the EU member states], [Poland] will face punitive sanctions,” reported Business Insider‘s German edition. “The German government has aligned itself with the decision the European Commission.”

“We are doing this for Poland, for Polish citizens,” EU Vice-President Frans Timmermans said while announcing European Commission’s decision to trigger the Article 7 of the EU Treaties, a series of multilateral pacts ratified between 1951 and 2007. “Judicial reforms in Poland mean that the country’s judiciary is now under the political control of the ruling majority. In the absence of judicial independence, serious questions are raised about the effective application of EU law,” Timmermans added.

Poland is showing no signs of backing down.

President Duda defended the reforms, saying the measures seek to end “communism inside the Polish judiciary.” He justified the need for parliamentary oversight against EU-backed judicial activism. “I don’t see a problem with parliament having more influence over who becomes a judge.”

Hungary came out in support of Poland. Prime Minister Viktor Orbán declared his government’s intention to veto any sanctions tabled against the country at the European Commission.

German newspaper Die Welt reported the launch of the proceedings:

The European Commission has called upon its member states to start an unprecedented legal proceedings against Poland due to the controversial judicial reforms, Brussels announced on Wednesday.

These are the first proceedings in the EU entire history involving the Article 7 of the European Treaties. The reason for the measure are the judicial reforms of the ruling nationalist conservative, the PiS, that undermine the rule of law and the separation of powers.

Warsaw passed 13 laws in total that pose a “serious threat to the independent judiciary”, EU Vice-President Frans Timmermans said on Wednesday. In addition to that [Brussels] is suing Poland in an ongoing infringement proceedings over the issue of judicial reforms in the [EU-run] European court of Justice.

We are doing it with a heavy heart, but there are no other options, Timmermans said. As the  “custodians of the treaties”, Commission is obliged to act whenever the rule of law in under threat in a member state. “It is not about Poland, it’s about the whole of the European Union.” [Translation by the author]

“Brussels Nuclear Option shows its helplessness,” commented the Die Welt in an editorial piece. “For legal processing envisaged under the Article 7 of the European Treaties against Warsaw, there has to be unanimity among the head of governments of Europe.” And “that’s not going to happen” because Hungary is going to veto any such move, the newspaper added.

The current debate may be focused on the issue of judicial reforms, but the EU also wants to send a message to other European detractorss as well. Last week, Brussels began legal proceedings against Poland, Hungary, and Czech Republic for blocking the EU migrant relocation plans to settle some 160,000 migrants among its member states.

As German newspaper Die Welt noted, the EU’s open threats could be a sign in its weakening position. Germany’s Chancellor Merkel still hasn’t been able to form a coalition government. If she fails to reconcile political differences with her main rival left-wing SPD party, Germany will head to new elections early next year. According to the latest poll data, Germany’s anti-EU AfD party will the biggest winner in that scenario.

Parliamentary elections in Austria just installed a right-wing coalition in power, further strengthening the position of eastern European countries opposed to the EU’s Migrant Policy and encroachment of their national sovereignty.

It is highly unlikely that the EU will push Poland, the strongest Eastern European member state, over the edge less than six months after the Brexit debacle. Regardless of what the EU officials or the mainstream media say, Poland is in a much stronger position than the eurocrats sitting in Brussels. Poland can survive as a nation state outside the EU, but Brussels can’t afford to lose another member state.

Over/under on the next development being “Poland Invokes Article 50”?

Oh, but I’ve heard that Germany is massing its tank battalions along the Polish border…

but maybe Frau Merkel appears to the the type that will be happy if the Polish President pulls down his pants and she gets to take a strap to his bare bottom.

notamemberofanyorganizedpolicital in reply to Tom Servo. | December 21, 2017 at 1:15 pm

I feel a Polish Christmas coming on…..

Lots of great Polish food stuffs in the stores to buy these days.

….those would be the German tanks that are no longer in service because of maintenance and there being no spare parts to fix them…..those tanks

But, like other German things, the workldmanship and finish are exquisite I’m sure. /

Poles are tough, smart, and well-educated on the dangers of the “isms”.

They might just find that continued association with the EU could easily be far too costly.

Unfortunately – Poland has the Russians on the other side. The perceived deterrent of NATO is the only reason they will stay in the EU. And, the crazy thing is – NATO is a deterrent only because the USA has troops there.

Well actually its the Lithuanians and the Ukrainians and whatever the Belarussians think they are on any given day.

And Russia no longer has the ground forces to launch an invasion of anyone, those days are long gone. Putin does a great job of playing a weak hand, and he makes people think he’s a whole lot stronger than he actually is.

Germany had a great bluffer like that, too. Adolf something.

“NATO is the only reason they will stay in the EU.”

Well, no, not the only reason. There is considerable private investment in production facilities in Poland, as Poland has lower costs than many EU states. If the output of these facilities were to be subject to tariffs when entering EU countries these facilities just might close, with substantial negative impact to Poland’s economy.

The Swiss don’t seem to do badly at all. In fact, NOT being in the EU seems to have done a world (see what I did there?) of good!

NATO and the EU are two very different organizations and you certainly do NOT have to be a member in one to be member in the other.

The only appropriate response to this is,

Access to the EU labor market has been a yuuuge financial benefit to Poland.

Not something it will be easy to give up.

Brittan won’t suffer from a loss of trade with the EU. It may, in fact, have much greater trade opportunities.

Another chance for Britain to align itself with Poland against Germany. History does repeat itself.

Let’s get this straight.

Poland (and Hungary)…who bore the brunt and thwarted the Ottoman’s attempt to invade and enslave Europe for centuries…at their own expense…who was then betrayed by thankless Europe to the Third Reich and later the Soviets…and survived that ordeal at their OWN expense…is going to take orders from the same useless, sorority of culturally suicidal, Caliphate-loving countries because….why?

Because it’s in a bad neighborhood? The only reason Poland became independent after WWI was because both its neighbors lost that war …

The EU was a bad idea, bad for people who ended up seeing their sovereignty surrendered to a bunch of bureaucrats.

notamemberofanyorganizedpolicital in reply to Exiliado. | December 21, 2017 at 1:17 pm

Definitely not their “Mark of the Beast” 1-World Government, that they’re trying to force on U.S..

France gets the oil, while Italy (Poland, etc.) gets immigration reform.

The EU persists to cover-up the collateral damage from global social justice adventures and Planned Parenthood (e.g. selective-child). Germany persists in restructuring its debt, with a progressive rejection by member States.

After having visited the Balkans this summer, and seeing very few “refugees” among their numbers, I project that Poland will be followed by Hungary, Slovenia, Romania, Bulgaria and other Eastern European countries. They are no longer buying what the EU is selling.

With such a bloc getting stuck between Russia and Germany, do you see a third independent pact forming? Miedzemorze 2.0?

I think countries are going to start looking out for the interests of their citizens first, so I do see a realignment segregating “Old Europe” and “New Europe”. How this plays out will likely be apparent next year.

What will really throw a monkey wrench in this whole shebang is if Merkel can’t form a government, something that is looking increasingly less likely and then the Anti-EU faction gains more power in Germany.

The EU is an abject failure that just won’t die.

There is already a block called the Visegrad 4….Poland, Czech Republic, Slovak Republic, and Hungarian’s.

….and don’t forget Slovakia…the socialist commie PM here, Robert Fico, has said: “There are no mosques in Slovakia nor will there ever be”.

“…Article 7, also dubbed as the “Nuclear Option.” The process could lead to economic sanctions and suspension of the country’s voting rights within the EU’s decision making bodies.”

Golly. It’s as if these unelected oligarchs in Brussels seek to place Poland behind an iron curtain, or something…

Poland should double down on using the “middle finger option” back to the EU.

In 1683 Jan III Sobieski, King of Poland led his Polish Hussars against the Islamic hordes at the Battle of Vienna and saved Western civilization.

The West owes Poland. We need to save them from the EU based Muslim hordes today.

“We are doing this for Poland, for Polish citizens,” EU Vice-President Frans Timmermans said…”

….No one in Poland elected ole Frans Timmerman to anything….

Witold Pilecki would be proud.

Ha! The Germans finally have a legal way to attack their neighbors to the east! How foolish of the Poles to set themselves up for it!

Now you know why the EU has started arming a military. They can’t allow defection from their plan to hand Europe over to Islam.

With this entire anti-immigration issue being driven by the public perception of how the vast immigration of people from the Middle East/North Africa that share no similar values with the Poles as being bad for their country and how the public wants no part of it, it takes an enormous amount of hubris to declare that the EU is doing this heavy handed action because “We are doing this for Poland, for Polish citizens.”
>
This marks the official end of the EU. When the EU, filled with and led by unelected officials, feel they have the right to force countries to do what the EU demands and to heck with what the people of that individual country demands for their own country, then the leadership is corrupt and cannot stand. The EU is now officially dead; they just do not know it yet.

You WILL roll over and accept an Islamic Invasion or else!!

Interesting to see what really gets the Eurocrats attention.