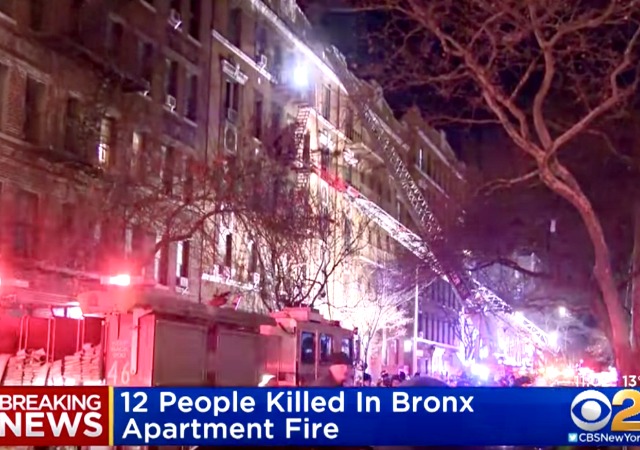 On Thursday night, a fire raged through a building in the Bronx, which killed 12 people, including four children.

New York City Mayor Bill de Blasio said that the city’s deadliest fire in more than a quarter-century likely started because of children playing with a stove in a first floor apartment.

Four other people were critically injured and fighting for their lives after the blaze broke out shortly before 7 p.m. ET Thursday at a five-story building near the Bronx Zoo. Witnesses described seeing children without coats huddled on fire escapes as firefighters worked through icy conditions to bring the flames under control in about two hours.

“By the time I got downstairs, the fire had already escalated from one apartment to two, two to almost three. All I see is a bunch of kids on the fire escape, cold, with no jacket, no pajamas, no nothing,” said Rafael Gonzalez, who lives across the street.

The dead included four children: three girls ages 1, 2 and 7, and an unidentified boy. The oldest was a 63-year-old woman. De Blasio called the city’s worst fire tragedy in a quarter-century and “an unspeakable tragedy,” and warned that the death toll could rise.

Unfortunately, the high winds and freezing temperatures made it hard for firefighters to control the fire.

The Department of Housing Preservation and Development have records that show the “apartment building had open violations for a broken smoke detector and carbon monoxide detector in a first-floor apartment.” But as stated above, these do not appear to have caused the blaze.

The New York Times reported that a woman, her two daughters, and her niece died on the fifth floor:

The woman, Karen Stewart-Francis, 37, and two of her daughters, Kylie Francis, 2, and Kelly Francis, 7, and a niece, Shawntay Young, 19, were part of a family from Jamaica that had 13 members living in the building, Ms. Stewart-Francis’s mother, Ambrozia Stewart, said on Friday.

“My daughter. My grandchildren. Tell me, what am I going to do?” Ms. Stewart wailed, standing near the building, 2363 Prospect Avenue in Belmont, about 8 a.m. as a generator and sirens whirred in the background. “Four people I lost.”

Continue reading the main story
Her son-in-law, Holt Francis, was in a coma at Jacobi Medical Center, Ms. Stewart said.

A 1-year-old girl and a boy whose age was not given were also among those pronounced dead, the police said early on Friday.