Is the science finally settled? 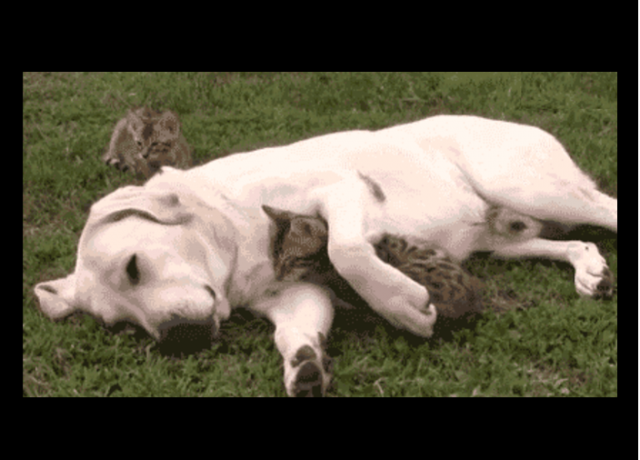 There are two kinds of people in this world: dog people and cat people. The personalities of these two camps are about as distinctive as the species themselves.

Rancor is not limited to which species is superior but includes heated debates over which is smarter.

According to a recent study, dogs have about “twice the number of neurons in their cerebral cortexes,” leading some scientists to believe they’re the smarter species of the two.

One of our most contentious debates may now have an answer.

Dogs, it turns out, have about twice the number of neurons in their cerebral cortexes than what cats have, which suggests they could be about twice as intelligent.

This finding was provisionally accepted for publication and will soon publish in the journal Frontiers in Neuroanatomy. A team of researchers from six different universities in the U.S., Brazil, Denmark, and South Africa contributed to the research.

One of the study’s authors is noted neurologist Suzana Herculano-Houzel. For the past decade, the now Vanderbilt professor has been studying cognitive function in humans and animals. To get as precise a measurement as possible, she starts by counting neurons, a special type of nerve cell found in the brain that transmits messages.

“You take the brain and turn it into a soup,” she said, matter-of-factly, as the first step to finding these neurons. From there, she said, you end up with a number of suspended nuclei from neuron cells that allow the researchers to estimate the number of neurons present.

Why use neurons and why do researchers believe they’re the best rubric for intelligence?

“Neurons are the basic information processing units,” said Herculano-Houzel. “The more units you find in the brain, the more cognitively capable the animal is.”

To make her results-yielding “brain soup,” as she calls it, the research team used only a part of the brain called the cerebral cortex, the crinkly outer layer that sits on top of the brain’s other pieces. While different parts of the brain process outside stimuli like sight and touch, the cerebral cortex puts these stimuli together to drive decision-making and problem-solving, among other functions.

“The cortex is the part of the brain that gives complexity and flexibility,” said Herculano-Houzel.

To get an idea of how many neurons dogs and cats might typically have, the team used three brains—one from a cat, one from a golden retriever, and one from a mixed-breed small dog. Two brains were used to study dogs because the canines vary so greatly in size.

In each of the dogs’ brains, despite varying in size, researchers found about 500 million neurons, more than double the 250 million found in the cat’s brain.

Based on the number of neurons found, they speculated that dogs have roughly the same intelligence as raccoons and lions, while domestic cats have comparable intelligence to bears.

Even if the science is settled here I have no reason to believe argument over the “better” species will end any time soon.

There are two kinds of people in this world: dog people, and the ignorant.

Grumpy cat says:
There are two kinds of people in this world
And I don’t like them

Sample sizes are too small and not diverse enough. They need to study more breeds and compare them to wild canines and cats.

I have raised and bred both German Shepard’s and Rottweilers for about 50 years, and typically have 3-4 cats at a time over that time frame.

I took in one stray which had really unusual traits, it was much smarter and friendlier than any cat I have seen before. It turned out that he was a black Egyptian Mau. They are very smart and just as loyal to their masters as dogs.

Two years ago we started raising Maus, and are now selling our first litter.

Almost all of my dogs have had their own cat and, from what I could glean, they had no problems with them so long as the cat waited until the dog did the turn-around a few times. I wonder how a dog knows that it has turned around enough times and in the right direction before it settles down.

“I wonder how a dog knows that it has turned around enough times and in the right direction before it settles down….”

They can count, silly.

Dogs have masters, cats have staff.

Dogs have people, cats are prisoners.

Dog Think: My owner feeds me, My owner loves me. My owner is a god!

Cat think: My owner feeds me, My owner loves me. I must be a god!

Dog Think: My owner feeds me, My owner loves me. My owner must be a god!

Cat think: My owner feeds me, My owner loves me. I must be a god!

Actually, although I’m a dog guy, a pleasant, sociable cat can be a real treat.

Okay, now do dogs and liberals.

No contest – dogs are capable of learning.

A dog smarter than my teenage daughter?

Who will win the “alpha B” game? My wife or my daughter?

Someone paid supposed smart people to come to this conclusion. Who is smarter, some of the population that already knew this as common knowledge, or the educated idiots who studied this?

Dogs may have more neurons but cats do more with what they have. Dogs have to go outside in the cold winter to relieve themselves – cats get to use a nice warm litter box that their human staff keeps clean. Cats have dignity and make people earn their affection – dogs just slobber over anyone who will scratch their head.

My cat has been outsmarting the idiot dogs in the neighborhood for his 3 years here with me.
The dogs are really fun to watch getting bamboozled by my republican cat. He earns his keep, rodents, snakes and other sleaze do not show up here. The squirrels have moved on also and you’d understand if you ever saw my cat run up a tree like he was on flat ground. He’d shame Olympic athletes with his speed and agility.
And being an outdoor cat, his litter box only needs cleaning if I go away for a week or so and he doesn’t like who feeds him and lets him out.

“Dogs, it turns out, have about twice the number of neurons in their cerebral cortexes than what cats have….”

Which only proves that cats are *twice* as smart as dogs, since cats are better problem solvers than dogs even with half the neurons …

Dogs or cats … coffee or tea … Fender or Gibson … polyester or rayon … Winchester or Remington … Ford smallblock or Chevy … Mary Anne or Ginger … Colt or S&W … The Beatles or Elvis … Hi-fi or Stereo … inline or radial … Betty or Veronica. It’s all so … so … so Manichean.

Come on, I’m a cat person, but even I knew that. Cats substitute charisma for brains.

And how does this researcher know that she didn’t, by chance, check the brains if two genius dogs, and the brain of an imbecilic cat?

In either case, both species are able to survive on their own, unlike liberals who require gov’t programs. This proves that just having neurons isn’t enough, you have to use them.
The issue is still undecided.

Did I say that right, Kitty?

Two famous Far Side cartoons: what cats hear and what dogs hear.

Dogs may be (and may not be) smarter, but cats seem to get what they want by playing stupid (indifferent). Throw a ball for a dog and he chases it and usually brings it back for another throw. You trained the dog. Throw a paper ball for a cat and he sits there while you eventually fetch it yourself. The cat trained you.

Okay, you dog lovers can say what you want about cats, however just remember that when a cat looks at you, he/she is really thinking of ways to kill and eat you.
Most of the time though, they just can’t be bothered.

Winston Churchill pointed out that a dog looks up to you, a cat looks down on you … but a pig regards you as his equal.

I agree with Konrad Lorenz, the Austrian naturalist, who found it unbelievable that one could like dogs and not like cats, or vice versa. I and my wife have both a dog and a cat, given to us by our animal loving daughter, who has two cats and a dog.

I accept that on AVERAGE dogs are smarter than cats, but my daughter’s cat “Poe” is the smartest pet I have ever met. When my daughter went on vacation, we watched her cat. We had a catfood container with a locking top. “Poe” watched us open the container, figured out how to open the container, and in the middle of the night we woke up to the sound of a loud crash when Poe opened the container and knocked it over to get at the food.

For years I have been telling people that the secret to my happiness is that I married a woman a lot smarter than I am. My friends all said that they would hate to see one who isn’t.

Then we got the puppy….he loved carrying around one of my old socks, but he was a little booger and it would get all tangled in his legs. He laid it down, folded it twice and carried it without a problem. It was at that moment that I realized I was the third smartest member of the family.

A couple of years later, he was making a hell of a racket chewing in a plastic coke bottle. I asked if he didn’t have something to chew on that didn’t make so much noise. He disappeared into the laundry room and came back with a piece of round foam caulk and started chewing on it.

I don’t mind being number three, but he could be decent enough to give me some investment advice.