“you are wearing hats that completely violate safe space policy” 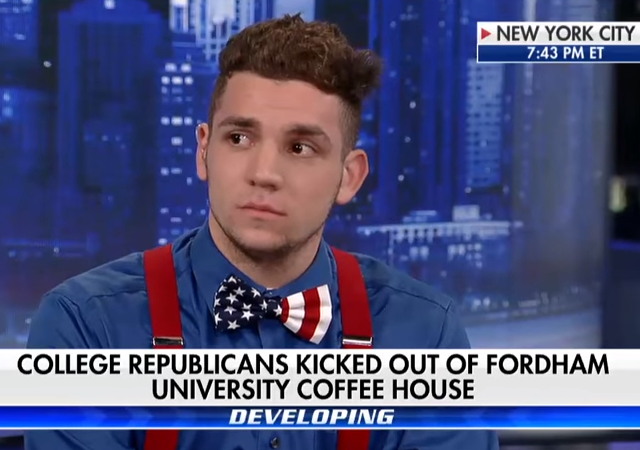 College Republicans walked into the campus coffee shop at Fordham University and were told that their MAGA hats violated the safety policy before they were told to leave.

Members of the Fordham University College Republicans were asked to leave an on-campus coffee shop because their MAGA hats apparently violated the shop’s “safe space policy.”

In a video obtained by Campus Reform, the self-identified president of Rodrigue’s Coffee House, a coffee shop run by a student club, is seen telling the College Republicans they have five minutes to get out of the coffee shop.

“I am protecting my customers,” the president said.

“We are your customers, we bought something,” a CR member replied.

A student then asked for a refund, to which the president responded, “[y]ou had some coffee… do not try to outsmart me.”

“You are threatening the integrity of our club. This is a community standard—you are wearing hats that completely violate safe space policy,” she said. “You have to take it off or you have to go.”

One of the students then asked the president to explain what she thinks the MAGA hat stands for, to which she replied, shouting: “Fascism, Nazis! You have three minutes.”

One of the students appeared on FOX News to describe what happened:

On “The Story,” one of the College Republicans who was ordered to leave the cafe, Aaron Spring, spoke out about the incident.

“Part of what she was talking about was that we violated the safe space and that we represented Nazism and fascism, and all this just made-up liberal propaganda, really,” Spring said.

Martha MacCallum asked if they went to the coffee shop with the intention of provoking a confrontation.

“No, of course not,” Spring said. “We were just a couple friends going to get coffee, having a talk.”

He noted that the shop has a sign that says “all are welcome,” but he said that apparently does not apply to people who have different thoughts and opinions.

Watch the video segment below:

According to John Sowden of The Hill, Fordham is investigating the incident:

Fordham University issued a statement on Saturday to The Hill, saying that the university has no campus-wide safe space policy and that the video amounted to a “dispute between students.” The school also indicated that it is investigating the incident.

“There is no University safe space policy, nor one that excludes any members of the Fordham community from any public spaces on the basis of their political views. Fordham is a community that values diverse opinions, and in which students should disagree with one another in a civil fashion,” Fordham assistant vice president Bob Howe wrote in an email.

It’s fun to imagine what would have happened in 2009 if members of the College Democrats were thrown out of a campus coffee shop for wearing Obama “hope” hats.

Exposing red liberal snow flakes one campus at a time.

Remember when college was an opportunity to explore diverse thoughts and beliefs?
So all are welcome but some are more welcome than others.
I’m certain if someone came with an antifa flag they would have been a great enhancement to the safe space.

Note to college students: the world has no safe spaces. The only time you are safe is if you are dead. The world has a diverse viewpoint. It is filled with good and evil plus many opinions. We live in a free nation where all are allowed to speak. You can choose whom to listen to but you cannot silence those who disagree with you.

Time to grow up

So why did they leave? They should have refused to leave and dared them try to call the cops to remove them. If they tried to remove them by force, call 911.

Perhaps they should have contacted their comrads-in-hats on the campus and staged a sit-in.

Simply, if they wore Antics gear the coffee shop would have known they would be burned down or if radical Muslim…killed. But then Antifa and radical Muslims probably would have been welcomed as kindred spirits.I

This is actually better. For a whole host of reasons:

– It does not risk any jail time from a “keep the peace” cop that doesn’t understand basic civil rights.
– It does not risk any prosecution from a DA that can’t understand the difference between a “public” space and a “private” space, and who actually has the right to “exclude” individuals FROM that space.
– It exposes the hypocrisy of the Coffee Shop.
– It exposes the Progressive/Marxist bent of the Coffee Shop “President.”
– It damages the Coffee Shop financially (bad press, notoriety, people looking to avoid controversy will now avoid, people attempting to CREATE controversy will now go there)
– It puts the UNIVERSITY on the defensive, because the UNIVERSITY now has a civil rights problem, and if they fail to discipline the Coffee Shop club, they’re going to be looking at a “civil rights” lawsuit for allowing viewpoint discrimination at a supposedly “neutral” club.
– It puts the UNIVERSITY on the defensive, because I’m sure that the act of this Coffee Shop president violates the terms of the Student handbook, the Club handbook, and likely the funding guidelines for University clubs.

The Progressives gave us the playbook. USE EVERYTHING. USE EVERY SINGLE PROCEDURE AND PROCESS to damage them.

I’d sooner get kicked out by a cop than by a barista.

The trick (in my experience) is to resist the jerks, but NOT the police.

When challenged or threatened, make it clear that you look forward to a nice chat with the police, and you’ll be happy to wait right there until they arrive.

That will probably end it. If it doesn’t and the police do indeed arrive, don’t fight them; if they suggest that you leave, don’t mouth off, leave. Your fight isn’t with the police.

It doesn’t always work, but if one can manage the self-control, it’s worth giving it a shot.

That absolutely would have been the proper response. It literally would have been the mirror image of the “lunch counter” incidents during the civil rights era.
Complaining about it on Fox News after the fact, while possibly cathartic for the participants, doesn’t move the ball down the field one yard.

if the coffee shop is not a ‘members only’ shop, they need to be prosecuted for rayyyycizm.

seriously though, if it is open to the public, how is this any different then ‘whites only’ shop ?

“…how is this any different then ‘whites only’ shop?

It is the same Democrat thinking. I remember the old Democrat racists (Klan members and politicians) and what this person said sounds very similar to the “whites only” demands made back then.

It is a hate crime, a crime of intolerance, and should be prosecuted as such. Milhouse’s solution is correct.

Make some HOPE hats with “Trump gets a second term” in a small font. Show them afterwards.

Come on guys, tone down your hate! Next time “Make America slightly better than it was yesterday” hats. Baby steps. Pfft.

Scenario 2: Go in, start a discussion on the Christian bakery refusing gay couples. Get their predictable response, then put on your MAGA hat. Count to ten for hypocrisy to ensue.

This nonsense will continue to backfire.

Our children are not stupid: they are merely young. They go to school, they watch this kind of bullying, and they get turned off by the injustice. This is how DJT won the last election.

They should have said they were throwing him out because his suspenders were an affront to human dignity.

I agree. He has a serious message, but he beclowned himself.

The bake the cake comments are funny because of the hypocrisy, and I laughed, …but the employees were not asked to do anything different or special for these patrons. It required nothing of them that they weren’t already doing for everyone else.

The lunch counter is a more appropriate metaphor. Now if they demanded that they create an I LOVE TRUMP cake……

The should use the same civil rights tactics that MLK used in the South. Have one person enter the cafe every 10 minutes sit down and pull out their MAGA hats and when confronted they can sing “We shall overcome”.

“One of the students then asked the president to explain what she thinks the MAGA hat stands for, to which she replied, shouting: “Fascism, Nazis! You have three minutes.”

I do believe the irony is completely lost on them…