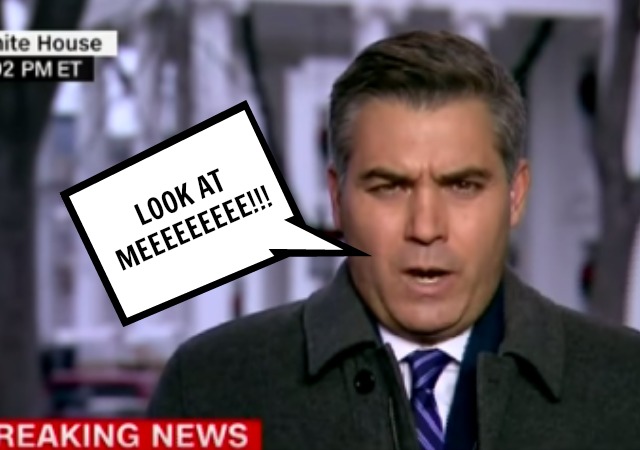 Acosta asked about Trump’s claim that media is “fake news”, which lead to a heated exchange with White House Press Secretary Sarah Sanders.

“When journalists make honest mistakes, they should own up to them, and a lot of times you don’t. There’s a very big difference between making honest mistakes, and purposely misleading the American people; something that happens regularly,” said Sanders.

Acosta demanded a specific example of a time CNN had put out false information, and then, fireworks.

Now, Acosta is whining about the hostile treatment he received from the White House.

Prior to this morment, @presssec issued a warning to me. She said if I asked a question of Trump at the bill signing "I can't promise you will be allowed into a pool spray again." Sorry Sarah.. we won't be intimidated. https://t.co/RZgJpXpyEg

As for a specific instance of CNN’s journalistic malfeasance, look no further than Friday: CNN’s Big Scoop on Don Jr. – Wikileaks Email Collapses In Real Time.

Holier than thou sonuvabitch

EBL in reply to notamemberofanyorganizedpolicital. | December 12, 2017 at 6:34 pm

Who does Acosta think he is, Me-Again Kelly?

Until he’s actually thrown out, it’s all just bluff & bluster.

So throw him out and let him rant all he wants about how much he isn’t intimidated.

Remind me, but wasn’t it Acosta’s network last week that doubled down on the Don, Jr 6/4 Wikileaks email story, when the information was made actually made public the day before the email was actually sent, on 6/13? CNN claimed that they had two credible sources,, who had seen the email. Whoops. The usual small retraction when the other networks started calling BS, after having run it wall to wall all day. Fake news? Or just gross incompetence?

IRS should audit the hell out of Acosta. Where’s Koskinen when we need him 😉 Probably still peeping in Lois Lerner’s windows 🙂

It’s a matter of point of view, I guess, but I think Sanders is actually way too nice to him.

Honestly, there are any number of things I would love to see with the MSM press corps White House assignments.

1] When they start acting rude or entitled, just have their press pass jerked for a few weeks. Let them whine on the sidewalk outside the White House.

2] Somebody (or several somebody’s) just knock the teeth out of a couple of these butt-heads. They really get on my nerves. Sarah Sanders seem like a real lady to me and is probably a great Mom. Who do these clowns think they are?

3] Just do away with the White House press corps entirely. Allow, on a rotating basis, 5 polite reporters to ask questions during a press conference and have the other’s sitting in another room. Any troubles, jerk their press pass.

If the press corps want to stir the pot and cause conflict, then why should anyone give them the time of day? Let them make up their lies from whole cloth.

Acosta, if you can’t stand the heat…

acosta is a rude obnoxious jackass and represents perfectly the
sewage pit that is the current status of m s m !

Sarah has more testosterone in her little finger than Acosta has in both testicles.

I think he’s starting to LIKE the spanking. Just saying…

I don’t see why we should have respect for a reporter’s profession when they show us every day they have none for it themselves.

Rabid Dog Acosta absolutely refuses to behave with the bare minimum of civility and decorum that his position in the WH Press room requires.

I’d have banned him for a month, the first time he disgraced himself. Six months the next time, and permanently the third.

When are they going to kick this rude ahole out of the WH press room?

These people are laboring under the delusion that they are actual journalists working for actual news organizations. They are not.

These people and their organizations are mere caricatures of journalists and news organizations. They are not legitimate, they are entertainment…and should be treated as such.