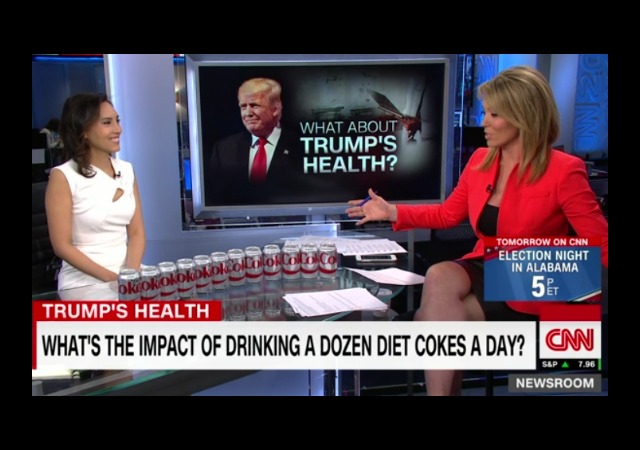 Over the weekend, the New York Times published a glimpse virtual behind the scenes glimpse into Trump’s presidency.

Nestled in the story was the revelation that Trump consumes approximately 12 Diet Cokes daily, Cokes delivered to him by White House staff summoned by a button.

Watching cable, he shares thoughts with anyone in the room, even the household staff he summons via a button for lunch or for one of the dozen Diet Cokes he consumes each day.

The lengthy and refreshingly meaty report explores how “the job has changed him a bit, and he has changed the job,” so naturally, CNN is focusing on Diet Coke.

But wait! It gets better (or worse, depending):

Looking at long-term studies in humans, Swithers noted, the results indicate that people who report drinking artificially sweetened beverages end up at higher risk than non-diet soda drinkers for lots of negative outcomes, including type 2 diabetes, hypertension and stroke, as well as dementia.

A Boston University School of Medicine study from this year found that people who reported drinking at least one can of an artificially sweetened soft drink each day were almost three times as likely to have a stroke caused by a blood clot, compared with those who avoided these diet beverages.

One-a-day diet soda drinkers were nearly three times as likely as those who never drink diet soda to be diagnosed with dementia, as well, the researchers found.

And on it goes, listing study after study about why diet cokes are bad and will kill you dead.

In this particular case, CNN’s devotion to exposing the well-known impacts of Diet Coke addiction is part of a much broader narrative targeting Trump’s overall health, especially his mental health. The goal here is simple: prove just how unhealthy (and therefore unfit) a President we have.

CNN significantly downplayed Hillarys numerous health issues, many of which popped up during the 2016 campaign cycle, panning justifiable questions about the former first lady’s health as tin foil hattery. Neither did they mind a newly minted President Obama’s smoking habit (which he later claimed he kicked). But in one day, CNN cut three separate video segments on Trump’s Diet Coke drinking.

Trite as it may be to say, this is why Trump won. Those fortunate enough to live in flyover country don’t give a damn what Diet Coke does to the appendix. Far more concerning is how looming tax reforms and health insurance overhauls are going to impact the family budget.

But you do you, CNN.

What gets me is that they didn’t report on a TERRORIST ATTACK in NYC but dwelled on this!

Frankly, who were the “sources” that said he drinks all this Diet Coke and eats all this fast food? The same ones who couldn’t read the date of September 14, but read and then TOLD EVERYONE it was September 4th?!?!

Parting question – why is it that CNN is turned on in every Dr.’s waiting room, airport, government lobby (where they have TVs), and virtually any and all public areas where a TV is?! They are the LEAST reliable source, and a farce!!

TURN OFF THE TVs!! TURN OFF CNN!

CNN pays for the airports…I would imagine they extend contracts to other entities as well.

notamemberofanyorganizedpolicital in reply to healthguyfsu. | December 12, 2017 at 2:32 pm

Well at least it’s not Pepsi.

At a guess, he might open 12 cans of Coke in the course of a day but that says nothing about how many of them he actually finishes.

Warm Coke may be popular with some folks but, given a choice, many folks with an option would likely opt for something cold and fresh.

Diet Coke at anything less than very, very cold is intolerable for drinking (kinda like Coors). I’m surprised Trump isn’t being accused of sending interns out to the nearest McD to serve his habit a dozen times a day… and making them pay for it out of pocket.

Amen on Coors and LOTS of ice. I wasn’t aware of Trump having a McDonald’s appetite but I have been known to get one of their fish sandwiches from time to time as well as an occasional Big Mac.

I’d love to get in the White House kitchen and take some lessens from the chefs!

Diet Code doesn’t have to super cold if you are having it with a meal.

The goal here is simple: prove just how unhealthy (and therefore unfit) a President we have.

Just imagine if Hilliary had won. They’d never be able to do a report about the President’s possible health problems!

“All the President’s Cokes”

The Previous President preferred his coke up his nose

Could Coke sue for this since they used their brand rather than just “diet soda”?

But I thought they wanted Trump out of office. What better thing, then, for him to drink something they think will kill him, leading to President Pence? They should be rejoicing.

At least Trump doesn’t snort Coke up his nose like Bill Clinton is rumored to have done. Why do you think Clinton’s face was red all the time?

This actually good for Judge Moore, since Coke is headquartered in Atlanta.

What does that have to do with Alabama?

Yeah, everyone knows that in Alabama, you drink Big Red, and maybe some Nehi for variety.

Whoops. I attribute that to not having had my morning caffeine yet.

Seems pretty clear to me. CNN has shifted their entire operation to one seeking tweets and on the record comments from the President and his administration. I guess they believe that will get them the attention they cannot get from reliable reporting and watchable programming. I wonder if it is paying off for them? Certainly isn’t helping viewership if you look at the numbers.

Everything they do from here on appears to be focused on one thing – getting under the skin of POTUS. To hell with reputation.

Remember the media concern about McCain’s health? Eventually, McCain gave them access to his medical records, viewing only and no copies if I remember correctly. Then, silence about Obama’s and Clinton’s health.

It would be funny if Trump went for his medical checkup and then held a press conference with the doctors afterwards to talk about his great health.

I’m almost sure that Trump doesn’t actually drink 12 full cans of Diet Coke every day (on average). That would be 144 oz. of beverage and he would be spending lots of time in the bathroom.

I’m sure what is actually going on is that one of Trump’s standing orders in terms of having refreshments available, is two ice cold six packs of Diet Coke are within reach each morning. Like a rock star who wants all the brown M&M’s removed from the candy dish back stage.

He probably always opens a brand new can and only drinks a few sips, then puts the can down somewhere, then when the next time he is in the mood for a soda, he just opens up a new fresh fizzy can, not an opened somewhat warmish somewhat flattish half drank can.

Wasn’t there a picture of a glass of ice and soda that everyone complained about because there wasn’t a coaster under the glass and it was on the Resolute desk!

So, the total consumption of soda is probably less than 12 cans.

“Like a rock star who wants all the brown M&M’s removed from the candy dish back stage.”

That was actually a test of competence and attention to detail. If the staff couldn’t get the M&Ms right, then their ability to do other, more critical work would be suspect. Even small oversights, like tightening screws properly or joining electrical wires, could have tragic consequences, as when heavy lights fall onto the stage or special effects explosives misfire.

Why the prominent display of the CNN news reader’s legs?? I thought women don’t like to be objectified.

Ehh, in a few days CNN will issue a “correction” admitting that Trump only drinks two diet Cokes a day…

All Democrat propaganda, all the time.

Obama Loves Trumps Hate And All Else!

Trump, you should know better. Coke Zero is way better!

I prefer to drink Earl Gray, or English Breakfast to complement a meal.

I burned out my receptors for caffeine a long time ago.

They still complained when he took a drink of water during a speech.

All this anti-Coke stuff probably does not play in Atlanta.