A federal judge in Maryland had blocked the travel order from taking effect for anyone with a bona fide family or professional connection to the United States, echoing language the Supreme Court used in June when it allowed Trump’s Second Travel Order to partially take effect. A federal judge in Hawaii had blocked the Third Travel Order entirely (except for North Korea and Venezuela), but was overruled in part by the Ninth Circuit, which held that the restrictions could take effect for foreign nationals lacking the same sort of bona fide connection to the United States.

The Supreme Court has stayed both lower court injunctions, meaning that this Third Travel Order will, for the time being, be implemented in its entirety.

“If a writ of certiorari is sought and the Court denies the petition, this order shall terminate automatically. If the Court grants the petition for a writ of certiorari, this order shall terminate when the Court enters its judgment,” the Justices wrote. In other words, the stays will last until the Supreme Court either hears the government’s appeal and declares the restrictions unconstitutional, or declines to consider an appeal.

Justice Ginsburg and Justice Sotomayor noted that they would have denied the government’s request, while it appeared that Justice Breyer and Justice Kagan joined the five conservatives in siding with the Trump Administration—or else decided to not to make their disagreement public.

The full orders are here (Hawaii) and here (Maryland).

WAJ adds: This is a complete slap down of the lower courts, and something that was well deserved. When Hawaii issued its injunction, I wrote:

I can’t say I’m surprised by the result, considering that the Judge involved here already has ruled against Trump. The problem in this decision, as it was in prior decisions by this and other lower courts, is that the Judge is substituting his evaluation of risk for that of the executive branch.

I also noted, when the 9th Circuit stayed much (but not all) of the Hawaii injunction:

These District Court judges are acting like the litigation in the Supreme Court never took place. While it’s true that SCOTUS never ruled on the merits, the fact that it issued stays of lower court injunctions and scheduled the case on the merits (later dismissed as moot) should have been a message to all but the most tone deaf lower Court judges how to handle subsequent litigation.

Maybe the lower courts will finally get the message. 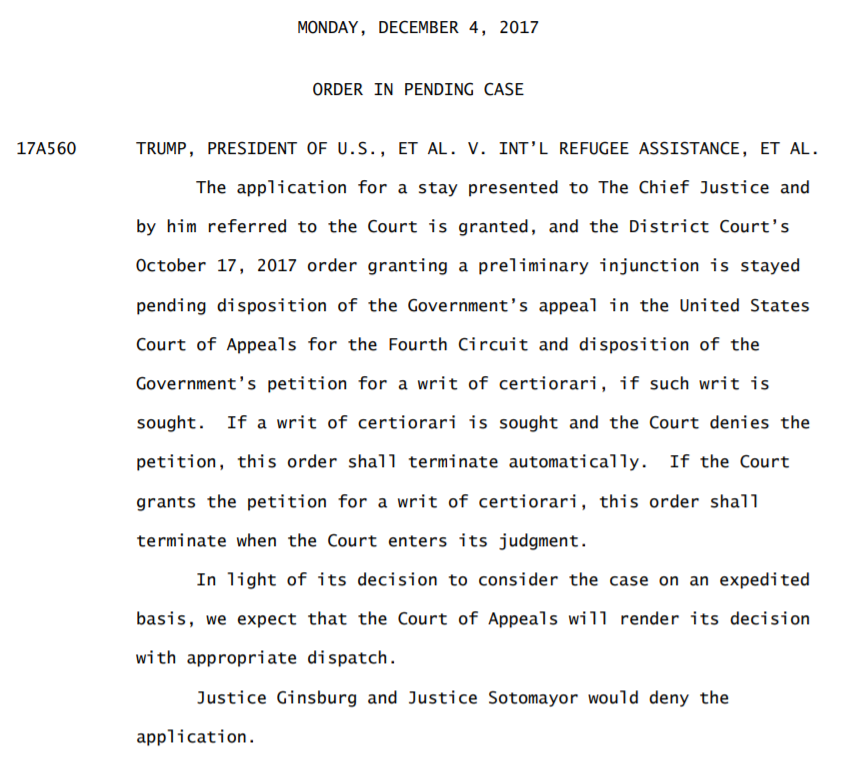 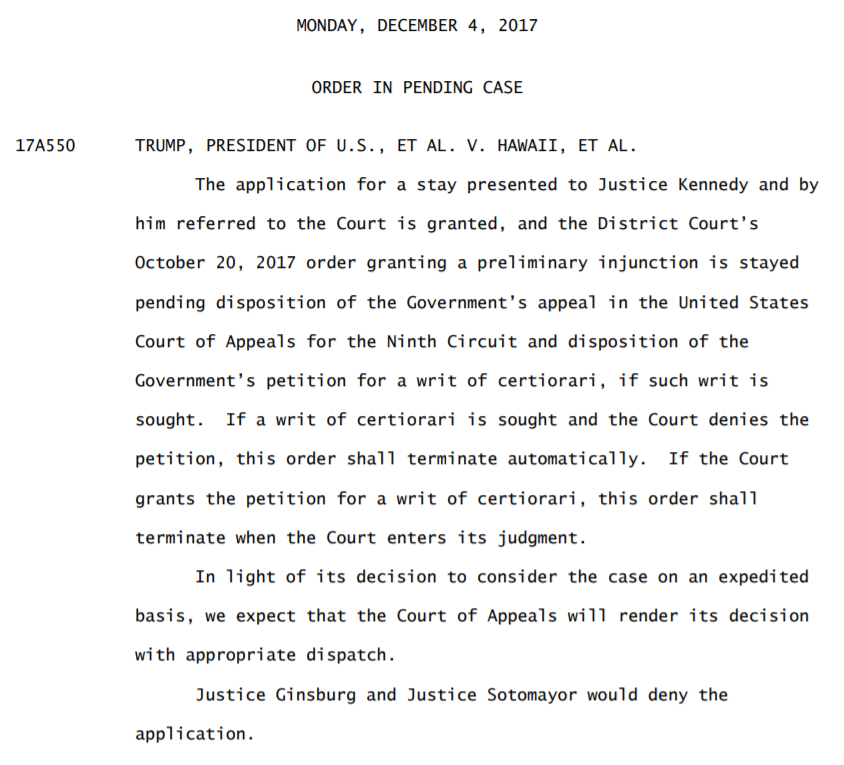 there needs to be mental and physical health certifications for all gov’t federal, Judicial and appointed employees past the age of 79 to vouch for their ability to function in their jobs.

notamemberofanyorganizedpolicital in reply to 4th armored div. | December 4, 2017 at 5:06 pm

There should be a competence test, as well.

Three of those judges couldn’t pass it.

Perhaps an annual test on the Constitution as well. The passing grade must be a minimum of 80%.

there needs to be mental and physical health certifications

Unfortunately such a requirement would give physicians far too much control over the government.

Physicians like the ones in the VA hospital system.

Merely a speedbump for the leftist judges on Route Do As I Please.

B. Hussein Obama’s classmate and judge in Hawaii won’t like this.

This is simply superior court smack-down of subordinate courts.

The SCOTUS issued a pretty clear ruling on the previous EOs, the inference being that it wished the status quo to be maintained until they could hear the case or it disappeared. Of course, the lower courts thumbed their noses at the SCOTUS and did not do that. So, the SCOTUS subtly slapped them down the first time. When the previous EOs expired, as expected, when the Administration issued the 3rd EO, the SCOTUS saw a way out of having to make a decision and the political results they would have to deal with and declared the case moot. Then the lower courts, proving themselves to be all-day dumb, issued new injunctions, without consulting the SCOTUS. The SCOTUS knows, as well as anyone, that as States are involved, it is the court of original jurisdiction and will eventually have to hear this case. It also knows that the 3rd EO addresses all the potential legal problems with the previous EOs. And, it knows that it is going to have to uphold the authority of the President to issue such an EO and rule the EO to be lawful. And, it all but told the lower courts that. But, the lower courts refused to listen. So, the SCOTUS played Daddy and just slapped them down. This gives the court a little time for people to get used to the idea that the Administration is going to win this one.

What’s concerning is how 2 justices didn’t agree with the other 5.

Just goes to show how important it is to have justices that respect the law or who are capable of thinking for themselves.

The Judicial Code (28 U.S.C. 351 et seq ) on complaints and discipline of federal judges, for those that want a new hobby.

The district court judge went so far as to taunt Trump with references to kneeling and athletes. He clearly showed no concern for the controlling authority, made it up as he went, and used his position and authority to make a political statement against a politician he did not like.