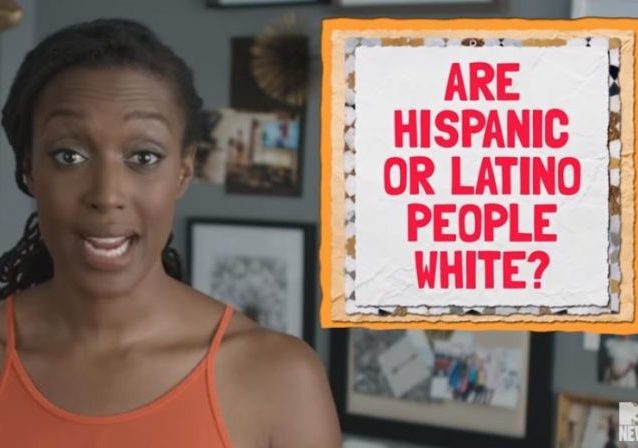 Demographics is everything to Democrat political strategy. It is taken as an article of faith that the growth of the Hispanic population as a distinct identity group will mean a coming inalterable Democrat advantage.

Today [October 2016], 54% of Latino registered voters say the Democratic Party has more concern for Latinos than the Republican Party, while 11% say the Republican Party has more concern – a 43-point difference. The Democratic advantage on this measure has remained relatively stable since 2012, when 61% of Latino voters said Democrats had more concern for Hispanics, compared with 10% who said the same of Republicans. At the same time, 28% of Latino registered voters today say there’s no difference between the two parties on this measure, a share that is relatively unchanged from 2012.

We’ve questioned this demographic destiny argument before, given high rates of intermarriage, particularly among Hispanics. Such increasing intermarriage is healthy for us as a society, but it’s not healthy for Democrats who play divide-and-conquer identity politics.

This skepticism about a demographic destiny is being questioned even from the left:

But if we look ahead 40 years, there’s a decent chance this Democratic majority never materializes. Ethnic identity is fluid—it shifts and changes with the circumstances of society. Right now, we think of Latinos and Asian Americans as separate from the white mainstream. But there’s no guarantee that will be true in the future. Indeed, if it isn’t, we could have a politics that looks similar to the one we have now.

What is the future of diversity politics after the 2016 election? Uncertain at best—and for a variety of reasons.

One, intermarriage and integration are still common. Overall, about 15 percent of all marriages each year are interracial, and the rates are highest for Asians and Latinos. Forty percent of Asian women marry men of another race—one quarter of African-American males do, as well—and over a quarter of all Latinos marry someone non-Latino.

Pew recently released a survey that further proves this point, Hispanic Identity Fades Across Generations as Immigrant Connections Fall Away:

More than 18% of Americans identify as Hispanic or Latino, the nation’s second largest racial or ethnic group. But two trends – a long-standing high intermarriage rate and a decade of declining Latin American immigration – are distancing some Americans with Hispanic ancestry from the life experiences of earlier generations, reducing the likelihood they call themselves Hispanic or Latino.

Among the estimated 42.7 million U.S. adults with Hispanic ancestry in 2015, nine-in-ten (89%), or about 37.8 million, self-identify as Hispanic or Latino. But another 5 million (11%) do not consider themselves Hispanic or Latino, according to Pew Research Center estimates….

As a result, even estimates of the number of Americans who self-identify as Hispanic could be lower than currently projected.

There are many other arguments as to why Democrats’ “demography is destiny” argument doesn’t hold up.

But intermarriage and fading self-identification across generations — which are good for America — definitely are a threat to the Democrats’ hoped-for demographic destiny.

Given that the new Dem litmus test for running requires proper open borders position (in addition to abortion and others), I think many party operatives realize they need a fresh influx for the voting to work to their favor. And it partly explains their obsession with painting every Republican as racist. First time voters take longer to realize the truth, perhaps.

Anglo-Latino inter-marriage is common enough that many people don’t recognize it when they see it. And yes, mixed race marriages overall are much more common today. Certainly in urban areas one doesn’t think twice when one sees a young mixed-race couple.

It’s going to be harder and harder for progressive intersectionality to work in these circumstances, but no doubt they’ll find a way to do it.

When everyone is brown, everyone will be white.

Right now I identify as a Freezing-American, wondering where is the global warming I was promised. I would like some of that right now, please.

Feels darn cold to me…

Is this the Hispanic tidal wave that fails to materialize every year? As a group they will always vote democrat. My father, a successful middle-class businessman votes straight democrat as do my siblings. They barely speak Spanish but are hard left democrats.

Me and my kids do not vote democrat but my siblings kids outnumber me and mine and are harder left than their grandfather.

Most every Hispanic I know legal and illegal vote democrat. This sounds exactly like every article the Hispanic activists put out every election cycle.

Build the wall or keep whistling past the graveyard.

Hispanics are a mix of Europeans (Spanish) and Native Americans, so no real surprise.

Plus, they are Christians for the most part, so no obstacle there.

Curious how many generations for Blacks to assimilate. If ever.

Biggest problem though is Islam – religion, particularly theirs considering that it exists for the sole purpose of conquering all others – are the biggest obstacle to assimilation.

Curious how many generations for Blacks to assimilate. If ever.

Good grief. Not sure if you are just looking for reaction in the usual internet sense or are really mean it. Either way, it’s pitiful.

I don’t think that “assimilate” comment is as crazy as you think it is. African-Americans were here, of course, before the Civil Rights era, but not here in terms of full legal participation in all aspects of American life. So thinking of them as recent immigrants who should fully integrate by the third generation, like Irish, Italians, and so on, isn’t nuts. And except for the radical hate-white activists, we see it happening. When I was a young girl, I never would have seen blacks in all the places I do now, as employees, customers, managers, and residents everywhere. It’s no longer unusual, happily.

You are making a distinction between legal prohibition and the will of a people to integrate into the society into which they were born?

The usual points of assimilation are still met: language, participation in the predominant religion (some say at a higher rate than most any other group), participation in most every cultural institution (sports in particular but most all others), etc.

Since legal prohibitions have been remedied, participation in local and national politics is also pretty high.

And the original poster implied that blacks are STILL not assimilated. That is just pure bigotry at the least.

It is interesting to consider how African immigrants are doing wrt assimilation. From the few data points I have seen (college graduation rates, average income) they are becoming a model immigrant group–too busy getting ahead to play the victim game. Which indicates that the group you are referring to is more cultural than racial.

BTW, the usual suspects have recognized this phenomena:

Identity politics, including diversity, are euphemisms for a progressive form of prejudice (PP). The principle they are searching for is “judge a person by the content of their character”. The Pro-Choice (i.e. selective, opportunistic, exclusive) religious/moral/etc. philosophy is the wrong choice.

Again, all the left has is the politics of envy and identity! Strip that away and they actually have nothing!

They are fortunate the media covers for them.

The media doesnt merely cover for them -the media is in business with them, and likely their actual employers.

Identity Politics is Evil. The perpetrators divide Americans into tribal groups and then forment envy, resentment and hatred towards the new “jew” to promote themselves.

This is wrong and should not be tolerated.

I say the same thing about jelly donuts. Irrelevant.

So long as jelly donuts appeal to people they will continue to be bought in mass quantities.

I’m not saying it’s bad, but why do you say intermarriage is good for America? I don’t really see the benefit. Me thinks people should be marrying the member of the opposite sex that they choose to. I don’t see how marrying someone who is another color is a benefit to society.

How about we marry those we want to marry .

Latinos can be a new conservative element as members move into higher socio economic levels . They are generally religious and conservative in nature . Once the identity politics wear off , there could be very goop prospects of pulling off enough to maintain an equilibrium .

A relatively little-known fact is that we Jews were not considered members of the white race in America until roughly the post-World-War Two era. Prior to that, we were classified as a race unto ourselves. A good example of ethnic fluidity.

Thus, “no Jews or dogs” was a sign of the times.

I thought that was “No Irish, No Blacks, No Dogs”? But I suppose bigotry is always flexible.

I’m a White Male and I get treated like the enemy here in California. I tried to use the County freebie medical system, got referred to a skin-care doctor but the Mexican young females that man the phone simply hung up on me when I spoke English.

–> Maybe the big lesson from 2016 is that a solid number of Latinos are conservative, and they will consistently vote for Republicans. Roughly 30 percent of Hispanics chose a Republican candidate in each of the last three election cycles. <–

Latinos Will Never Vote For A Republican, And Other Myths About Hispanics From 2016
https://www.npr.org/2016/12/22/506347254/latinos-will-never-vote-for-a-republican-and-other-myths-about-hispanics-from-20

Are Hispanic or Latino people white?

Hispanic refers to ethnicity, Latino to geographical origin. Hispanics and Latinos can be white, black, Native, Asian, or a mix.

This is what I think, and I have a bunch of friends who agree.

I do NOT “identify” as Hispanic or Latino, at least not as far as these people are concerned.

As far as THEY are concerned, I identify myself as AMERICAN.
Anything and everything else is none of their darn business, and as long as they continue to label and segregate me and my family, as long as they see me as a color, they will never get anything from me other that the middle finger.

You’re not conforming. That’s not good. Re-education camp for you!

This whole Hispanic culture definition is stupid. It was developed to give power to immigrants from south of the Continental United States, many of whom are illegally in this country. And, it based almost solely upon a person’s ability to speak Spanish.

In real life, people who come from Spanish speaking countries do not self-identify as Hispanic. They identify as Cuban, Mexican, Guatemalan, Puerto Rican, Spanish [those from Espania] and they do not appreciate being lumped in with other Spanish speaking immigrants, until it become advantageous to them.

And, why should people, who speak Spanish, be anymore of a privileged minority than those who come from a background in s French speaking country [including France] or one that speaks Hungarian or Italian? This is simply identity politics fostered to provide a political advantage to a specific political party and ideology.

“Irrelevant. As long as it appeals to them they will keep buying it”

If it’s irrelevant it’s only because we allowed defining it as evil o be be irrelevant. We permitted it to be mainstreamed, it’s key terrain in the culture war that the Right surrendered.

George Will once said “no one ever died from reading Der Sturmer, but he culture it served caused 6 million Jews to drop dead”.

6 million+ dead because when the Nazis demonized Jews and scapegoated them as the cause of everyone’s misfortune, people like you and me Shrugged it off that Evil as irrelevant.

Those who engage in identity politics should be shunned and run out of town. They should be regarded with the same contempt we show rapists and pedophiles. Instead, we have not onlt tolerated them, we have allowed them to spread their evil in our universities.

It’s no coincidence that the BDS movement originates from the same crowd. It’s the same strain of sin.