Protesters Continue to Demand an End to Iran’s Oppressive Regime

Protesters Continue to Demand an End to Iran’s Oppressive Regime 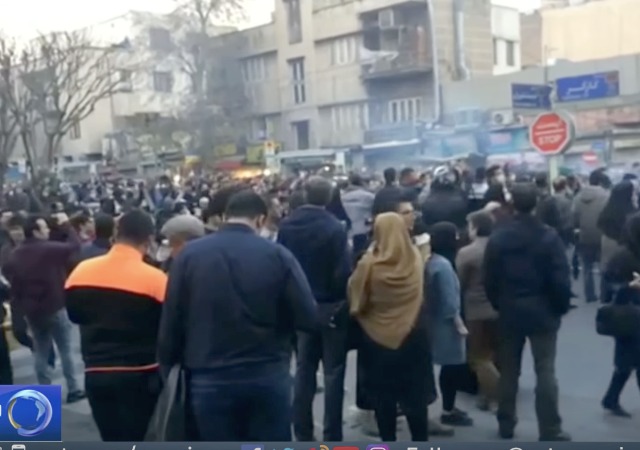 Protests have grown strong in Iran these past three days, reminiscent of the 2009 Green Movement, as people have grown tired of the ruling regime’s oppression. From The Wall Street Journal:

Antigovernment demonstrations broke out for a third day across Iran on Saturday, extending some of the country’s most widespread street protests in nearly a decade, with protesters demanding an end to the Islamic Republic regime and the rule of Supreme Leader Ayatollah Ali Khamenei.

Video shot from inside Iran and shared with The Wall Street Journal suggest large rallies at dozens of cities across the country.

The protesters seen in those videos bypassed calls for reform and branded both the reformist and hard-line factions of the government as outdated and needing to be replaced.

Working class and labor unions joined the middle class and student activists in dozens of cities and small towns from Tehran to Ahvaz and Qom, a key regime’s religious stronghold. In the videos shared with the Journal, protesters were seen chanting “Death to Khamenei,” and “We don’t want the Islamic Republic, we don’t want it” and “Reformist and hard-liners, you are both done.”

The regime has tried to deflect blame on foreign powers and anti-revolutionaries for the protests, but WSJ points out that these are just young college students. These protests have plenty of those in the working-class “that traditionally comprise the Islamic Republic’s power base,” which will make it harder for the regime’s excuse to stick.

It’s hard to confirm anything since the protests continue to unfold on social media. But the BBC reported that the protests “do not appear to be taking place on a massive scale” since the amount of people taking part in the “range from hundreds in some places to thousands in others.”

In the capital, at one point more than 100 people were seen gathered outside the gates of Tehran University and chanting slogans including, “Leave Gaza, leave Lebanon, my life for Iran,” a critique of spending on Iranian proxies abroad, and “Death to the dictator!” Video distributed on social media showed hundreds of young people at the university shouting slogans against Mr. Khamenei, as security forces stood by.

A few hundred riot police were deployed on nearby roads and blocked access to the university’s main gates. Plainclothes police were seen arresting one man near the Tehran University protests Saturday, although it wasn’t clear if he had taken part in the demonstrations. Police attempted to disperse the crowd using loudspeakers.

There were reports on social media and from Iranian dissidents about protests in other cities, including Kermanshah in the west and Isfahan in central Iran. The video couldn’t be independently verified, and it was difficult to ascertain how large the protests were.

Security forces were dispatched in other cities to disperse crowds and were seen on video using tear gas and batons, but the crackdowns appeared restrained compared with previous uprisings.

Voice of America (VOA) has reported that two people have died in the protests. The outlet stated that it’s “Persian service identified the victims as Hamzeh Lashni and Hossein Reshno.” A reporter from the outlet spoke with both families.

President Donald Trump and Vice President Mike Pence have shown support for those protesting against the Islamic regime:

Many reports of peaceful protests by Iranian citizens fed up with regime’s corruption & its squandering of the nation’s wealth to fund terrorism abroad. Iranian govt should respect their people’s rights, including right to express themselves. The world is watching! #IranProtests

The entire world understands that the good people of Iran want change, and, other than the vast military power of the United States, that Iran’s people are what their leaders fear the most…. pic.twitter.com/W8rKN9B6RT

Oppressive regimes cannot endure forever, and the day will come when the Iranian people will face a choice. The world is watching! pic.twitter.com/kvv1uAqcZ9

.@POTUS & I stand w/ peaceful protestors in Iran who are speaking out for freedom & we condemn the arrests of innocents. The time has come for the regime in Tehran to end terrorist activities, corruption, & their disregard for human rights. #IranProtests https://t.co/PcZMk07RcB

As I stated above, the story really comes to life on social media since there is no free press in Iran and the state media is fudging details. In fact, AFP wrote that state news channel IRINN does not have permission to cover the protests.

“The mullahs must be killed” “Shame on the Supreme Leader, leave our country alone” “Death to the dictator” – chants on the streets of #Iran‘s capital Tehran today on Day 3 of #IranProtests. via the MEK’s activists. It’s clear Iranian ppl want #RegimeChange. #FreeIran pic.twitter.com/gtVlSoxyrR

WATCH: Defiant youths in Mashhad overturn police car. via the MEK network. Today is Day 3 of nationwide #IranProtests calling for regime change in #Iran. Our nation seeks an end to the mullahs’ rule. #FreeIran pic.twitter.com/Jyj1QbRTT7

Anti-regime protesters in Arak (central #Iran) attack paramilitary Bassij center amid chants of “Death to Khamenei” on Day 3 of nationwide #IranProtests for a #FreeIran. via MEK activists. #No2Rouhani pic.twitter.com/GoLWL4Rkei

If you watch the videos of the protests the people are chanting against the mullahs & the Islamic republic. They’re chanting death to Rouhani. You can be imprisoned/killed in Iran for such dissidence. https://t.co/e5B3tosd4P

A protester in #Iran burns an Iranian flag. This is the version of the flag with the word “Allah” on it which was added to flag after the Islamic Revolution of 1979. #IranProtests #تظاهرات_سراسرى #يحدث_الان_في_ايران #متحد_شویم #IranProtest pic.twitter.com/UCeASRO05w

Remember, before the 1979 revolution, Iran sort of mirrored the West. But after the revolution, Sharia law took over, which included females wearing hijabs and remaining covered. Some on Twitter shared pictures of females pre-revolution:

Any government ruled by religious clerics is a tarnished and corrupt government.. Iran 1970#Iranprotests pic.twitter.com/TZkdzqf8xW

This is my mum & her friends in Iran before the Islamic revolution. All were professional, independent & free women. pic.twitter.com/4l69RnOmuZ

Me before & after the Islamic Revolution in Iran. Had to wear the veil once I started school. Hated it with a burning passion. pic.twitter.com/QUgSmwbB2A

For those asking my mum is third from the left in the group pic. She was quite the glamour. This was taken in Tehran during early 70s. #PersianPrincess pic.twitter.com/eMKciHmgs1

Courage personified. It’s heroic to protest in an Islamic republic where dissidence can be punished by imprisonment, torture & even death. There are reports that protesters have been shot during #IranProtests. pic.twitter.com/PUZzDMrx9j

Best of luck to them!

Unless the military agrees with the protesters, or stands aside, the outcome will be nothing but bad news.

The future of the middle east is tied to money. Everything always comes down to money.

Violent Islam is running out.

Imagine where the Iranian people could be today if the Obama regime had provided support to their protests in 2009. Imagine the lives that could have been saved in Iraq and Syria over the past 8 years if the mullahs had fallen in 2009.

even now Zero has NOT shown support for the protestors (even Pantysuit has).

More importantly, what about the white panel truck parked at Trump’s golf course?

DUBAI, United Arab Emirates (AP) — A Sunni jihadist group has claimed to have blown up an oil pipeline in Iran’s southern Khuzestan province, the scene of other attacks by Arab separatists. Iranian authorities have not acknowledged any such attack.

An online video posted by Ansar al-Furqan claimed the attack and showed what it described as a pipeline near Omidiyeh.

The U.S.-based SITE Intelligence Group quoted the video on Saturday as saying: “This operation was conducted to inflict losses on the economy of criminal Iranian regime.”

SITE says the attack by Ansar al-Furqan, if confirmed, would be their first in oil-rich southern Iran.

Iran has faced low-level separatist unrest from Kurds in its northwest, the Baluch in its east and Arabs in its south since the 1979 Islamic Revolution

Yet another example of Obama being on the wrong side of history…of course completely ignored by the propaganda arm of the Democrat Party the MFM.

Reuters showed a picture of Netanyahu in the story of the dead protesters. Reuters was implying that Jews were behind the uprising. Clearly Reuters is cheering for the theocracy.