“It grieves me to learn that I caused any of my clerks to feel uncomfortable; this was never my intent.” 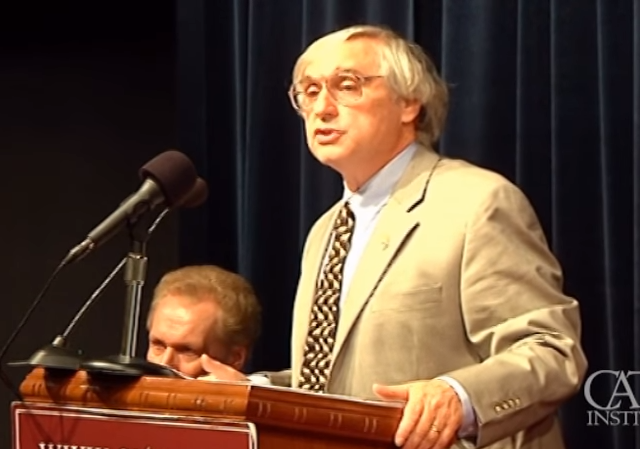 Alex Kozinski was perhaps the most well-known member of the 9th Circuit Court of Appeals and was its former Chief Judge.

It’s hard to characterize Judge Kozinski in terms of the political conservative/liberal split. He was nominated by Ronald Reagan, but because he was on the 9th Circuit, popular opinion tends to treat him as a liberal. Libertarian probably is a better descriptor, and he was known as a defender of individual rights:

Judge Kozinski was critical of 9th Circuit decisions that were so extreme they invited reversal from the Supreme Court (which happened frequently). He joined the dissent in the 9th Circuit decision refusing to hear en banc a panel decision enjoining Trump’s first travel order:

As tempting as it is to use the judicial power to balance those competing interests as we see fit, we cannot let our personal inclinations get ahead of important, overarching principles about who gets to make decisions in our democracy. For better or worse, every four years we hold a contested presidential election. We have all found ourselves disappointed with the election results in one election cycle or another. But it is the best of American traditions that we also understand and respect the consequences of our elections. Even when we disagree with the judgment of the political branches—and perhaps especially when we disagree — we have to trust that the wisdom of the nation as a whole will prevail in the end.

He was a huge personality, and famous for appearing on The Dating Game before he joined the bench.

Alex Kozinski, a prominent voice on the U.S. 9th Circuit Court of Appeals, said Monday he was retiring immediately in the face of more than a dozen reports of sexual misconduct.

Kozinski, who served more than three decades on the appeals court, faced allegations that he showed clerks pornography, improperly touched women and kept a chart of his college sexual conquests.

The brash, outspoken judge was strong presence on the court. He espoused quirky positions and a sense of humor that delighted some but that in the end he said contributed to his downfall….

He said in a prepared statement that he was retiring because he could no longer be an effective judge.Two of his four law clerks resigned last week as reports of his misbehavior escalated on the Internet….

“I cannot be an effective judge and simultaneously fight this battle,” Kozinski said in a statement distributed by the 9th Circuit. “Nor would such a battle be good for my beloved federal judiciary.”

What once was treated as a joke, now is a firing offense. He couldn’t be fired, as he had life tenure, but he clearly did not want to go through what staying on the bench would have meant. Here is his full statement (pdf.):

It has been an unparalleled honor to serve as a federal judge for more than thirty-five years. I firmly believe that a strong judiciary, free from political pressures, is vital to the preservation of this great nation. I found in this country, and in my work, opportunities and satisfaction that I never thought imaginable when I arrived here, at the age of 12, a refugee from Communism. I am grateful to my colleagues with whom I have had the privilege of serving, and to the countless hard-working lawyers who have appeared before me. I have learned so much from them all and will be forever grateful for their professionalism, intellectual rigor, and in many instances their steadfast friendship.

It has also been my privilege to help train the best and the brightest of several generations of new attorneys. I was made better by working with them. My clerks went on to stellar careers in law, business and academics. Their success has made me proud and I am gratified by the outpouring of support I have received privately from so many of them.

Still, I’ve always had a broad sense of humor and a candid way of speaking to both male and female law clerks alike. In doing so, I may not have been mindful enough of the special challenges and pressures that women face in the workplace. It grieves me to learn that I caused any of my clerks to feel uncomfortable; this was never my intent.

For this I sincerely apologize.

A couple of years ago, as I reached the age when several of my colleagues had decided to take senior status or retire, I began considering whether the time had come for me to move on as well. Family and friends have urged me to stay on, at least long enough to defend myself. But I cannot be an effective judge and simultaneously fight this battle. Nor would such a battle be good for my beloved federal judiciary. And so I am making the decision to retire, effective immediately.

What this means, in the short term, is that there is an additional immediate vacancy for Trump to fill on the notoriously liberal 9th Circuit, adding to 4 current vacancies:

With one prior nomination, plus now 5 vacancies, Trump has the possibility of making a dent in the 9th Circuit liberalism, but only a dent. The Court has 29 appeals court judgeships. But it’s a start.

Dems can’t keep their members from getting out of line LOL –
pr is it staying at attention ?

Kozinsky is no Democrat

He was appointed by Ronald Reagan

has he decided anything to the benefit of conservatives and strict adherence to the constitution ?

Yes, all the time, you dolt. This is a blow to any lover of liberty. And it’s a victory to those who crave the power to unilaterally and retroactively change the rules by which people are expected to conduct themselves.

I don’t up-vote Millhouse often, but he’s right and you’re wrong on this. Kozinski drove a wooden spike through the heart of junk science in the courtroom with his decision on Daubert v. Merrill Dow. You should read it before jumping to conclusions. He may have been trapped in the Ninth Circus, but he was NOT a liberal.

No sane person would leave their kids alone in a room with Al Franken, but Kozinski isn’t like that at all. I met Kozinski. He is a decent person. We are all poorer for losing his voice on the 9th circuit.

doesn’t this give DJT a chance to nominate a conservative ?

Anyone Trump places on the 9th Circuit will be treated like a skunk at a picnic. So it take a brave person to begin the process of bringing that circuit to heel.

Actually, I think this is a good time for Pres Trump to announce that the 9th Court will be broken up into two or three Appeals Courts, then thank the current justices and proceed to nominate justices to his revised courts.

sorry i did not read this post completely but had he stayed on he would have only been pointed at as the (D) are not the only ones to act juvenile.

OH NO!! Another man who watches pornography and asks women what they are wearing when he speaks with them on the telephone. The horror. If only he had stolen or misappropriated public money, cheated on his taxes, had multiple illicit affairs or left a young woman to drown in a submerged automobile. We could live with that. But, years or decades old alleged incidents of questionable behavior, which were never brought to anyone’s attention are unforgivable.

If being a saint is now a requirement for public office, then there will be no public officials left by Christmas.

The best thing that Trump could do is revise the boundaries and territory of the Ninth, by keeping it solely in CA. Then put OR, WA, and HI together in a circuit. And perhaps expand the 10th Circuit to absorb MT, ID, AZ, and NV or just create another circuit. Each expanded or new circuit means Trump would appoint the judges and simultaneously limit liberal judges to control smaller land mass and population.

As it stands today, Trump has the ability to raise the number of judges in the 9th to 12 non-crazies of 29 total. An imbalance of 17-12 still works against the sane people within the 9th circuit.

I’m pretty sure Congress is the body that would have to make that change – Trump would have the opportunity to sign the bill, of course.

Trump has the ability to draft legislation, use his big mouth and bully pulpit as the party leader to promote it, twist arms to secure the votes, and get Congress to pass it.

I wonder if her ever “got lucky” with those primitive ploys. There is a good reason why prostitution ought not be prohibited. Even guys lacking in social skills can take some pleasure, from time-to-time. Just consider what it must be like to be Al-Gore? that pathetic man-bear-pig couldn’t get lucky at The Mustang Ranch using Dan Rather’s debit card!

There’s no reason to suppose he was looking to “get lucky”. He’s a happily married man. He was just engaging in what used to be considered normal office talk, and did his female clerks the courtesy of taking them at their word when they insisted they should be treated the same as the male ones.

After the Swamp Sessions debacle, count on The Donald to employ only warriors.

I thought that I’d be tired of all of the winning but I love it even more today…….. LOL! MAGA!!!

Sorry to see Kozinski go. He has come down hard on the out of control prosecutors in California.

Gee, another non-progressive being targeted with likely false accusations of misconduct decades after the fact. After taking down Moore I predicted this tactic would escalate.