“To President Trump and the United States government, thank you” 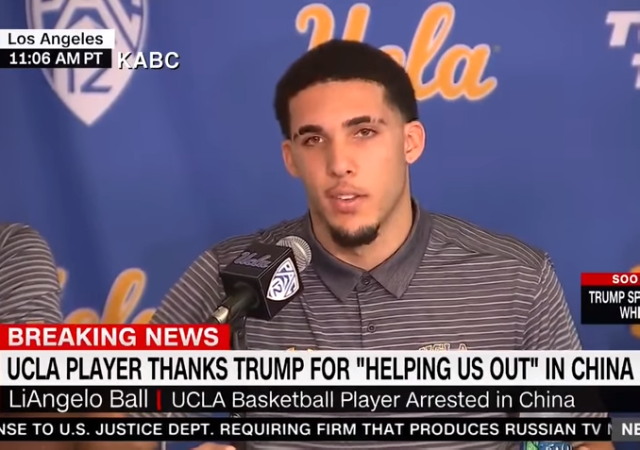 Three young men who play basketball for UCLA were on a team visit to China earlier this month when they were arrested for shoplifting. President Trump happened to be landing in China at the same time and intervened on their behalf.

President Trump found out about the great U.C.L.A.-China basketball episode of 2017 when members of his staff saw it on CNN just before Mr. Trump’s dinner with the president of China in Beijing last week.

They learned that three American college basketball players — representing a storied sports program visiting China for an early-season game sponsored by one of China’s largest companies — had been arrested on Nov. 8, accused of stealing designer sunglasses at a high-end shopping mall.

The alleged offense was hardly life or death. But what begun as a simple accusation of celebrity shoplifting threatened to escalate into a full-blown international incident just as Mr. Trump arrived in China on a 12-day mission through Asia, his first foreign trip to the region.

“These are law and order guys; they have pretty swift justice,” John Kelly, the president’s chief of staff, said of the Chinese authorities in a telephone interview later. “An awful lot of American kids don’t realize that the kinds of things that in United States society we tolerate with a slap on the wrist, a lot of countries they take very seriously.”

In other cases, detained Americans have become geopolitical pawns, often trapped in a kind of legal limbo for months or years.

And in a few instances, the outcome has been horrific, as in the case of Otto Warmbier, an American student in North Korea who was tortured and later died after being detained on charges that he tried to steal a poster from his hotel.

But just as concern deepened about the fate of the three young athletes in China, their detention abruptly ended, aided, it seems, by Mr. Trump’s direct intervention with the country’s president, Xi Jinping.

In typical Trump fashion, he tweeted about the incident:

Do you think the three UCLA Basketball Players will say thank you President Trump? They were headed for 10 years in jail!

Yesterday at a press conference, the players thanked Trump and others. The Washington Free Beacon reports:

The players each spoke in turn, all stating they regretted their actions and apologizing. Riley sighed deeply after mentioning Trump.

“To President Trump and the United States government, thank you for taking the time to intervene on our behalf. We really appreciate you helping us out,” he said before sighing.

Ball said he had exercised poor judgment and said he had been raised better than his actions showed.

“I would also like to thank President Trump and the United States government for the help that they provided as well,” Ball said.

These students are right to thank Trump. They could have languished in a Chinese jail for years if it wasn’t for his intervention.

I assert that this is another masterful troll-tweet by President Trump. After near radio-silence from the American press on his Asian trip, and his work to release these 3 from Chinese jail, BOOM…top-of-the-fold news. I will also point out Trump got these 3 out without a prisoner exchange or billions airlifted out of our treasury.

All well and good. But it’s still important to administer justice.

And 94Corvette is correct: the AD at UCLA has a decision to make, and he should make it without too much delay.

The Chinese legal system does NOTHING quickly. These guys were looking a months and months just awaiting indictments.

notamemberofanyorganizedpolicital in reply to Leslie Eastman. | November 16, 2017 at 1:22 pm

President Trump – the Great One (Oh how Tweet It is!)
“Do you think the three UCLA Basketball Players will say thank you President Trump? They were headed for 10 years in jail!”

They only thanked Trump because he goaded them. As to any “regret” for their thievery I have my doubts. Had I been DJT I would have talked with the Chinese (before I left their country) to agree to let them go, but only they had gotten a real taste of a few weeks of non-American wrist-slap justice.

Not for a moment do I think they’ve learned any moral lessons.

I beggars belief that these three idiots felt so entitled as to carry on the way they did while on an all expenses paid junket to China!

There is a very real opportunity there for these three to actually learn from this event. Its entirely up to them whether they DO learn something or whether they carry on like this through the rest of their lives, in which case I doubt those lives will be particularly long or productive.

notamemberofanyorganizedpolicital in reply to mailman. | November 16, 2017 at 1:29 pm

Brainwashed, yes, but educated? NO!

Has the AD at UCLA decided how the university is going to address this? For me, this is a no brainer, these three should be stripped of their scholarships, kicked off the team and expelled from college. Their actions show a lack of integrity and character that unless addressed will continue to ruin their lives and the lives of those around them.

i don’t believe for a minute that his was the first time the five finger discount was done by these yoots.

Remember that American kid who got caught doing graffiti or shoplifting in Singapore? They caned his stupid American butt as they should have. While I’m glad this didn’t turn into an incident wherein money or prisoners was transferred, these idiots need to learn a little harder lesson that just kissing Trump’s butt. I don’t want foreigners breaking that law here in my hometown just as they shouldn’t be doing that overseas either.

Remember that American kid who got caught doing graffiti or shoplifting in Singapore?

Michael Fay and his friends spray-painted 18 cars (though he only pleaded guilty to two), threw eggs at cars, and stole 16 road signs.

I watched one of the player’s responses to his ordeal and it was disgusting. He thanked everyone from his coach and teammates to the school and as an afterthought added, “I would like to thank president Trump AS WELL”! As well? He was the only one who did anything except Xi Jinping who had to have approved the release. UCLA should immediately eject them not suspend them. They are the worst of the worst to knowingly disgrace their country and school in a foreign country while their president is visiting that country! Think of what the Chinese public must think of us and our integrity?

They certainly aren’t helping the progress that Trump is making. UCLA should definitely expel them. Can you imagine if some German kids stole from your business and Angela Merkel asked Trump to release them. I’d be livid in my president, governor, mayor or local PD gave in to her.

Let’s start a call
UCLA protest to remove the players from not only the team
But the school..

puhleeze, playahs of color to be disciplined ?

they got basketball ‘scholarships’ not academic ones –
if it were up to me, let the pro teams pay for a program to pay for bringing new players on their teams.

at one time sports was an avocation not a vocation.

from the time these yoots showed ability in sports, they have been coddled with an entitlement mentality.

these yoots need to show a GPA of at least 2.5 and NOT in ‘studies’ of any kind like basketweaving!

Cam Newton was kicked out of Florida for stealing computers and went to Auburn. He is now a QB for the Panthers. Black football players or BB players do not get disciplined if they have a future.

The Hillary Clinton’s of basketball

The gratefulness was a tad…. forced. …read off a card.. to the point of insincerity. But they said it. Now let them feel it. That the NCAA kicked the can to UCLA to handle sanctions is odd to me, but ok. We’ll see if UCLA has any adults in charge.

“These students are right to thank Trump. They could have languished in a Chinese jail for years if it wasn’t for his intervention.”

I seriously doubt this. The Chinese are nuts about basketball and revel in having US teams visit. A few threats to end cooperation from the NCAA or NBA would also have brought quick resolution.

2 queries: LiAngelo … ??? WTF kind of a name is this in America???? And what is it with the shaved slots in the eyebrows? This is black culture? The more you act like whites, the more you will be accepted. And why can’t you get adult haircuts?

“And in a few instances, the outcome has been horrific, as in the case of Otto Warmbier, an American student in North Korea who was tortured and later died after being detained on charges that he tried to steal a poster from his hotel.”

The whole case against Warmbier was manufactured from beginning to end. The naivete surrounding it is nauseating. We all know the confession was coerced. Yet there are still people stupid enough to look at that grainy NORK video of somebody taking a poster off a wall and just take the Kim regime’s word that the unidentifiable individual in that video is Warmbier. Because the NORK’s say it is.

The NORKs still apply the NKVD’s standard of justice as it was done under Lavrenty Beria. As he told Stalin:

1. If you want someone to be guilty I’ll manufacture the evidence.

2. If you want someone to be innocent there will be no evidence. Or, alternatively, no amount of evidence will be enough to do the job.

The second sentence is in tribute to Comey’s charge sheet against Hillary Clinton. Where no amount of evidence would get the job done. I guess Comey and Beria are soul mates, too.

Should have left them to the mercy of the Chinese justice system.

“…The alleged offense was hardly life or death. But what begun as a simple accusation of celebrity shoplifting threatened to escalate into a full-blown international incident just as Mr. Trump arrived in China on a 12-day mission through Asia, his first foreign trip to the region…”

The NYT attempts to downplay this, and it just underscores their partisan stupidity. Not life or death? Just how long does anyone think three pampered Americans would survive in a CHICOM prison? Yeah, it’s life or death.

And then the author of this bit of stupidity then goes on to downplay the whole thing as “a simple accusation of celebrity shoplifting.”

That’s exactly what the three b-ball players thought. “It’s no big deal.” It is to the Chinese.

But that would make me and a couple of billion Chinese screaming racists. I wonder if these three can sue the PRC for racially profiling them in the Louis Vitton store?

We’re missing the most important news tidbit of this story: How many UCLA students will now feel unsafe because their basketball team had to mention Trump in a positive light?

The NCAA got so mad T Ucla – they put Unlv on probation .