U. Oregon Students Object to Punishment for Shutting Down President’s Speech

U. Oregon Students Object to Punishment for Shutting Down President’s Speech 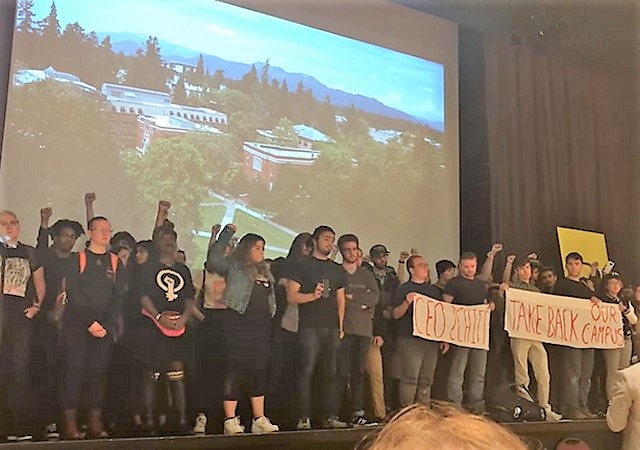 Remember last month when University of Oregon students shut down a speech by their school president? They’re angry that they are being held accountable.

Oregon Students Demand Not to Be Punished

University of Oregon (UO) student protesters who were offered a choice between pardon and punishment for violating the student code by shouting down the university president last month responded Monday by demanding the administration “cease the punitive measures.”

In the open letter, UO President Michael Schill and the trustees were accused of having “potentially endangered” the student protesters, who brand themselves the “UO Student Collective,” by discussing the incident in the national media.

The dozens of students who rushed the stage where Schill was to give his State of the University address on Oct. 6 and chanted for some 15 minutes about student rights were termed a “minor protest” in the letter, which is signed by Chris Sinclair, president of the university senate; Imani Dorsey, the state affairs commissioner of the student government; Jessica Neafie, president of the Graduate Teaching Fellows Federation; and Michael Dreiling, president of United Academics, a collective bargaining group representing UO teaching and research faculty.

The letter said, “it is time [for the administration] to de-escalate” after exposing students to “national mockery.”

The letter’s specific complaints against the administration include “intimidation”; “investigatory errors”; “derailing due process”; “lack of just representation and counsel”; “anticipation of conflict, not engagement” prior to the event; “factual ambiguities” in how UO has discussed the incident; and “lack of oversight” by the Student Conduct and Community Standards Committee in bringing the misconduct charges.

B-b-b-but *sniffle* Mommy and Daddy never objected to any of my vigorous temper tantrums *whimper*.

Instead, I always got my way, whatever I wanted.

These students should review what Thoreau writes in “Civil Disobedience,” where he argues that accepting the consequences is an essential element of such acts.
Coming to that kind of understanding might require reading more than the SparkNotes, though.

This one is pretty hilarious.

They’re mad about admins talking to the press about it? Did you want your protest to be a big secret? That’s the first time I’ve ever heard someone say they didn’t want their protest to be discussed by the press.

Hey, Snewflakes, that’s not “intimidation” that is the Administration being the adult in the situation….which only leaves one part for the whiners to play…Yep, the unruly child!

What punishment is being protested?

As usual they are protesting any punishment, because as usual with leftist snewflakes it’s mean and racist and (add leftist tag word here) to make them take actual personal responsibility for their actions.