Resolution asks Regents to investigate whether to divest, effort is DOA according to University spokesman. 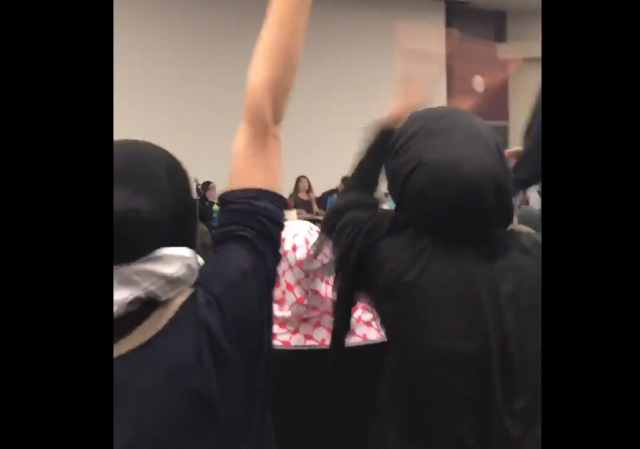 There was a time that student government resolutions divesting from Israel were all the rage, and the center of the anti-Israel movement on campuses. We covered many such battles, most of which were defeated, though some passed.

They always were purely symbolic acts, since student governments have zero power to divest university investments, and universities regularly reject such student resolutions.

But actual divestment never really was the purpose. The purpose was to usurp student government time and student newspaper coverage talking about how bad Israel supposedly is.

Over the years, however, such divestment resolutions have turned into something of a sideshow. A nasty, hateful sideshow for sure, but a sideshow.

At U. Michigan – Ann Arbor, though, it’s been more than a sideshow. It’s been an obsession, with 10 attempts to pass divestment failing.

But the 11th time was the charm early this morning. The resolution passed. But it wasn’t really a divestment resolution.

It was a request that the Regents appoint a committee to investigate whether to divest. Yes, seriously.

After the obligatory misleading anti-Israel “Whereas” clauses, the resolution demanded:

RESOLVED, that CSG calls upon the University of Michigan Regents to follow University precedent and appoint a committee, as stipulated above, to
investigate the ethical and moral implications of our investments in the
corporations Boeing, HP, and United Technologies, which are involved in
humans rights violations against the Palestinian people according to
international law33; AND BE IT FURTHER

RESOLVED, that CSG requests the University of Michigan asset managers to divest, if deemed appropriate by the ad hoc committee’s recommendations
following an investigation by that committee, as soon as such divestment
may be accomplished from all such companies that, within one year
from the date of engagement, remain uncommitted to a diligent plan to
terminate all such unethical business activities; AND BE IT FURTHER

RESOLVED, that CSG requests the University of Michigan asset managers investigate possible alternatives for investment such that the University’s assets and investment strategies are not harmed; AND BE IT FURTHER

RESOLVED, that upon passage of this resolution the request herein presented shall embody the University of Michigan’s deeply held principles of justice and equality for all people, and affirms that the Palestinian people are not exempt from these principles; AND BE IT FINALLY

RESOLVED, that a copy of this resolution be sent to the University of Michigan Board of Regents, in addition to the President’s Advisory Committee on Labor Standards and Human Rights, for their consideration and approval.

I listened to some of the argument on the live stream, and it was even worse, because the resolution was presented as not being part of the Boycott, Divestment and Sanctions movement, to make it more palatable.

The Michigan Daily reported on how the resolution was presented as not being anti-Israel in order to obtain passage:

Yara Gayar, LSA rep. and senior, responded, noting the resolution would not require direct action be taken by administration and the Board of Regents, but would instead create a committee to bring concerns to these administrative figures.

“This resolution is only calling for a committee to be created,” she said. “We’re not voting on divestment and we’re not making political claims about what side is at fault. We are just saying there are companies who are involved in human rights violations.”

The vote was held by secret ballot on the request of the student council members, who apparently feared being held personally accountable for their votes.

The meeting stretched nearly eight hours – the longest in student government history – before a vote was conducted under secret ballot, which was done after much debate to protect pro-Palestinian and divestment members from being subject to damaging online blacklists.

The resolution was passed to investigate divesting in Israel after 10 previous attempts since 2002. The vote tally was dramatically different than last year’s resolution, which was voted down 34-13.

The resolution, despite the celebrations from the backers, is dead on arrival:

In an emailed statement this morning, University of Michigan spokesperson Rick Fitzgerald indicated it is unlikely the Regents will create a committee to consider and divestment.

“The primary purpose of investments (through our endowment) is to generate the greatest possible income,” said Fitzgerald. “It is important that the university maintain an investment portfolio diversified across a full range of legally recognized entities. To do otherwise would be to increase our investment risk and decrease our investment returns.

“For this reason, the university’s longstanding policy is to shield the endowment from political pressures and to base our investment decisions solely on financial factors such as risk and return. This approach has been underscored consistently by university leaders, including the Board of Regents, most recently in December 2015. We do not anticipate a change in this approach or the creation of a committee,” Fitzgerald said.

There’s a good and a bad here. The “good” is that BDS appears to be so discredited that students needed to distance themselves in order to sell the resolution.

The “bad” is that while this was, in many ways, a charade, it still reflects the continuing demonization of Israel on campus.

A statement from the Pro-Israel StandWithUs noted in a press release after the vote how nasty the effort was:

“This campaign of hate has no place on campus”, said StandWithUs Midwest Campus Coordinator, Liora Bachrach. “I’m proud of the students who worked so hard to defeat divestment and stand up for a just peace, but deeply disappointed that their voices were disregarded by so many members of CSG.”

Like past campaigns at UM and elsewhere, dehumanizing hate speech against Jews and Israelis was used to promote the resolution. For example, an op-ed in the Michigan Daily compared Israel and those who support Jewish rights to self-determination to white supremacists.
“Equating a movement for Jewish liberation with one of the most anti-Semitic ideologies in existence is deeply racist,” said Max Samarov, Executive Director of Research & Campus Strategy at StandWithUs. “Instead of promoting unity against white supremacy, those who make such comparisons are fueling the fire with their own brand of hate.”

There will be more such resolutions in student governments, because the dead-enders got to dead-end.
More Sharing Options

I think that it’s high time to start a campus “Divest from “Submission,” project, encouraging universities to divest from investing in companies situated in, or, owned by, states that adhere to the supremacist, totalitarian, belligerent, spite-filled, anti-gay, anti-women, anti-secular, anti-Christian, anti-Jewish, anti-Hindu, anti-Buddhist, ideology of “Submission.”

My thoughts as I was reading the post were very similar.

This is what happens when you tell a bunch of kids how “special” and “smart” and “snowflaky” they are, and then don’t give them anything worthwhile to do.

This is more on-topic here:

This is what I’ve been predicting all along. Trump wants a deal, and eventually he would come to realize that only one side gives in to pressure, so he’d apply all the pressure to that side, and throw out every principle he ever pretended to champion.

Hijacking academic institutions to vilify Israel is analogous to the UN human rights agencies that have been hijacked for the same purpose. Pro Islamic students and academics are slowly and surely infiltrating campuses with the long term goal of shifting US policy away from a pro Israel stance. So far, it’s working, and manufacturing American snowflakes apace.

These BDS groups should have just marched with the neo-Nazis in Charlottesville. They all have the same hate-filled message aimed at destroying the only stable democracy in the middle east and eliminating the Jews. The only difference is that the BDS groups use left-wing language and the neo-Nazis use right-wing language. Both the far-left and far-right groups want to use fascist techniques to eliminate the same minority group.