“But if you don’t support net neutrality, I will find you and your family and I will kill … you … all. Do you understand?” 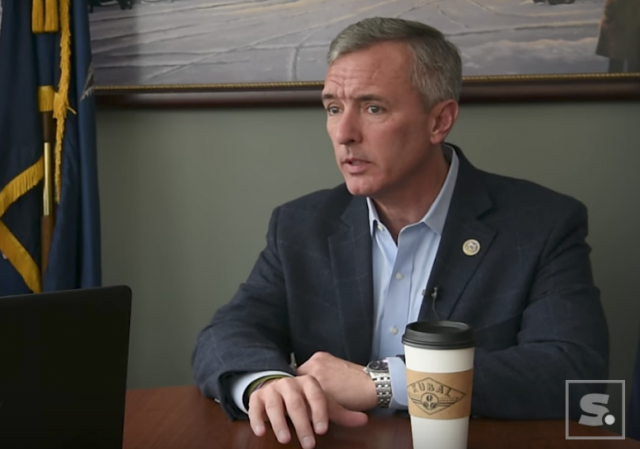 Patrick D. Angelo is super serious about net neutrality. So serious, he was arrested and charged with “interstate communication of a threat and threatening a federal official,” reports the Rochester Democrat and Chronicle.

Angelo left a threatening voicemail for Congressman John Katko’s, threatening to kill him and his family if Katko refused to support net neutrality.

According to the U.S. Attorney’s Office, Angelo allegedly called the Washington, D.C., office of Congressman John Katko, R-Camillus, on Oct. 17 and left a threatening voicemail that included a death threat to Katko and his family if the congressman didn’t support net neutrality.

Angelo made an initial appearance Wednesday afternoon in U.S. District Court. He is being held pending a detention hearing Friday.

Net neutrality is the idea that everyone with an internet connection should have equal access to video, music, email, photos, social networks, maps and other content, with some exceptions that allow internet service providers to block spam and child pornography.

Katko’s office reported the message to the United States Capitol Police Threat Assessment Section. The threat assessment team started a joint investigation with the Federal Bureau of Investigation. The message was traced back to Angelo’s telephone number, authorities said.

FCC Chairman Ajit Pai has also been the target of harassment over plans to dismantle the Obama era policy of net neutrality. Pai reached out to Rep. Katko after the incident:

FCC Chairman Ajit Pai said earlier this week that his own family has become the target of harassment over his proposal to dismantle net neutrality rules for internet providers set during the Obama administration.

On Thursday, Pai reached out to Katko, R-Camillus, and his family.

“I condemn in the strongest possible terms any attempts to intimidate government officials with violent threats, and in particular, efforts to target their families,” Pai said in a statement.

“I would also like to express my sympathy to Congressman Katko and his family and thank law enforcement officials for taking this matter seriously,” Pai said.

Protesters targeting Pai have left signs in front of his home in the Washington, D.C., suburbs, including one that said, “They will come to know the truth. Dad murdered Democracy in cold blood.”

I guess the Baseball commissioner is lucky he didn’t get a chance to complain about the Infield Fly Rule.

I really don’t understand the virulence of these crazy people with reference to “net neutrality.”

notamemberofanyorganizedpolicital in reply to tarheelkate. | November 30, 2017 at 9:11 pm

It’s because Obama’s “net neutrality” is everything but that.

Obama’s “net neutrality” allows Facebook, Google, YouTube, Twitter, etc. to abuse “We the People” just has they have been in the last 3 years since Obama’s Evil Net Destroying Bias Bill was passed. It allows them to “disappear” conservative web sites such as Legal Insurrection or Diamond and Silk, etc.

Obama’s “net neutering” bill as it really is was only intended to end free speech and leave the “internet” just another Democrat Party Propaganda Pipeline.

FCC Chairman Ajit Pai has clearly explained that doing away with Obama’s evil little action will simply return the internet to like it was for 20 years – before 3 years back.

It will open up the internet for competition and innovation from new businesses, instead of allowing the internet to be monopolized by the current likes of Facebook, Google, Amazon, etc.

Ajit Pai discusses why net neutrality is bad for the country.

“Pai asserted in a Tuesday speech that internet companies are “a much bigger actual threat to an open internet” because they choose what people see on their services.

He called out Twitter specifically, contending that it takes action — such as suspending accounts or removing their “verified” status — against conservatives more frequently than liberals. He didn’t specify who he was talking about, but Twitter this month “unverified” the account of white nationalist Richard Spencer .
….
“Pai also noted that Twitter had blocked Rep. Marsha Blackburn, R-Tenn., from advertising a campaign video, which he said was because it “featured a pro-life message.” Twitter said Tuesday that it didn’t censor her video but also doesn’t want to expose users to “potentially distressing” ads. Twitter later decided to let Blackburn advertise the video, in which she says that she “stopped the sale of baby body parts……

mrtomsr in reply to notamemberofanyorganizedpolicital. | December 1, 2017 at 7:05 am

They are insecure, arrogant, ignoramuses with very delicate egos who would rather sell out their nation (or apparently kill someone) than face their denial.

Alcoholics Anonymous says it best about these people:

“He can only be defeated by an attitude of intolerance or belligerent denial.”
http://www.164andmore.com/words/denial.htm

Without “net neutrality”, the high bandwidth, low jitter services people expect will cost their users more. Not to mention dampen the enthusiasm of investors and the bottom-line of low-capital, high gain corporations.

This is the catch-phrase, hot-button concept pushed in certain media, and if that’s all the information you have, your arguments are logical. However, here is a much more technical, deep, and nuanced explanation by a legal expert in the field – who, by the way, does not deny that he might be biased.

How so n.n? Why would companies invest their time, effort and money in to improving services IF they can’t control how those services are used?

Pai has it right, the far great threat to “net neutrality” comes from companies like Twitter and Facebook because, as he rightly highlights, they selective choose what people see and as we have seen they don’t want people to see conservative points of view.

I suppose that there is no doubt as to Angelo’s political leanings. Since they were carefully not mentioned, and the threat was against a Republican, and it was both tactically and factually Chiroptera feces crazy; he is a Leftist.

notamemberofanyorganizedpolicital in reply to stevewhitemd. | November 30, 2017 at 9:13 pm

I can “Name that Party” in one try!

notamemberofanyorganizedpolicital in reply to Subotai Bahadur. | November 30, 2017 at 9:14 pm

They are insecure, arrogant, ignoramuses with very delicate egos who would rather sell out their nation (or apparently kill someone) than face their denial.

Alcoholics Anonymous says it best about these people:

“He can only be defeated by an attitude of intolerance or belligerent denial.”
http://www.164andmore.com/words/denial.htm

“Net neutrality” is about priority when routing signals, or, if you prefer, data streams.

It’s hardly the stuff of which revolutions are made.

That’s the obvious … but when you declare internet access to be a Universal Service, it unleashes a bevy of other considerations.
https://www.fcc.gov/general/universal-service

The threats are inspired by “net neutrality”, not “universal service”.

Should we really be surprised when liberals constantly hyperventilate and frame issues as life or death that some/many will interpret such actions literally?

It ain’t just the left that’s gone nucking futz. This is a supposed republican, but a never Trumper who posted the following:

Trump tweeted the inflammatory vidios (he whacked the proverbial wasp’s nest). Blood will spill (on both sides). How tactical is this? How pragmatic is this? Answer: ZERO tactical and ZERO pragmatic. POTUS= HUGE dumb.

If it is ZERO practical and ZERO pragmatic, the only answer I can provide is that this frick’n jackass is off his rocker.

I, for one, irrespective of Trump’s ridiculous political hyperbole, want this gigantic nutcase nowhere near the nuclear briefcase. Could we, at the very least, agree up that? If not, we’re all doomed. This aint Hollywood, kids. Dr. Strangelove.

“Irrespective of obama’s ridiculous political hyperbole, want this gigantic nutcase nowhere near the nuclear briefcase. Could we, at the very least, agree up that? If not, we’re all doomed. This aint Hollywood, kids. Dr. Strangelove….”

Isn’t it special the way the Rochester repeats just the kind of disinformation that sends ignoramuses like Mr. Angelo around the bend:

“Net neutrality is the idea that everyone with an internet connection should have equal access to video, music, email, photos, social networks, maps and other content.”

What it really means is that if you build the internet infrastructure to bring bigger faster better internet to more people you don’t get to own it but must let everyone use it, which keeps anyone from building it, which is why our internet currently stinks compared to what is available eslewhere and is going nowhere fast.

Angelo: “…net neutrality is literally the basis of the new … free … society.” Pretty sure he means “free” in the Bernie Bro sense of someone else having to pay for it.

Hey Bros: living in a free country doesn’t mean you get everything for free.

Obviously, the man making the threat does not even understand that Net Neutrality is anything but.