“He was fully aware of the implications of his decision” 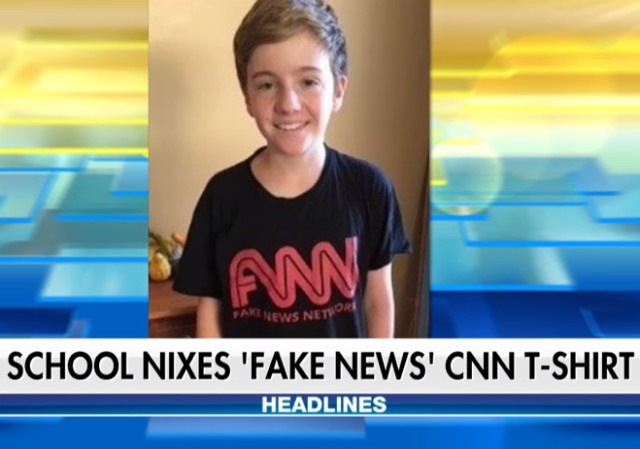 A seventh grader in Georgia made the hilarious decision to wear a ‘fake news’ t-shirt on a field trip to CNN with his middle school. His teachers failed to see the humor and made him change his shirt.

A Georgia county commissioner and her school board member husband are crying foul after their seventh-grade son was ordered to change out of his “FNN – Fake News Network” T-shirt before going on a school field trip to CNN’s Atlanta headquarters.

Jaxon Jester, a student at Peachtree Charter Middle School who is the son of DeKalb County Commissioner Nancy Jester and DeKalb County Schools board member Stan Jester, reportedly complied with his teacher’s request to change out of the shirt before touring the CNN studios, but his parents say his First Amendment rights were violated.

“This year when the CNN tour was announced, my 7th grade son Jaxon asked me if he could purchase an FNN-Fake News Network shirt to wear for his field trip,” the boy’s father wrote in a blog post. “As an advocate for the First Amendment, I agreed to his request. He picked out the shirt he wanted and and ordered it from Amazon. His mother cautioned him that he might cause a controversy and needed to be prepared for that. He was fully aware of the implications of his decision and made the affirmative choice to wear his shirt.

“We received a phone call from the principal at the middle school this morning informing us that he was forced to change his shirt,” he wrote. “I’m disappointed by the hypocrisy of this decision.”

This was the reasoning the school gave:

“The teacher involved said that she told Jax to change his shirt because she thought his shirt said ‘F-CNN,’” she wrote. “I told her that it absolutely did NOT say that. She apologized and said that she now realizes that the shirt has no profanity or suggestion of profanity on it. The principal stated that he should have been made aware of the situation before Jax was made to change his shirt. He apologized for the incident.

The local CBS News affiliate has a full statement from the school:

“An incident occurred at a DeKalb County school last week in which a teacher asked a student to change his shirt prior to leaving the school for a field trip. The request was out of concern for the student’s safety in accordance with the district’s Student Code of Conduct, which states . . . . “ the wearing of clothing, tattoos or other adornments which show offensive and/or vulgar words, pictures, diagrams, drawings or includes words or phrases of a violent nature, a disruptive nature, a sexual nature, politically/socially controversial words or graphics or words or phrases that are derogatory regarding a person’s ethnic background, color, race, national origin, religious belief, sexual orientation or disability is prohibited.”

The safety of all DCSD students and staff is paramount.

You have to admire this kid’s sense of humor and his parents for supporting him. You also have to wonder if the teachers would have reacted the same way if he was wearing an anti-Trump shirt.

Perfect example of the Streisand effect.

Your question as to what the response would have been with an anti-Trump shirt brings up indicates the times they are a changin’. This boy is getting national praise and attention for being a rebel while the rebellion of the baby boomers has become as hip and exciting as a 60 minute finger-wagging sermon.

Great name!He is just living up to it.

As much as I support the kids right, it was worn to provoke and I don’t think a middle school trip is the right forum

My daughter is a middle school principal and the stories I could tell you about parents …
It’s hard enough to keep track of all the kids and make it home with the same count as you left, leave the politics out of a school trip. Can’t we just let kids be kids and not use them as pawns?

Yeah I’m the same. As much as I think this is funny it’s also inappropriate and shows a lack of respect.

This kid should have said he was gay, identified as black and said he was a Muslim who came here on a VISA.

Someone needs to send him a “Fake Teachers” shirt to wear to school.

I attended DeKalb County schools all the way through college. My wife, also a DeKalb graduate, teaches in a neighboring county. I have had problems with CNN reporting ever since their fake 1998 Tailwind report.

With that said, a middle schooler has not been around long enough, studied enough, and compared enough facts to make an informed judgment on their reporting bias. That came from the political leanings of the parents who wanted to put their son out with their message. Apparently, the parents did not have enough conviction of their opinions to go on the field trip and for them wear it. They had to send their 7th grader.

The school was on a field trip as a guest of CNN to learn about broadcasting and the news business. As guests, the school and the students have an obligation to be polite. Wearing that shirt with a message from the parents was very impolite and he should have been asked to change it on those grounds. The parents need to examine how they are teaching their son manners.

I agree with the decision to have the boy remove his shirt. The class was the guest of CNN. And, the students were representing the school. Therefor, they should have behaved in a respectful manner. This child was not being respectful and had to change into more appropriate attire. If you want to be an activist, do it on your own time.

Well, even if it’s CNN, it’s not out of line for the school to teach juveniles that just a little bit of class is not inappropriate when they wander about in the real world.

So wear the silly-assed shirt somewhere else, kid.

Where can we buy those FNN T-shirts for Christmas gifts?

Alert the press! Another school teacher who can’t read.

I would have made him change the shirt too. Not because it isn’t true, but because it’s rude to say so while you are CNN’s guest. There is no first amendment right to wear such a shirt on CNN’s premises. CNN was nice enough to host the class on a tour; behave like a guest, and save pointing out the host’s flaws until after you leave.

CNN is a fake news network. But I support the teacher 100 percent. She had to make a snap judgment call in a complex situation.