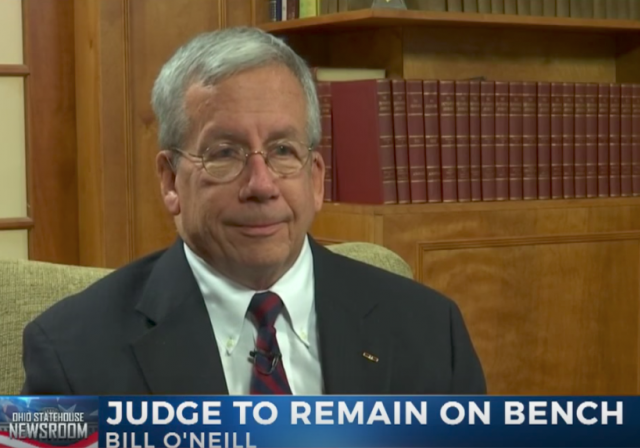 Democrat Justice Bill O’Neill decided to save his “opponents some research time” Friday with a hilarious and bizarre post to his personal Facebook page.

Due to confusing language (which made it appear as though O’Neill had an affair with Sen. Taft and his secretary), O’Neill amended the post, removing the mention to Sen. Taft entirely: 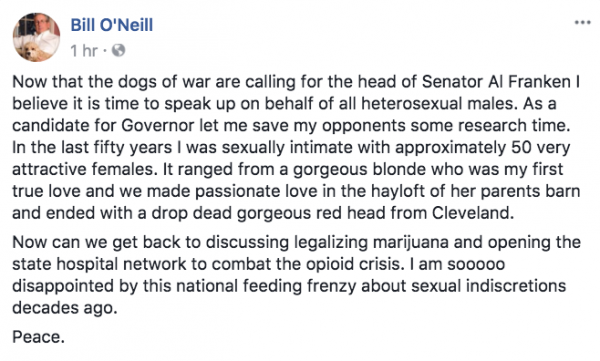 The responses to his post are hilarious and can be viewed here.

O’Neill has ignored calls to step down from the bench after announcing his candidacy for Governor.

The Ohio Supreme Court is not happy

Having a good offensive is the best defense.

No.
Workplace harassment and intimidation for sexual favors is a real thing. Males and females are both perpetrators and victims, and this is not a joke. Unfortunately, there are “victims”, for example, women who, sober, go to a man’s bed, and then change their mind days later and decide they were assaulted, who cloud the issue. Separating real victims from “had-their-feelings-hurt” victims is also a serious problem.

This fellow has just disrespected everybody who has suffered from such abuse.

As long as it was consensual, there is nothing wrong with, or, about it.

There moral are reasons why extramarital sex is wrong.
If there was a discrepancy in power, he was in a position to cause her harm if she declined, then it isn’t reasonably consensual.
If the relationship disrupted the harmony of the office, and interfered with operations, then there is a problem.
Other people are affected by our behaviors.

Unless he participated in what is now the fourth trimester of the Democratic baby hunt, pro-life conservatives may still deem him not viable, but they will not assign him to Planned Parenthood or his career to Planned Politician (PP). That’s a Democratic thing, which progressed with Watergate.

“a nice, public ego boost for an older man”. Yeah my thought too. Done right, it would have been funny, but instead, it somehow oozed a locker-room-bragging-jerk vibe, similar to “grab em by the kittens”.

I’m sure the woman he identified is not amused at being treated as the butt of his joke, so to speak.

If those two women actually exist.

He said females, not women. He didn’t specify the species.

I just hope and pray that his daddy wasn’t a mailman.

This guy is not right and he is on the Ohio Supreme Court?!

What exactly do you think is wrong with him, other than being a Democrat?

Being a Democrat means he has no honor, no integrity, and no morals.

That’s worse than being stupid. While there is no fixing stupid, being morally bankrupt requires a conversion of his soul. This smirking attempt to mock victims is a step away from the repentance and remorse necessary for moral health.

I said other than being a Democrat.

I predicted this yesterday.

They are all going to come out now and sign a giant “I’m sorry card.”

The heat will be divided amongst hundreds at the state and national levels and no one will be held accountable.

I also predict the sun will rise tomorrow and spring will follow winter.

I think you are right. No one will be held accountable except for Roy Moore and Clarence Thomas.

no (D) will be held responsible but you bet (R) will be.

Who but the left cares about what their media thinks? Remember, as the nation goes, they are a MINORITY of voters.

Take away the democrat media’s power: don’t participate in the left’s dialogue of b.s.

“Vice is a monster of frightful mien,
as to be hated, needs but to be seen.
But seen to oft, we familiar with its face,
First we endure, then pity, then embrace.”
-Alexander Pope

Super. Ohio voters get to vote for a whore-dog. Apparently again…

And the same applies to this judge. I have no idea how many women he’s been involved with over his life. For all we know he may be a virgin (or a secret homosexual), or he may only ever have had one woman in his life, to whom he’s been as faithful as something very faithful; or perhaps he’s been even more promiscuous than his “confession” admits to. Either way, his “confession” is a tall tale which he deliberately wrote in such a way that nobody would take it as factual. Even if he told the exact truth, he did it in a way that would not be believed.

Pre-emption means he owns the thread and is on offence, not defense. Nothing any accuser says can puncture the pre-emptive “I’m sorry” life raft.

Nothing except laughing at him instead of with him.

I agree with you. I don’t think should hurt him It was funny…. but he took the joke just a little too far IMHO. His timing was good, but the delivery bombed.

Is it time to bring up Obama’s White House hosting numerous rappers and other’s who promoted violence against women in their work?

ya don’t get it for (D)’s all is allowed and promoted for (R) all is condemned. so what fallout would you expect going after souch ‘color’ful people ?

— And the perv-in-chief’s (and his fake wife’s) enabling of super-predator weinstein:

Obama’s legacy has been to put a transvestite in every girl’s public toilet.

How could they resist?

In the last fifty years I was sexually intimate with approximately 50 very attractive females.

Yeah, but how many of’em were real, not just in your fantasies?

I note the absence of two words to the ‘attractive’ adjective: ‘avid’ or ‘enthusiastic’. Nobody really cares nor should care how beautiful his bedmates were, the current issue is their willingness and absence of any violence or coercion in them ending up there. I presume this judge is very intelligent and so the absence of willingness in his description of bedmates leaves a bad impression.

His physical appearance and his assertion of shagging 50 women do not reconcile. I believe that he is lying to try to bolster his credentials.

The feminists should be on him for divulging private and personal information. What if those two women who could be identified from the details did not want to be “outed” for diddling with Dilbert? Shouldn’t he have considered there interests in the matter.

Bloody hell people! You are sounding like kill joy liberals!!!

I believe he doesn’t subscribe to the notion of discretion being the better part of valor.
Men who brag about their conquests either have no morals or love to lie. Either way it’s scary to see this character sit in judgement over anyone.

To celebrate this comedic occasion I made a gif of Bill O’Neill as Andrew Dice Clay.