I saw it on Facebook. So it *must* be true. Betsy DeVos’s days are numbered, she’s on her way out, the swamp won.

The rumor was given a big boost when Salon.com ran an Alternet story about it. 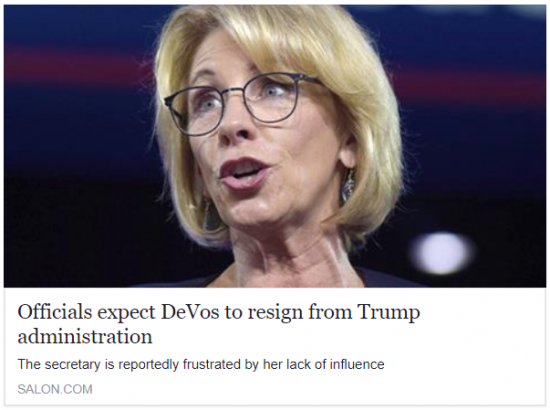 The Salon story then spread to other websites: 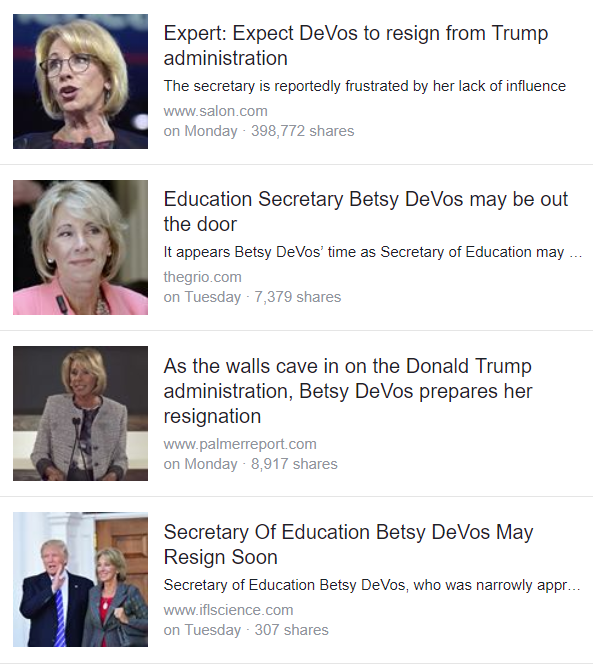 According to Chalkbeat, the Salon story was shared on Facebook over 250,000 times, and was tweeted by major anti-DeVos figures like Randi Weingarten, President of the American Federation of Teachers:

It all was based on this Politico story about DeVos’ struggles to downsize and remake the Department of Education, Politico.

DeVos is currently undertaking an administration-mandated review of the department, from the top down, hunting for inefficiency and excess. From what she has seen so far, DeVos tells me she will recommend a “significantly lighter footprint.” This hints at what some career employees fear: that the new secretary wants to eliminate entire offices within the department, which would both lighten her bureaucratic burden and free up resources for lawmakers to potentially redirect toward her ultimate objective: expanding school choice. For now she has taken a narrower tack, rolling back Obama-era regulations governing higher ed and using her megaphone to preach the gospel of free-market education.

It’s a lengthy article, worth a read, but nowhere in the Politico article does it say that DeVos is expected to resign.

Seeing its reporting abused, Politico issued a statement, POLITICO did not report DeVos’ days are numbered

FAKE NEWS ALERT: Articles are making the rounds online that cite a POLITICO Magazine profile of Education Secretary Betsy DeVos and claim education “officials” expect her to step down. That is NOT what the POLITICO article said, and there’s no reason to believe DeVos is on her way out.

Salon has added this update at the top of the story:

This article has been updated: The original article stated that officials were planning for DeVos to exit the Trump administration, it has been updated to state that an insider assumes DeVos “won’t stay long” at her post as education secretary. The original headline has also been clarified.

Why all the wishful/delusional thinking about DeVos? Certainly part of it is opposition to her goal of handing education power back to states and localities, to promote school choice, to limit the damage from Obama’s policies (particularly the Dear Colleague letter that created campus kangaroo courts), and general Trump Derangement Syndrome.

But it’s also a reflection that DeVos is on her way to accomplishing her goals, though no one thinks it will be a quick fix. And to start, DeVos is draining the Education Department swamp faster than any other federal agency.

The seventh floor of the Education Department’s headquarters near the Mall used to bustle. Now, nearly a dozen offices sit empty and quiet.

The department’s workforce has shrunk under Education Secretary Betsy DeVos, who has said she wants to decrease the federal government’s role in education, including investigations and enforcement of civil rights in schools. In all, the department has shed about 350 workers since December — nearly 8 percent of its staff — including political appointees. With buyouts offered to 255 employees in recent days, DeVos hopes to show even more staff the door.

At the same time, the Trump administration has moved slowly to fill key roles, making nominations for just eight of the 15 key positions that require Senate confirmation. The Senate, which has taken an average of 65 days to confirm nominees, has approved only two of those nominees, giving the department one of the worst track records among Cabinet-level agencies for filling senior positions, according to data from the Partnership for Public Service.

WaPo reports that there are 4,059 full-time employees in its District headquarters, 11 regional outposts and 13 field offices, so there’s a lot of shrinkage needed. And DeVos sought to cut $9.2 billion from the department’s budget of $68.2 billion.

The rumors of Betsy DeVos’ demise are greatly exaggerated. The rumors of the demise of the bloated federal education bureaucracy might be closer to reality.

The lady is one of T-rump’s relative FEW good appointments. I hope she’s in for the long haul, and that she’ll keep her principles intact (I can say principles, trolls).

I could wish my prediction regarding Rick Perry was not on point, but alas…

Or they could just deal with reality. Always a choice…

If you can’t say something nice, Rages, don’t say anything at all.
Remember learning that as a child?

I think telling the truth is always “nice”. In fact, it’s virtuous.

Am I to infer from that remark that you think I lie?
Take a long walk off a short pier, Rages.

I made no such inference. I said exactly what I meant, and asked a civil question.

Don’t you think relating the truth is “nice”?

My wife, a conservative, was just in DC accepting a Blue Ribbon Award for her elementary school. She attended with one of her teachers who is an avowed liberal who despised DeVos. By the time the ceremony and speeches were done with and she had some exposure to an alternative point of view regarding education she had less disdain for DeVos. Sort of a win.

notamemberofanyorganizedpolicital in reply to BuckIV. | November 9, 2017 at 3:18 pm

“….when Salon.com ran an Alternet story about it.”

HAHAHA. There’s a moonbat marriage made in the toilet.

From WaPo: “In all, the department has shed about 350 workers since December — nearly 8 percent of its staff — including political appointees. With buyouts offered to 255 employees in recent days, DeVos hopes to show even more staff the door.”

WE LUV YOU, BETSY!

Just how long will it take for Facebook to ban these folks.

… yeah. I’m not holding my breath either.

Looks like that Zuckerberg Fake News patrol has blinders on.

The funny thing about schumckeberg: had he not been so caught up with himself, he might have enabled what are now seen as obvious delusions of grandeur by the luckiest lottery winner on earth about becoming the next Trump, by using his luck and position to be a staunch advocate of the truth, instead of parroting nancy pelosi and becoming a parody of himself.

Facebook wants you to upload nude photos of yourself:

Where’s “Radio Free Europe” when you need it?