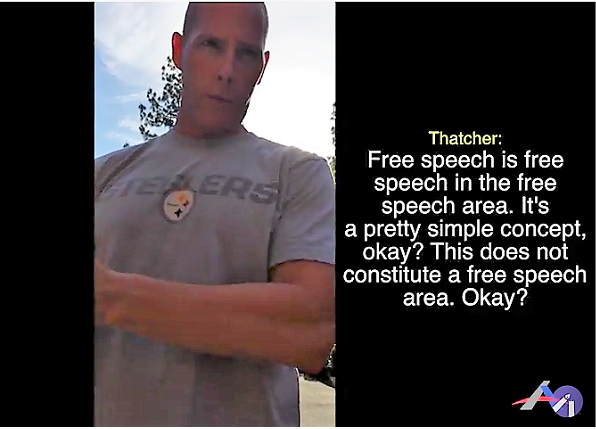 Back in May, we wrote about a Students for Life group at Fresno State University. They had written some pro-life messages on a campus sidewalk in chalk. A professor approached them and argued they had no right to do so. He even took measures to remove the messages.

Assistant professor of public health Gregory Thatcher directed his class to erase pro-life messages that Students for Life had written in chalk on the sidewalks at Fresno State, a public university.

The interaction between Thatcher and the student reporter resulted in a jaw-dropping exchange in which Thatcher condescendingly explains that such messages are only appropriate in “free speech areas.” He further notes, “College campuses are not free speech areas.”

Video footage shows Greg Thatcher, a professor of public health, scrubbing out messages like “women need love, not abortion” with his shoe and instructing other students to do the same. Thatcher claimed that the messages would only be allowed in a designated “free speech area” on campus, and says in the video that “college campuses are not free speech areas.”

However, Fresno State no longer has such a free speech zone, and an official said in a statement Thursday that “our entire campus is open and supports freedom of expression.”

In response to this, the students filed a lawsuit. This week, they won it.

A California professor who is seen on video trying to censor pro-life students drawing with sidewalk chalk has been ordered to undergo First Amendment training and pay $17,000 as a result of a district court settlement.

Thatcher allegedly harassed and intimidated the group, accusing them of chalking outside the free speech zone on campus — which hadn’t existed at the school since 2015.

“What the professor did was wrong, and the only permit a student needs to speak on campus is the First Amendment,” the pro-life club’s president, Bernadette Tasy, told Fox News.

The professor doesn’t seem to have any regrets.

As part of the settlement, in which Alliance Defending Freedom represented FSSL, Thatcher will pay $1,000 to Tasy and $1,000 to another student, Jesus Herrera, along with some attorneys’ fees. The professor is also required to undergo First Amendment training to be provided by ADF.

Thatcher told Fox News he won’t have to pay a penny out of his own pocket because the settlement was made through his insurance company.

“I did not, in any way, admit to any wrongdoing,” Thatcher said. “I did agree to sit through a training seminar because I love to learn others’ thoughts and opinions.”

It’s refreshing to cover a story that ends with a win for free speech on campus.

“I did not, in any way, admit to any wrongdoing”

Yeah, tell that to your insurance company, jerk-off. They wouldn’t have paid $17K to settle if they thought the students’ claim was frivolous.

Yes, they would, actually. Insurance companies regularly settle cases they could have fought, if they decide the cost of the settlement is less than the cost of fighting, and their client has no choice in the matter.

“A court order filed last week forbids the professor from “interfering with, disrupting, defacing, or altering” any similar student activities, the Bee added.”

… because I love to learn others’ thoughts and opinions.

He sounds like one of those types who’ll be shocked to learn that there even are other thoughts and opinions.

Tom, by “learn” he means “silence, mock, and actually physically eradicate.” Can’t you just see him in this training with his fingers in ears, rocking back and forth, and humming?

Time to update the regressive to normal and sane people dictionary. 🙂

Actually, the guy looks like the classic bully type. He’ll be the one raising his voice, yelling at the leader, and others, at the free speech seminar that they have no right to free speech if he disagrees with what they’re saying, and calling it violent speech.

And remain clueless as to why he’s wrong.

Yeah, he would benefit from a good ass-beating. A lot of our societal ills these day could be solved that way.

“I’m PC principle bro. Time to step up your game and learn your shame.”

This does not bode well for the future of the country. Instead of telling the prof/associate prof where to go with his manual labor order, these good little followers (aka students) simply complied with an order which had nothing to do with their class. Oh well, it is California.