Papadopoulos Says He Lied To FBI Out of Loyalty to Trump

Papadopoulos Says He Lied To FBI Out of Loyalty to Trump 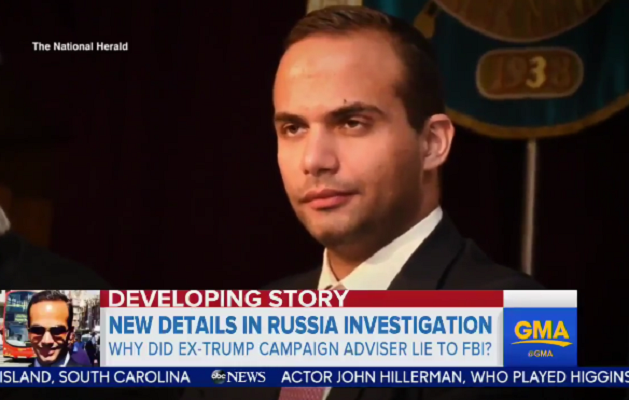 George Papadopoulos, President Trump’s former foreign policy aide, pleaded guilty to lying to the FBI about the timing of meetings in which he participated.

Papadopoulos lied to FBI in "an apparent case of blind loyalty to protect Donald Trump,” ABC News reports, and is “upset the man he tried to protect is now trying to distance himself.” https://t.co/yJ41X7QURP pic.twitter.com/IvPIImrRSd

ABC News reports that Papadopoulos claims he fudged the dates because he did not want to contradict the president’s public statements regarding these meetings.

George Papadopoulos, the Trump foreign policy aide who pleaded guilty to lying to the FBI, initially misled agents out of what he claimed was loyalty to President Donald Trump, according to a person with direct knowledge of the investigation.

Trump had publicly denied that there had been any contact between his campaign and Russian officials, and Papadopoulos did not want to contradict the official line, the source said.

Papadopoulos met with the FBI agents investigating those alleged ties shortly thereafter, and he later acknowledged that he lied during that meeting about the timing of certain contacts.

According to federal court filings, Papadopoulos initially claimed his contacts with a professor who had deep ties in Russia “occurred before” he became an adviser to the campaign.

“In truth and in fact,” the filings read, “the professor only took interest in defendant Papadopoulos because of his status with the Campaign.”

/me throws the BS flag

only a fool *lies* to the FBI, or any other LEO agency. when all else fails, keep your dumb mouth shut & get a lawyer to answer their questions.

“Papadopoulos lied to FBI in “an apparent case of blind loyalty to protect Donald Trump,”
Oh PLEASE, loyalty to Trump when he is associated with Fusion GPS. More likely he mistakenly told the truth the first time and knowing what happens to low laying fruit that cross the Clintons decided to retract his statement.

He is a Fushion CPS IMO and was trying to entrap Trump in the Russian collusion narrative .
When he was in London he met with a Russian woman who claimed to be a relative of Putin .This woman Was likeLy Natalyia Vetneskiya

“…according to a person with direct knowledge of the investigation.”

Oh, him/her again. The needle on my BS-Detector just buried itself.

The oh so cliché question comes to mind; Was he lying then or is he lying now? Would anyone connected to Fusion GPS recognize the truth if they fell over it. It would seem that lying is their course of choice.