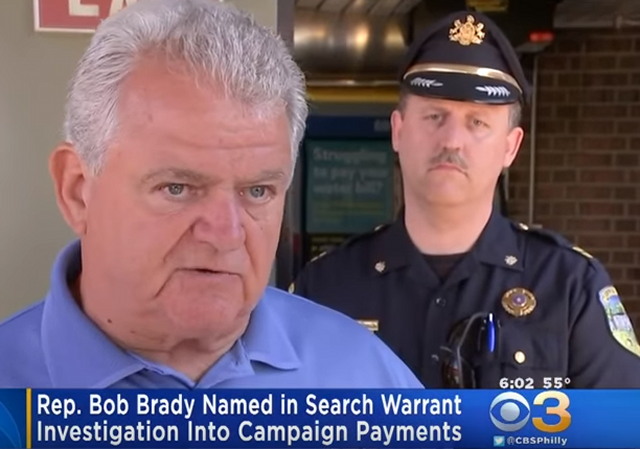 Rep. Bob Brady of Pennsylvania has become the subject of an FBI probe based on alleged criminal campaign finance activity during the 2012 election. Brady’s campaign is accused of paying his primary opponent to drop out of the race.

Katie Zawadski and Andrew Desiderio of the Daily Beast:

FBI Investigates Congressman for His Campaign Paying Opponent to Quit

The FBI said it is investigating Rep. Bob Brady (D-PA) for an alleged scheme to pay his primary opponent to drop out of a 2012 race against him and for allegedly lying to investigators.

The revelation came from a search warrant application unsealed in a Pennsylvania federal court on Monday, which was first reported by Seamus Hughes. An FBI agent asked a judge to authorize access to Brady’s personal email account on the belief it holds evidence contradicting an anticipated defense about the campaign payments. The judge approved the warrant and the FBI said it got one CD worth of data from the email account.

Brady’s congressional office in Washington, D.C., could not be reached for comment. Brady has not been charged with a crime.

Jimmie Moore ended his campaign for the Democratic nomination in February 2012 after allegedly receiving $90,000 from the Brady campaign. The FBI said the payments were routed from the Brady campaign to businesses owned by his aides. Then the money was transferred to one of Moore’s aides, who used it to pay for services rendered to the Moore campaign.

Rep. Robert Brady, D-Pennsylvania, is suspected of wrongdoing in the FBI’s investigation into payments his campaign allegedly made to his opponent in 2012 to encourage him to drop out of the race, according to an approved search warrant application filed in the U.S. District Court for the Eastern District of Pennsylvania.

Two political consultants have already been charged in the campaign finance probe involving Brady’s reelection campaign, but the recently unsealed search warrant application appears to be the first time Brady himself is mentioned as suspected of criminal wrongdoing in the probe. Federal prosecutors last month said Kenneth Smukler and Donald Jones planned a scheme for the Brady campaign to make an illicit $90,0000 campaign donation to Jimmie Moore, intended to pay down campaign debt.

Here’s a short video report from CBS News in Philadelphia:

This just became a national news story but has been covered locally for weeks. Jeremy Roebuck of the Philadelphia Inquirer reported back on October 2:

Former judge admits concealing payments he got from Brady campaign

A onetime challenger to U.S. Rep. Bob Brady has agreed to cooperate – and potentially testify — in an ongoing federal investigation into $90,000 he says the congressman’s campaign gave him to drop out of a 2012 primary race.

But Jimmie Moore, a former Philadelphia Municipal Court judge, remained tight-lipped Monday on whether his testimony could implicate Brady, one of Philadelphia’s most powerful Democrats, in a crime.

The details of Moore’s cooperation with the government emerged during a federal court hearing in which the onetime Brady rival pleaded guilty to falsifying his campaign finance filings to conceal the $90,000 payment.

His lawyer, Jeffrey Miller, said in court that Moore had been working with government lawyers for months, but he declined afterward to elaborate on the extent of that cooperation or where it might have led.

Democrats. Nothing to see here, move on.

Sorry for the accidental down-ding! I meant to click “Reply” but accidentally clicked the thumbs-down button instead because, it’s located too darn close to the “Reply” button.

Oh – and the reply I had intended to leave was: “Hopefully the Philadelphia Democrats learned from their prior scandals not to deliver the cash in brown paper bags this time.”

JPL17, I was under the impression that a thumbs up or down could be negated by clicking on it again. I tested this on you comment. Unfortunately, once a vote always a vote, so there’s no fooling with the “ballot box” once cast. So, this explains the down vote.

Many other sites allow for removing votes by again clicking on the up or down “button”. LI does not.

while i like LI, this feature/failure is not one of them –
a re-edit button would also be nice.

Yes, I really would like an edit function rather than having to reply to your own post in order to correct typos, change your mind, etc.

Those thumbs are like bullets: once you drop the hammer you own it, for better or worse. You can’t call ’em back.

Why does it seem these issues are pretty much ALWAYS with Democrats??

Caught a segment on youtube where Larry Elders and Geraldo Rivera went head to head and Geraldo did his normal fence sitting middle of the road well..it is not like the rigging of elections is not on both sides…Geraldo then dredged up and basically blamed all gerrymandering on Republicans to which Elders said how does that even compare to Al Gore throwing out all the military ballots.

I still think the most egregious recent election abuse was Obama’s suppression of conservative political groups with the IRS attacks prior to the 2012 elections. I still do not know how that one got glossed over. Lois Lerner is making a bid to suppress the record of her misdeeds at the IRS, petitioning the court with a claim that her safety and life would be in danger if the public learned the actual record. That says a lot, and beckons transparency in government.

Geraldo then dredged up and basically blamed all gerrymandering on Republicans

In fact, Elbridge Gerry was a Democrat. President Madison’s VP.

“I still do not know how that one got glossed over…” How? With the DNC being the political arm of the MSM, the explanation stares us in the face.

It is hard to keep track of all the scandals these days.

Our political class is just not looking good these days.

Truth is the enemy of the political class (politicians and MSM) as is ethical (non-Machiavellian type) behavior. The size and depth of the swamp is making Lake Superior look like a shallow pond.

So a legal question: is it illegal to pay an opponent not to run in an election?

In the Brady case, a big part of the issue is the source of the funds and how the funds were delivered. Those very well may be crimes and need to be investigated.

But suppose I flat out pay my opponent from a personal fund — that is, money that’s mine, that I earned, and money that wasn’t donated or contributed to some election fund, etc.

Just at a guess, the illegal part is probably attempting to hide it.

I think your guess is correct …