“The students who smeared me got a safe space complete with coloring books and markers.” 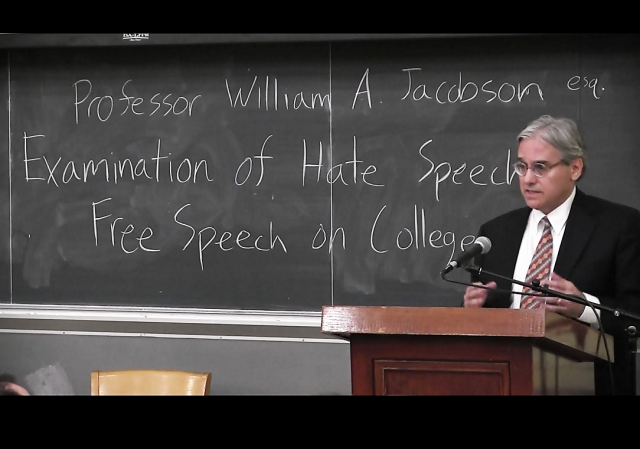 I have an Op-Ed today at USA Today on the campaign by student activists at Vassar College to shut down my lecture on “hate speech” and free speech, based on fabricated claims that my appearance posed a danger to student safety.

You can read these two posts for background:

The students behind the campaign are explicitly anti-free speech. They claim there is no individual right to free speech, only a collective right to be free from harmful speech, as I documented in my post, Vassar activists: Free Speech rights invalid “in our white supremacist, patriarchal, capitalist society”.

In addition to rejecting the individual protections under the Bill of Rights, the activists have created a sideshow claiming that a change in the name of the speech was the problem. It wasn’t, as I wrote at the Cornell Sun, Setting the record straight on the attempt to silence me at Vassar.

I have an Op-Ed today at USA Today about my Vassar experience, and the implications for freedom of speech on campuses, My pro-free speech views made me the target of a smear campaign at Vassar College. 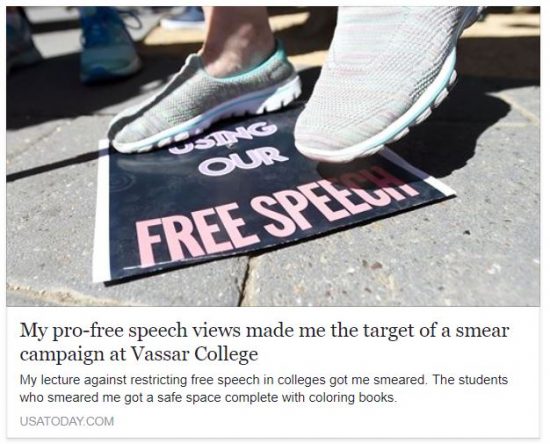 … I’m not a household name. And I’m not particularly controversial, although I do stick out at Cornell as one of only a small number of openly politically conservative faculty members.

So despite my campus speeches and conservative politics, I never really thought the anti-free speech mob would come for me. Until they did, at Vassar College in Poughkeepsie, N.Y….

Because I committed to discussing free speech and the constitutional protection of even hateful speech, I was made the object of hate by student activists who whipped the campus into a frenzy.

Why would any right-of-center student, faculty member or guest speaker want to endure what I had to go through? For that matter, why would any liberal defender of free speech want to undergo such a smear campaign?

And isn’t that the point? While I was permitted to speak, the message was sent that support for the 1st Amendment and freedom of speech is not welcome. To get to speak on these sensitive yet critical topics means you have to run the gauntlet of anti-free speech progressives.

Here is what the student activists didn’t want to happen on campus:

The protesters are just goons, some of them may even be hired astroturf. The actual guilty parties are the administration that allow this intimidation to occur. Where are the expulsions for people actively denying civil rights to speakers and other students?

If you want anything to be done about this situation, you need to attack the administrators.

I noticed a comment on the USA Today site stating people like you should “self control “ you speech and live to fight another day. What nonsense. Self controllling speech is self censorship. In effect it’s letting the left win by abandoning the field of battle.
The people in the country should see MORE of these attempts of trying to stifle speech. Make the country MORE aware of what is occurring at our schools. More speech is always desirable to less speech.

I’m not the bravest man who ever served in the Navy. There are two in the competition as far as I’m concerned.

Still, I grew up in the wake of the Vietnam war. I was a Coast Guard brat so when I visited the hospital I got to see passageways full of men horribly burned or otherwise mutilated.

And I joined anyway. I do not believe these children have anythinng to show me. But that’s not the point.

I only bring it up because whatever additive the good professor is putting in his Wheaties, I want some. He’s got some huge brass ones.

These events are faintly reminiscent of my Constitutional Law class. We had reached the decisions relating to the subject of pornography, which had of course put the class in a merry, talkative mood ahead of time. We arrived at class to see the chalkboard (yes, that long ago) had written on it, “What kind of Sex is pornography?”

The class was full by the time the professor came in, walked casually in front of the chalkboard, and wrote “Fun” underneath.

In a similar manner, the Criminal Law professor opened up class one day with the question, “What constitutes a deadly weapon?” After a little discussion, he offered, “a pencil?” which led to a discussion about whether the words written down could be deadly. At that point, he silently held up a pencil, grounded the eraser against his palm, and curled his fingers around it to make a fist. Oh. Yeah, that’s a weapon.

Very young adults usually have not yet thought clearly or deeply or with particularity about any number of controversial subjects. Further, what “teaching” they have had on many politicized subjects has been designed to interfere with rational thought, rather than promote it.

I am concerned that our young people in our colleges are being subjected to a great deal of demagoguery, some of which clearly promotes violence rather than voting as a political solution.

But should a pencil (or a chair, or any other found object, whose purpose is not to harm people) be classed as a weapon? When the legislature created the offense of “assault with a deadly weapon”, I’m pretty sure they didn’t intend to give prosecutors the gift of being able to throw one more charge against anyone who happened to pick up and use a found object in the course of the crime he’s already charged with. If the defendant tried to beat someone to death with a chair, you’ve already charged him with attempted murder; why do you think it’s right or proper, let alone necessary, to pile on assault with a deadly weapon? How is his crime any worse than if he’d used his bare hands? I don’t think it’s right.

I also think it subverts the purpose of the law. I think the legislature meant to deter criminals from using actual weapons in their crimes, objects whose purpose is to deal damage. It wanted them to stop before using such objects, and consider that it will go better for them if they refrain. Charging everyone who uses any kind of object defeats this purpose.

(This is an actual case. A friend of mine was the prosecutor, and he was shocked that the stupid grand jury no-billed him. He was even more shocked when I told him I agreed with them and would have done the same.)

The kids are alright. Yeah maybeh It sounds like I’m just saying something.

But I had no choice. I put my life in the hands of eighteen year olds. In the eighties, in the nineties, in the first decade of this century. In every decade they’ve rogered up.

Ow. That’s how you want to remember me by.

It’s amazing that students attending a college that charges $52,320 just for tuition would be protesting against a patriarchal, capitalist society” that they benefit from.

Sometimes you can cut through the hypocrisy with a knife.

In an essay for the Knight First Amendment Institute, Goldberg laid out three possible options concerned students can take if they decide to shut down an upcoming guest lecture event. Goldberg argues that students should embrace the “heckler’s veto,” or the notion that threats of violence from those planning to attend controversial events should justify administrative decisions to cancel such events.

First is an approach that looks to past events to predict future costs. Here, a school might exclude speakers whose recent events have been accompanied by violence or severe disruption or perhaps by protests that are large, vigorous, and non-violent.

Second is an approach that seeks to predict event-management costs based on the risks posed by a speaker’s message. Here the focus on would be on the extent to which a speaker’s usual message encourages violence and harassment either generally or toward specific groups within the community, even though the message has not previously prompted violence or large, unruly protests.

Third is an approach that focuses on costs over time from messages that community members experience as threatening, not necessarily of imminent violence but of longer-term harm. More particularly, this approach would potentially exclude speakers who are known to express derogatory messages that leave certain community members feeling threatened and exposed to increased risk as a result.
http://www.breitbart.com/tech/2017/11/06/columbia-law-professor-lays-out-methods-for-banning-threatening-guest-speakers/

“The students behind the campaign are explicitly anti-free speech. They claim there is no individual right to free speech, only a collective right to be free from harmful speech…”

The parallels to the Second Amendment collective vs. individual rights arguments are intriguing.