“We expect it to persist unless a solution is put in place.” 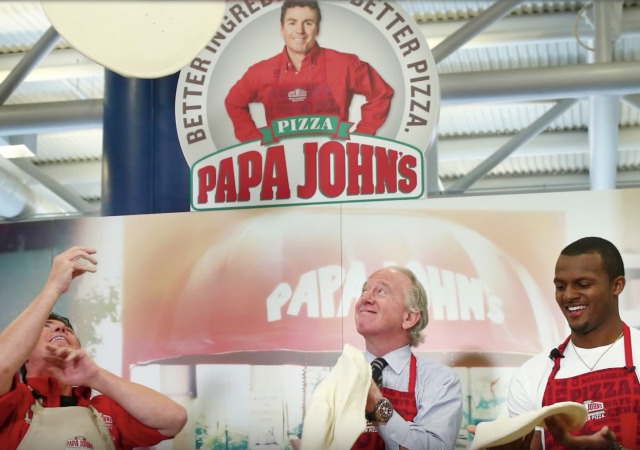 Papa John’s founder and CEO John Schnatter has announced that the anthem protests by NFL players have hurt pizza sales. From ESPN:

“The NFL has hurt us,” company founder and CEO John Schnatter said. “We are disappointed the NFL and its leadership did not resolve this.”

Executives said the company has pulled much of its NFL television advertising and that the NFL has responded by giving the company additional future spots.

“Leadership starts at the top and this is an example of poor leadership,” Schnatter said, noting he thought the issue had been “nipped in the bud” a year and a half ago.

In revising sales estimates for the next quarter, Papa John’s president and chief operating officer Steve Ritchie said on the call that the NFL deal was the primary suspect behind the decline and that “we expect it to persist unless a solution is put in place.”

The declining viewership, which is because of the protests and other factors like penalizing everything and referees not knowing what a catch is, along with negative feelings toward the league caused the slump according to those in charge at Papa John’s.

Papa John’s has almost become simultaneous with the NFL the past few years due to its sponsorship with the league and 23 of the teams. Prominent ads include Schnatter with former Denver Broncos QB Peyton Manning, who owns a few franchises in the city.

Shares of the pizza chain fell by 10% on Wednesday. Papa John’s said that “same-store sales grew 1 percent, falling short of a 1.4 percent rise.”

Due to the anthem protests? Pfft, Papa Johns went on my personal unapproved vendors list last year after they sponsored the abomination that was Ghostbusters (2016).

Easy solution. Advertise during college football games instead. Although it has it’s share of faults, college is way better and more exciting than the tonedeaf NFL.

So there are some positive second order consequences: fewer people in an increasingly obese nation are sitting on the couch on Sunday eating high fat, high cholesterol delivery pizza.

Then again, it could be because your pizza tastes like cardboard.

I only get it when it’s half price, when the Yankees score 6 runs in the regular season, and this year when they won games in the playoffs. Still they don’t put enough toppings on, and even at half price it’s more expensive for what you get than Costco pizza. But more varieties.

He wants the controversy to just go away, but that is not in the democrats interest or playbook. They will never stop playing the race card and it is just to easy to enlist useful idiots as pawns in their divide and conquer game. They get two birds with one dirty trick, blaming republicans and destroying football. That 70% of the players are black millionaires is of no concern to them. The millionaires will keep doing their bidding even after they have squandered the riches.

“Papa John’s has almost become simultaneous with the NFL the past few years due to its sponsorship with the league and 23 of the teams.”

That is, coincidental with the collapse of the NFL ratings, not horrible Papa Johns pizza.

Me, I would’ve more associated Budweiser with the NFL

Papa John’s tied its advertising campaigns very closely with professional football. So I’m sure that the current NFL controversy is hurting their sales. How much it is affecting Papa John’s sales is arguable, though.

Watching the NFL owners and the players come together on this terrible decision to allow kneeling/protesting during our national anthem is similar to the Europeans allowing the mass inflow of mostly young muslim men. Both the NFL and Europe are now trying to understand why the public is turning away from their stupid decisions. One will end with a whimper and the other will not end until Europe is islamic. How do leaders make such bad decisions?

Next thing you know, some NFL players will be blowing themselves up with suicide bombs on the field, while shouting “Alu Akbar!”

The saving grace: there won’t be anyone in the stands.

The NFL has been damaging its business model for years. That affects associated businesses, like TV networks and pizza chains. If the NFL would focus on its core business, which is entertaining football people want to watch, it could avoid the damage –or it could if it weren’t too late. It may be too late.

One more game and baseball is over. But the NFL never started for me.

Papa John’s better be careful or else progressives are gonna start demanding they change their name to something more gender-neutral. ‘Papa’ is to patriarchal after all.

NFL players, the vast majority of them anyway, have made it crystal clear to the public that they HATE America and believe white Americans are RACIST.

Curious what kind of “solution” could be put in place to fix this.

The cat’s out of the bag.

They aren’t going to stop HATING us just because the League and its owners eventually realize they have to force them to pretend to respect the flag and our country.

I expect the NFL players will continue to be vocal political activists for the radical racist Left, and the NFL fan base will dwindle until it is essentially the same as the NBA’s.

Another article included his comment that it would not be fixed until the league came up with a solution “the the owners’ and players’ satisfaction.”

The players don’t get a vote. They are the employees who started this mess in the first place with protests against American law enforcement officers over a lie.

No employee has the right to protest on company time, in his company’s uniform, on company property and/or in front of its customers while getting paid being paid for his time.

The NFL league owners are running scared from a union and its customers say, “ENOUGH! We will not fund this protest, even if it only happens for several minutes a game. That flag, that anthem….those are ours, too. And while you may have no respect or love for them, WE DO!”

….other factors like penalizing everything and referees not knowing what a catch is,…..

Perhaps you can give us all a resume on how you are qualified to make the statement that officials “don’t know what a catch is?” (Or that they are penalizing too much.)

Perhaps you can point to your vast collection of rule books and case books on these subjects? Perhaps you can tell us your scores on officiating tests at any level from youth football through the NFL? Can you tell us all what schools and training you have paid for that allows you to make these statements?

C’mon. Step up to the plate as it were. There isn’t an official’s association anywhere in the country that isn’t looking for officials in all sports and at all levels.

When can your local officials group expect your application?

Ask owners of sports bars how it is going. Ask the servers. You’ll know immediately that people are not watching as much. Maybe it’s only 15% down but that’s the cream on the top.

The little guys always feel the pain first. League, players and owners will feel it bad next year if this continues.