“If Thrush is acutely aware of what young women face in the business of political journalism, he should also know it’s because he himself is one of the problems women face.” 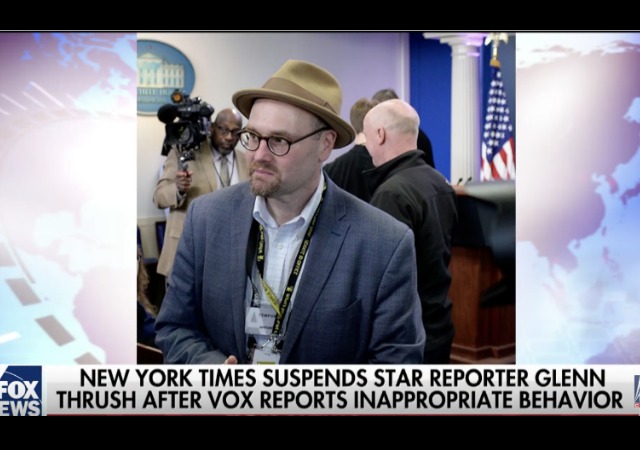 The author Laura McGann worked at Politico with Thrush had her own incidents with Thrush, but spoke to several other females who had similar experiences with the reporter.

McGann interviewed 40 people associated with Thrush to get an idea of the power he holds in the D.C. media. Those who have worked with him told her that “he can get a writer’s name in front of the right editor, if he wants.” The leaders within a newsroom cares about his thoughts while others said that “Thrush had used his connections to help them land jobs or develop new sources.”

One young woman told McGann that she met Thrush at a Politico going away party and they “shared a few rounds of drinks in a booth.” But the 23-year-old’s night ended in tears on a street corner “after she resisted his advances.” The woman texted her friends, who told her to go home via Uber, but she chose to walk with Glenn:

He repeatedly tried to take her hand as they walked, she recalls, but she kept pulling it away. They crossed the Key Bridge from the Virginia neighborhood where Politico’s office is located into Georgetown. He led her down an incline to a dimly lit path along the old C&O Canal bed. He kissed her, she says, and she panicked. Then her phone rang, jolting her. It was Padró Ocasio.

“I felt very protective of her,” Padró Ocasio said, describing the call. “I thought, she’s drunk right now. If I don’t do something, I’m not going to forgive myself.”

The young woman ordered an Uber — the receipt shows it was about 11 pm — and says she planned to call Padró Ocasio back once inside the car. In the few minutes she waited, she said, Thrush walked back over to her and started to kiss her again. She began to cry. When Thrush saw, he abruptly walked off, waving his hand flippantly, and left her alone to wait for her ride, she said.

The young woman’s friend Bianca Padró Ocasio, who used to work at Politico, showed McGann texts she exchanged with Thrush after the encounter.

That’s when McGann dived into her own story, which happened five years ago at the same bar as the young woman’s encounter with Thrush. McGann explained:

If Thrush is acutely aware of what young women face in the business of political journalism, he should also know it’s because he himself is one of the problems women face. Five years ago, when Thrush and I were colleagues at Politico, I was in the same bar as Padró Ocasio’s friend — perhaps the same booth — when he caught me off guard, put his hand on my thigh, and suddenly started kissing me. Thrush says that he recalls the incident differently.

On that night five years ago, I joined Thrush and a handful of other reporters for a few rounds at the Continental, a Politico hangout in Rosslyn, Virginia. At first, nothing seemed strange, until the crowd had dwindled down to Thrush, me, and one other female colleague.

Thrush tossed a $20 bill at her and told her to take a cab and leave us, “the grown-ups,” alone. He slid into my side of the booth, blocking me in. I was wearing a skirt, and he put his hand on my thigh. He started kissing me. I pulled myself together and got out of there, shoving him on my way out.

At the time, Thrush was a reporter at Politico and McGann worked as an editor. She said they “hardly crossed each other’s path.” But that didn’t mean anything to the work environment the encounter caused. She received an apologetic email from Thrush, but it was hardly the end:

A few hours later, I saw him in deep conversation with a number of men I worked with. My gut told me something was up. I worried he was covering his tracks by spreading a rosy version of the night. As many people told me in the course of reporting this story, Thrush is a talker — or, as many put it, “a bullshitter.” He likes to hear gossip, and he likes to spread it.

Gradually, things in the office started to change for me. Certain men in the newsroom, I thought, started to look at me differently. Some of their comments seemed a bit too familiar or were outright offensive. I had a nagging sense that I just wasn’t as respected as I used to be.

I started to think maybe I shouldn’t be in journalism if I couldn’t hang in a tough newsroom. I found myself on edge, nervous and anxious all the time. I started to believe I had brought this all on myself.

In the course of reporting this story, I was told by a male reporter who’d worked at Politico at the time that my instinct was right. He said that the day after that night at the bar, Thrush told him about the incident, except with the roles reversed. I had come onto him, the reporter said Thrush told him, and he had gently shut it down.

It turned out that Thrush often did this. He would claim that the young female journalist came onto him and he was the one who put an end to it. One woman told McGann that she and Thrush attended a Politico going away party (I’m sensing a theme here) and she drank a lot when Thrush offered to drive her home. She raised objections, reminding him he’s married and he left, leaving her with barely any clothes on. A friend said the woman doesn’t consider it assault, but that the incident left her “very rattled and upset and ashamed of what she saw as her role in it.”

Another woman had an encounter at a Politico party:

Another woman described to me a 2013 Politico party that she attended in her early 20s. She said she was standing alone, Thrush came up to talk to her, and suddenly he leaned in and landed a wet kiss on her ear.

“It all happened very quickly. And he leaned in very quickly,” she said. “At the time, I remember thinking … adults sometimes kiss each other on the cheek. Then sometimes they miss and slobber on your ear. It was my way of thinking this wasn’t as weird as I thought.”

“The behavior attributed to Glenn in this Vox story is very concerning and not in keeping with the standards and values of The New York Times,” The Times said in a statement on Monday. “We intend to fully investigate and while we do, Glenn will be suspended.”

The Times also said Mr. Thrush had said he planned to enter a substance abuse program and that the newspaper supported his decision.

Mr. Thrush could not immediately be reached for comment.

He is currently authoring a book with his colleague Maggie Haberman about President Donald Trump’s administration. She used to work with him at Politico.

Thrush also works as an MSNBC contributor. The network said that it will wait for the outcome of the NYT investigation and that he has not been booked to make any appearances.”

I have this vision of a hungry alligator sprinkling salt on his own tail while salivating.

notamemberofanyorganizedpolicital in reply to Anchovy. | November 20, 2017 at 4:48 pm

What a shock. Another male feminist ‘champion’ is actually a sleazy douchebag that mouths the words because he knows Democrats would bend over backwards to excuse his behavior.

The media’s War on Women continues.

I can see why he has to try so hard. In that hat he looks like the biggest dork since Elmer Fudd.

Isn’t there a disease, or medical condition, known as Thrush??

So, no due process. No presumption of innocence.