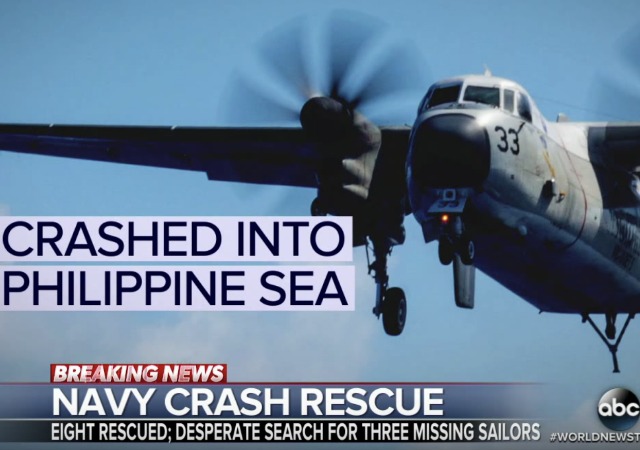 On Wednesday, a Navy plane over the Philippine Sea crashed with 11 passengers and crew members. Rescuers picked up eight people and flew them to the USS Ronald Reagan.

The Navy immediately started a search-and-rescue mission for the other three. However, officials decided to suspend the search on Thursday.

The C-2A, which the Navy refers to as a carrier onboard delivery plane, or COD, had taken off from Marine Corps Air Station Iwakuni, Japan, and was on its way to the Reagan when it crashed. The plane is typically used to bring cargo, mail, distinguished visitors and media onto aircraft carriers.

Ships and aircraft from the U.S. Navy and Japan Maritime Self Defense Force are on the scene searching for the remaining three. From the U.S. side, they include the destroyer USS Stethem, MH-60R Seahawk helicopters, P-8 Poseidon and P-3 Orion maritime patrol aircraft. Japanese assets include the helicopter carrier Kaga and destroyer Shimakaze.

The plane was transporting people and cargo to the USS Ronald Reagan “during a joint exercise with Japan’s Maritime Self-Defense Force” when it crashed. The Navy described this exercise as the “premier training event” with the two countries.

The Navy told the Japanese Ministry that engine trouble probably caused the crash. Other possible causes include problems with “fuel and oil sources.”

But after a day, the officials suspended the search. From Fox News:

“Our thoughts and prayers are with our lost shipmates and their families,” Rear Adm. Marc Dalton said in a statement released late Thursday. “As difficult as this is, we are thankful for the rapid and effective response that led to the rescue of eight of our shipmates, and I appreciate the professionalism and dedication shown by all who participated in the search efforts.”

My understanding is that the C-2A pilots are very experienced former E-2C pilots so something must have gone seriously wrong with the aircraft like losing both engines.

In my experience with multi-engine aircraft, when both engines are lost at nearly the same time it is usually contaminated fuel. We experienced a spate of fuel problems years ago in the airline world so that we had to use two different trucks to pump fuel into the plane to make sure that it did not come from the same possibly contaminated supply.

Yup. Fuel was my first thought as well. The E-2 / C-2 is absurdly reliable and simply doesn’t lose both engines at once. With fighters, it’s different. One engine can toss a blade and if you’re unlucky, it flies right into the other engine because they are so close together.