“evening news shows of ABC, CBS and NBC have yet to cover the trial at all” 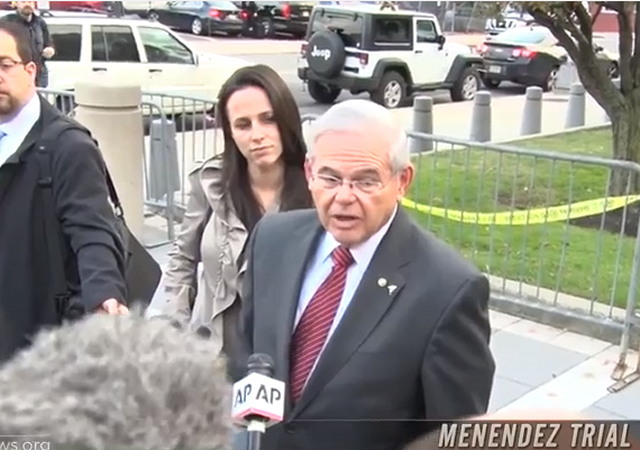 If you looked at the national news lately, you’re unlikely to hear much about the corruption trial of sitting Democrat Senator Bob Menendez.

After 62 days, the evening news shows of ABC, CBS and NBC have not given any coverage to the trial of sitting U.S. Sen. Bob Menendez.

The jury could return a verdict Wednesday on whether or not Menendez is guilty of corruption and bribery in a case that alleged he accepted lavish gifts in exchange for lobbying for his friend’s political interests. The Democrat from New Jersey has already missed a number of Senate votes while he has been on trial, and if convicted, could be removed from the Senate entirely.

Mike Ciandella of News Busters breaks down the numbers:

After 62 days of testimony, closing arguments and now jury deliberations, CNN has only managed to devote a paltry 36 minutes out of their 24/7 news broadcast to the corruption trial of sitting Democratic Senator Bob Menendez.

More than two-fifths of this coverage (14 minutes, 35 seconds) has been generated by one anchor: Jake Tapper, split between his weekday show The Lead and his Sunday show State of the Union. Most of CNN’s news programs, including the prime time shows Erin Burnett OutFront, Anderson Cooper 360 and CNN Tonight With Don Lemon, still haven’t covered the trial at all.

But even CNN’s lack of coverage isn’t as bad as the broadcast networks. The evening news shows of ABC, CBS and NBC have yet to cover the trial at all. Additionally, NBC’s Today has also failed to cover the trial for even a second, while ABC’s Good Morning America and CBS This Morning each ran just one story on their morning news programs (1 minute, 48 seconds and 22 seconds, respectively). Evening news coverage is more important, because on average it gets about twice the viewership of the morning shows (23 million vs 12 million for 2017).

Here’s a local media report on the Menendez trial:

It’s almost like the media wants Democrats to win and Republicans to lose. Almost.

The ink wasn’t even dry on the WaPo story of Roy Moore’s alleged misconduct and Mitch McConnell was calling for him to “step aside.” I searched McConnell’s statements in the last year for any mention of Menendez, perhaps suggesting that “the Senate is no place for corruption…”. Of course, there was nothing.

1. McConnell said nothing the T-rump did not say.

2. Menendez is involved in a legal matter. It’s appropriate to STFU regard it. The Moore question is purely outside of any possible legal questions (except a civil action by Moore, which will not happen).

1. In a ‘compare and contrast’ observation about a particular person’s statements/conduct, what anyone else says/does is irrelevant. At least that is the lecture anytime anyone points out the glaring hypocrisy over Bill Clinton’s proven conduct -v- unproven allegations against anyone else.

2. The issue is that they are on radio-silence about Menendez, not that they are inappropriately opining on innocence-v-guilt. I reckon in some weird universe there is some material difference between Menendez (radio-silence) and Manafort/Gates (radio blaring to this day and likely forever more) OTHER than one is Dem and two aren’t.

1. is incoherent. I’ve read it several times, and I can’t find a point that is relevant. If you want, try again. We all here agree that Dollar Bill is an unproven criminal (the the legal sense), though he is in every other sense.

2. maybe you can point to a McConnell statement regarding Monofart. I admit to being ignorant of any. Who is “Gates” in any of this?

Its incoherent to you because you lack the basic ability to understand arguments that run counter to our beliefs. Hence why you call anyone a liar you don’t like HAHAHAHHAHA

OK, asp trolling Princess Di, you translate for us all.

1. True. McConnell and Trump both backed Moore’s opponent and this strikes me as an irresistible “I-told-you-so” opportunity to shame the impunity of Alabama voters who wouldn’t back the Establishment candidate. Condemn him? Okay. But do y’all have to appear so eager to do so?

Early Moore supporter here. I have not jumped to tar the man as guilty, though I do have a gut feeling that the allegations are true. I’m still open to being convinced, though I thought this Hannity segment was damning more than convincing of innocence.

Menendez is a Democrat, elected to take from those who earn and give to those who don’t. The latter love him, regardless of what taking he does for himself.

He’s not taking. That’s his commission.

‘Local’ news, not national. As opposed to the Moore charges, which are, er… local.

But…but…Trump overfed the koi!!! How can the corruption trial of a Dimocrat Senator compete with that?

You can bet Rags left flap the media will suddenly become interested in the case of old man Menendez is found not guilty!

I dunno. Would YOU, you stupid asp troll, call that “radio silence”…???

And remember, Menendez, for all his faults, was a critic of Barracula. Or did you even know that, living in the UK?

Of course the MSM is uninterested in Menendez.He was a fair haired liberal Democrat who got caught using his office to illegally enrich himself. e is an embarrassment and the propaganda arm of the Liberal/Progressives and the Democrat party simply want him to fade away as quietly as possible.

Moore is another story entirely. The Dems see a chance to get a Democrat Senator from Alabama for the next few years. And the Establishment Republicans see this as a chance to push Moore out and possibly install an Establishment candidate. Moore’s behavior, over the last few years, has been flaky. This has not endeared him to the Republican party. It also makes him less electable at the state level. What happened this year was a continuation of the anti-Establishment backlash from mainly Republican voters. When McConnell endorsed Strange, that gave a huge boost to Moore’s candidacy, in the primaries. Trump’s endorsement had almost no impact, as most Trump voters are not overwhelmed by Trump the man.

Wouldn’t it be interesting to compare with the coverage of Tom DeLay’s charges? DeLay “only” a Representative facing clearly politically motivated State charges. Menendez a Senator facing very real Federal charges. I’ll bet the contrast would be unbelievably skewed.

Hows about we compare the allegations against Roy Moore (supposedly kissed a teenager) with those allegations of Old Man Melendez PAYING for sex with underaged hookers who were most likely the victims of sex trafficking.

Again, Ill wager Rag’s left flap the media takes a sudden interest in this case ONLY if Old Man Melendez is found not guilty.