“End of the talks could be the end of Merkel too,” writes German newspaper Tagesspiegel 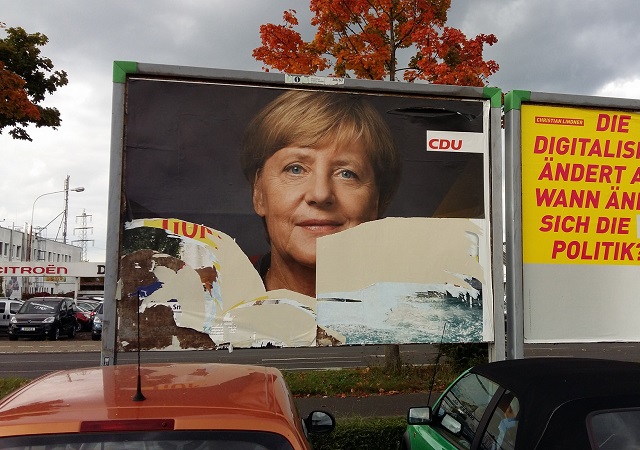 German Chancellor Angela Merkel’s hope of securing a fourth term possibly came to an end last night after the pro-business Free Democrats (FDP) unexpectedly pulled out after four weeks of coalition talks. The collapse of the three-way talks between the Christian Conservatives, the leftist Greens, and the Free Democrats could bring the Merkel era to an abrupt end after 12 years of reign.

The political shocker came just two months after Merkel declared herself victorious in the Bundestag election. “We have a mandate to form a new government, and no government can be formed against us,” Merkel had told her cheering supporters election night. Her Pyrrhic victory came at a heavy price for her Christian conservative party (CDU), which posted its worst election result in almost 70 years — winning just above 33 percent of the vote.

Mass immigration was the biggest issue of contention, with both Merkel’s Bavarian sister party, the Christian Social Union (CSU) and the center-right FDP opposing a liberal Family Reunion Policy that would allow asylum seekers to send for their families. The German Greens, on the other hand, were more supportive of Merkel’s stance on migrants and advocated a wide-open door policy for refugees and migrants. In the end, the Free Democrats chose to listen to their base that wanted no truck with Merkel’s disastrous Migrant Policy. “We were voted for to reverse the current trends, but we couldn’t reach an agreement,” FDP chief Christian Lindner told his supporters on Twitter.

Once her biggest allies and cheerleaders, German newspapers were busy writing Merkel’s political obituaries this morning. “Merkel has undoubtedly failed,” read the headline of the lead editorial published by the German weekly Die Zeit. Failure of the coalition talks is Merkel’s downfall too, commented the German daily Tagesspiegel. “End of the talks could be the end of Merkel too,” the newspaper added.

The leading German newspaper Die Welt explained the reasons behind the failure of the talks:

Did Angela Merkel lose the confidence of the people on November 19, 2017? The fate of the coalition talks, however, was sealed on September 5, 2015. Merkel’s decision to open the German borders to refugees — for various reasons — was the reason why the the first-ever multi-party coalition in Germany has failed to materialize.

The differences between the Greens, FDP and CSU on the issue immigration were decisive in sinking the negotiations, especially over the question of family reunions. That was not the only reason, as FDP chief Christian Lindner explained. There were other differences as well.

Even Angela Merkel didn’t consider it to be the decisive stumbling block. However, without the altercation over the immigration, other contentious issues might not have been brought up by the Greens or the CSU with such vehemence that apparently impacted the coalition talks and led to their failure. [Translation by the author]

Merkel’s previous coalition partner, the leftwing Social Democratic Party (SPD), has already excused itself from joining a future Merkel-led government. This morning, the SPD reiterated its position to sit in the opposition. With 20 percent of the vote, the world’s oldest socialist party posted its worst post-war performance in the September election and needs times to recuperate.

The undisputed winner of the Sunday’s debacle is the right-wing AfD party. After winning 12.6 percent of the vote and securing the third slot, the party’s poll numbers have been on the rise ever since. Last week the party was polling at 13.5 percent and the failure of the coalition talks will undoubtedly add a few more percentage points to that tally.

Regardless of whatever the German media and political pundits say, going by Merkel’s past record, its too early to write her off. After wreaking havoc on her country in the wake of the self-inflicted migrant influx and nearly ruining her party in the last general election, Merkel’s urge to remain in power shows no sign of weakening. She may still form an unstable minority government or manage to rope in the overtly reluctant Social Democrats.

Constitutionally speaking, the ball is now in the court of the German President Frank-Walter Steinmeier, a lifelong Social Democrat. President Steinmeier is openly opposed to the prospect of a new election and has called the SPD to get into talks with Merkel over the creation of a coalition government, saying he expected “every party to show the willingness to talk”. If the president’s plea, however, fells on the deaf Socialist ears, Germany will be facing new election in about two month’s time.

Video: What happens if Merkel can’t form a governing coalition?

The German population is finally starting to wake up to the destruction that Merkel’s idiocy has wrought.

Let’s hope they boot the dangerous fool for good.

notamemberofanyorganizedpolicital in reply to Observer. | November 20, 2017 at 12:23 pm

Merkel would make herself the female Adolph Hitler if she could.

That’s my opinion and I’m sticking to it!

She has been the longest serving chancellor, except for some guy back in the 1930s and 1940s that they don’t talk about much. Looks like she will not break his record.

She still has to beat Helmut Kohl. Altogether, he was chancellor for about 16 years.

“End of the talks could be the end of Merkel too,” writes German newspaper,

Germans can only hope…

Maybe Germany will be done with Mutti Merkel.

Why don’t they just burn down the Reichstag?