Any discussion of tax reform shifts quickly to “tax the rich” with avowed socialist Senator Bernie Sanders (I-VT) and Sanders wannabe Senator Elizabeth Warren (D-MA) at the forefront of the Democrat 2020 presidential hopeful pack.  There are numerous problems with this philosophy, not the least of which is that it’s a political slogan not viable economic policy, but that doesn’t stop the left.

Earlier this year, Seattle passed a “tax the rich” scheme that was immediately challenged.  This week, Superior Court Judge John Ruhl ruled that Seattle does not have the authority to impose such a tax.

In July, the Seattle Times reported:

The measure applies a 2.25 percent tax on total income above $250,000 for individuals and above $500,000 for married couples filing their taxes together.

“Seattle should serve everyone, not just rich folks,” software developer Carissa Knipe told the council before the 9-0 vote, saying she makes more than $170,000 per year.

The council’s finance committee cleared the tax last week and increased the rate from 2 percent to 2.25 percent.

Opponents have argued the tax would violate state law and the state constitution, while proponents have said it would make Seattle’s tax structure more fair and that they want to test the legality of taxing income.

The Freedom Foundation filed suit on the grounds that the tax violates state law and the state constitution, and Judge Ruhl agreed.

Seattle’s controversial tax on the wealthy failed its first legal test this week after a judge ruled the new ordinance violates state law – but the city isn’t backing down and vows to appeal, setting the stage for a Washington State Supreme Court showdown.

King County Superior Court Judge John Ruhl ruled in a Wednesday that Seattle did not have the authority to impose the tax because state law prohibits tax on net income.

City Attorney Pete Holmes called the decision “disappointing” but, in a joint statement with Seattle Mayor Tim Burgess, said their goal to eliminate the state’s “over-reliance on regressive sales taxes” would continue.

“We are also living in a time of extreme income inequality that corrodes our social compact and causes many to wonder whether wealthy individuals are paying their fair share,” they said.

Opponents of the tax immediately hailed the ruling as proof Seattle officials knew the tax was legally flawed but still pushed it through.

“In our system of government, the Legislature makes laws and the courts interpret them,” Freedom Foundation Chief Litigation Counsel David Dewhirst told Fox News in a statement. “If you want to change the existing tax laws, you can ask your legislator to introduce a bill, or you can sponsor a ballot initiative. And if you want to amend the Constitution, there’s a process for that too.”

Amending the state Constitution appears to be the goal of this city tax.  Washington does not have a state income tax, and progressive leaders in the state want one but don’t apparently want to take their case directly to the people of the state.

Councilmember Kshama Sawant told Fox News in July that the need for the tax is “crystal clear.”

She said the city isn’t backing down – and says Seattle is ready to duke it out in court in what’s likely to be a very costly legal battle.

“We will no longer tolerate a system that buries poor and working class people in taxes, while giving big business and the super-rich yet another free ride; a system that underfunds affordable housing to the point where thousands are homeless, a system that criminally underfunds education,” Sawant said.

. . . .   City Attorney Pete Holmes called the decision “disappointing” but, in a joint statement with Seattle Mayor Tim Burgess, said their goal to eliminate the state’s “over-reliance on regressive sales taxes” would continue.

“We are also living in a time of extreme income inequality that corrodes our social compact and causes many to wonder whether wealthy individuals are paying their fair share,” they said. 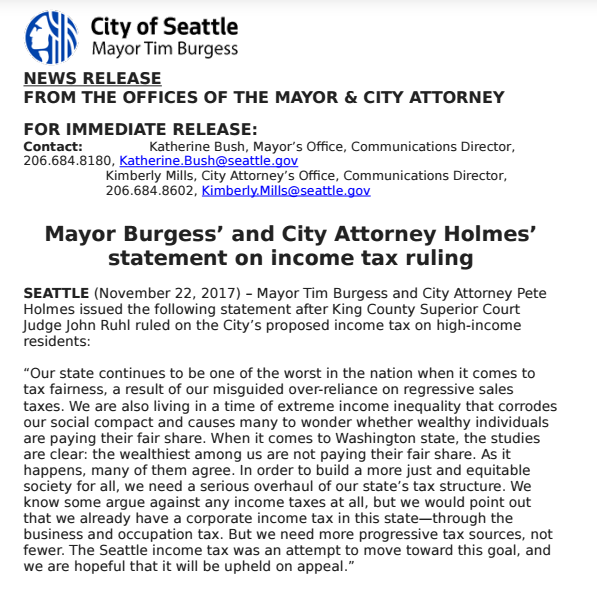 In stating that their goal is a “serious overhaul of our state’s tax structure,” Burgess and Holmes acknowledge that the Seattle tax on the wealthy is intended to “nudge” Washington state toward a state income tax.

Washington is one of seven states in the country that does not have a personal income tax.

Analysts at the Washington Policy Center also note the Washington Supreme Court ruled in 1951 to invalidate the state income tax. Further, a law passed in 1984 prohibits any city or county from levying a tax on net income.

The state’s voters have rejected the idea of an income tax nine separate times. Washington voters did approve an income tax in 1932, but the state Supreme Court ruled the measure was unconstitutional.

The next stop for Seattle’s tax on the wealthy is the state Supreme Court, where it will all but certainly be struck down.  It will be interesting to see how the law’s proponents intend to turn this cynical ploy into a state income tax.

Councilmember Kshama Sawant told Fox News in July that the need for the tax is “crystal clear.”

If true, then you’ll have no problem when you go about doing this the proper way – by asking the people themselves if they want to change their state constitution.

This is part of the Clinton Archipelago’s west coast island chain that has already functionally seceded from the United States. They openly claim the right to nullify Federal law, the Bill of Rights is optional for them depending on which side it benefits, and the rule of law is considered a quaint anachronism there.

They will let neither state law nor the state constitution stand in their way. After all, who is going to enforce a state court ruling against it? The State government?

And who is going to enforce a Federal court ruling against it? Or for that matter, even contest it in Federal court? Sessions?

Sessions really is a disappointment.
when he was a drone in the senate, he was one of 100, so couldn’t that much damage – but as ‘head’ or is it tail of DOJ, he
can and has done a lot of harm.

Not only is Swamp Sessions not part of the solution, he’s part of the problem: a boehner, but without the booze and alcoholic blubbering.

We’ve got to ratchet up the pressure to get him out of the AG position.

What the **** are you ranting about? The judge struck the tax down. They can’t collect it. If they try people won’t pay it, and there is nothing they can do to make them.

The Leftist Credo is “I believe there is no reason to ask permission when I can rely on an activost judge.” One would have thought the Seattle Lefties could have at least found a judge on the King County Superior Court to side with them. That they didn’t doesn’t bode well for their quest.

Don’t they have to go through the Court of Appeals before they get to the State Supreme Court? I thought only rulings on contracts could bypass the CoA.

“We will no longer tolerate a system that buries poor and working class people in taxes, while giving big business and the super-rich yet another free ride..”

Note that Kshama Sawant doesn’t fall under the tex. “Taxes for thee, not for me”

with all the rich LibRu;es in Washington State –
why aren’t they VOLUNTARILY giving gifts to the Cities and the State ?
Show us deplorables how ‘generous’ you really are.

Washington’s Supreme Court always strikes down any referendum that reduces a tax or attempts to restrain the taxing authority of the legislature. While they should strike down this illegal tax, they are not philosophically opposed to it. I would say the same about any attempt by Seattle to enact a gun control ordinance.

Agreed. Since the judges are elected and King & Pierce counties effectively dictate all ‘at-large’ elections to the rest of the state I am less than confident that these judicial activists will not find an escape clause in either the Constitution, prior decisions, or votes that allow the state to steal more money from citizens. After all, funding the government left requires lots of money; someone must pay for it.

The cat is out of the bag, so to speak.

The ny times already gave the pre-approved marching orders to the army of ignorance across our nation: communism is cool:

We need to accept we’re not getting out of this mess without a great conflagration. If we don’t accept that and avoid it, we’ll wind up in labor camps, with lois lerner as commandant.

The bullet we dodged with hillary klinton was the size of a meteor that killed the dinosaurs. Only it would have killed us instead.

In 2016, hillary klinton said we need camps for her political enemies:
https://www.youtube.com/watch?v=Cs_8p0m4sR4

The next step after losing at the state supreme court will be to file an initiative to allow taxes on income. It will be sold as a tax that only the rich will pay and only a “small percentage”. If passed it will be raised every few years and those counted as “rich” will begin at ever lesser amounts until it affects just about everybody

Can’t the city council just round up the ‘rich’ and take their money at gun point? I know, I know. No guns in Seattle. They’re against the law. Just like a state income tax.